Considering its status as an upstart newcomer, the AfD (Alternative für Deutschland, Alternative for Germany) did extremely well in Sunday’s elections in Saxony-Anhalt, Rhineland-Palatinate and Baden-Württemberg. But the descriptor “extremely well” must be understood in the larger context of German politics. After being relentlessly demonized by the press and the leaders of all mainstream political parties, in the face of procedural obstacles and censorship on social media, the AfD still managed to a showing of 12%-24% in the polls. It’s a major change, but not enough to swing the German ship of state away from the iceberg it is rapidly bearing down on.

Rembrandt Clancy has compiled a summary of the results, including translated excerpts from German media. 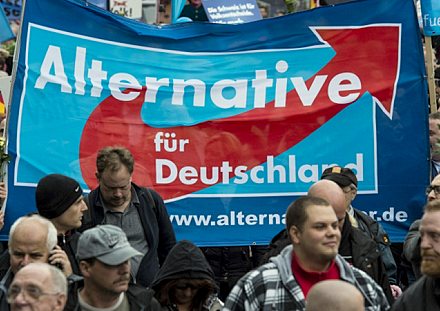 An Overview of German Regional Elections
by Rembrandt Clancy

The legion of political parties is like an alphabet soup to most non-Germans, and I have not found much about the 13 March elections that convincingly deals with the real implications, if any. I say “if any” because the question is open as to whether the AfD’s gains are enough, especially since there appears to be so little time left.

In Baden-Württemberg, Winfried Kretschmann — an old Maoist from the early 1970s — and his Greens survived handily with 30.3% of the vote and he will remain Minister-President; but he lost his SPD (Socialist) coalition partner to fourth place (12.7%), after the AfD (15.1%). The CDU took second place (27.0%). These results are taken from Wikipedia on the assumption they can be relied upon for having the latest numbers, which may still be provisional.

As for the uncertain implications of these elections, I offer one example because of its cultural Marxist significance for all the German states. It has to do with the green-red Bildungsplan 16 (Educational Plan 16) in Baden-Württemberg. It remains to be seen what will happen to this radical sex education package which embraces all levels of the educational system, from grade one, and spans all subject areas. Kretschmann had planned to sign it into law surreptitiously before these elections, but apparently did not follow through. Opposing the Bildungsplan, there have been seven demonstrations in Stuttgart spanning nearly two years, the last one being held on 28 February, with 4,500 participants, just slightly fewer than the peak number in the penultimate demonstration. These rallies go under the name of Demo für Alle, modelled after the much more numerically impressive La Manif pour tous. Will the political change lessen the chances that this plan will survive?

If one examines the Landtag results for Baden-Württemberg for 2011, one notes that the CDU, the party with the largest single number of votes (39.0%), did not form the government; instead, the two Leftist minority parties formed the green-red coalition (Greens and SPD). This outcome may seem obvious to a German, but not to a Canadian, where a constellation like this leads to a minority government.

To put the numbers in perspective: according to Kopp Online thirteen million persons were called to vote in these state elections, and they constitute 20% of eligible voters in Germany; therefore 13 February was a kind of mini-federal election. These numbers materialised against a background of a massive anti-AfD campaign conducted by the old parties, media and other organisations, according to Kopp.

And just yesterday morning (14 March) there was the following news:

Prior to the Landtag elections, all Pegida administrators were suddenly blocked from Facebook. The movement judged this as an attempt at censorship and accordingly published a press release. The site continues as before.

The alternative news portal, MMnews, reported on 26 February that the Dresden Facebook presence, which has a 200,000 strong following, could be the object of future censorship. It has been learned, based on a “trusted source”, that Facebook, due to pressure at the level of the federal government, is to block or completely expunge sites like Pegida and their offshoots, according to the portal in an exclusive article. (Epoch Times)

The AfD now sits in eight state parliaments. In Baden-Württemberg the AfD reached 15.1 percent of the vote, just ahead of the SPD (12.7%); in the Rhineland Palatinate 12.6% and in Saxony-Anhalt the AfD achieved a remarkable 24.2%, the second-largest party in the Landtag next to the CDU, which reached 29.8%. Kopp Online makes the following summary comments:

It became the projected anti-Merkel warning election and it will cause much unease for many in Berlin, now that it comes down to the highly-paid mandates of the CDU and SPD functionaries. The reality deniers in the Konrad Adenauer House [the party headquarters of the German Christian Democrat Union] will not succeed in finding anything positive in this evening, although they have been trying to do so naturally in the usual manner since 6:05pm.

The Volkspartei SPD is dead. Under [Sigmar] Gabriel [Federal Minister for Economic Affairs and Energy] and [Heiko] Mass [Federal Minister of Justice] it mutated in a few years into a leftist splinter party. After just 12% in Saxony and Thuringia and no more than 20% in Bavaria, the SPD experienced an unparalleled debacle in Baden-Württenberg and Saxony-Anhalt, and attained in both states no more than 13%.

The election winner of the evening is without doubt the Alternative für Deutschland. Neither the BILD [newspaper] nor the defamations by the red-green functionaries made against the party, together with a never-before-seen media campaign against the party, could change anything. The countrywide double-digit results for the AfD also document the end of the opinion monopoly of the mainstream media.

26 thoughts on “An Overview of German Regional Elections”