As reported in last night’s news feed, a man walked into an armed forces recruiting center in Toronto and stabbed two soldiers. He was subdued by six or eight other soldiers before he could stab anyone else. 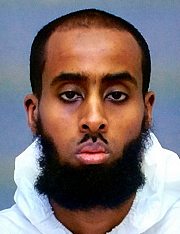 I’m pleased to report that the incident is now known to have a Mohammed Coefficient of 0%. However, it’s still quite possible that the alleged crime had traces of cultural enrichment, since the suspected assailant is named Ayanie (or “Ayanle”) Hassan Ali. None of the reports refers to the fellow’s ethnicity — he is in fact a “Québécois”, since he was born in Montreal — but judging by his photo, he appears to be a Somali.

Toronto Police Chief Mark Saunders hastened to admonish the public not to engage in Islamophobic thinking concerning the incident: “One of the things I want to be very careful of when it comes to the national security piece that we don’t go do that Islamaphobia nonsense.”

And quite rightly. The fact that the young miscreant invoked the name of Allah is nothing more than a data point. The investigation is still in its early stages. We need to learn a lot more about this youngster before we make any judgments. Let’s wait for an evaluation by the mental health professionals.

And, in the meantime, what if some other mischievous youth attacks non-Muslims with a sharp implement while yelling about “Allah”? No, it’s still too early. We need more data points.

How about a dozen more such attacks? No.

A hundred? A thousand? No.

Even then it would still be Islamophobia to make any judgments. And it will remain Islamophobia right up until the day when CBC announcers begin their nightly TV newscast with the words: “In the name of Allah, the Most Beneficent, the Most Merciful…”

The most detailed report I’ve seen so far on yesterday’s multicultural mayhem was published by The Times Colonist:

TORONTO — A man who allegedly said Allah instructed him to kill was charged Tuesday with stabbing and wounding two uniformed soldiers at a north-end military recruitment centre a day earlier.

While investigators were probing possible terror links, the city’s police chief said there didn’t appear to any connection to terrorist groups, although it appeared the man had deliberately targeted military personnel.

“To date, there is nothing to indicate the accused is working with anyone or in concert with any organization,” Chief Mark Saunders said. “It will take some time to have a complete picture.”

The incident occurred mid-afternoon Monday, when a man walked into the government building that houses a Canadian Armed Forces recruitment centre on the ground floor.

He walked into an office with a “large knife” in hand and began striking a uniformed master corporal, who fell to the ground, Saunders said. The soldier was able to get to his feet, at which point the suspect slashed his right arm.

As military personnel moved civilians to safety, police said he tried and failed to slash a female soldier before other soldiers were able to subdue him and hold him for police. Another military member was stabbed trying to apprehend the suspect.

Following the arrest, the accused became “non-responsive,” Saunders said, meaning he refused to answer any police questions. He was taken to hospital because of his behaviour. The two soldiers required treatment for minor injuries.

Saunders said Toronto police were working with federal security and anti-terrorism forces on the investigation. At the same time, he warned the public against any anti-Islam sentiment in the aftermath of the attack, saying Islamic extremists are relatively tiny in number.

“One of the things I want to be very careful of when it comes to the national security piece that we don’t go do that Islamaphobia nonsense,” Saunders said. “I don’t want this categorizing of a large group of people; that would be very unfair and very inaccurate.”

Police named the suspect as Montreal-born Ayanie [sic] Hassan Ali, 27, who moved to Toronto in 2011. Ali was charged with several offences, including two counts of attempted murder and aggravated assault. He was due to appear in court later Tuesday.

Saunders said the Canadian citizen had no previous criminal record and he appealed for anyone who might have helpful information to contact them. Police were obtaining search warrants for the man’s west-end home. They also said he had family, but did not elaborate.

For a slightly different take, see this article from AFP via Yahoo News:

Ottawa (AFP) – A man who stabbed two Canadian soldiers at a military recruiting office in Toronto on Monday said he was acting on orders from “Allah,” police said.

Police chief Mark Saunders told a press conference, however, that suspect Ayanle Hassan Ali, 27, appears to have acted alone and that so far “there is nothing to suggest the accused is working with anyone or in concert with any organization.”

The alleged assailant entered a government office building Monday afternoon and without provocation stabbed a soldier in the arm at the reception desk, then sought to wound a second soldier before he was subdued.

Ali was charged Tuesday with attempted murder, aggravated assault, assault with a weapon and possessing a dangerous weapon. He was scheduled to make a brief court appearance in the afternoon.

Asked if investigators viewed the assault as an act of terrorism, Saunders said: “We’re looking into it.”

The Toronto police have asked federal prosecutors and security agencies for help in determining if there is a link to organized extremist movements, he said.