We reported yesterday on the expressed wish by Willem den Hertog, a Dutch Labour Party leader, that Geert Wilders might die. Later in the day, after much controversy over his remarks, Mr. den Hertog resigned, on the advice of his party.

Our Dutch correspondent H. Numan sends the following background and analysis on the Den Hertog affair. 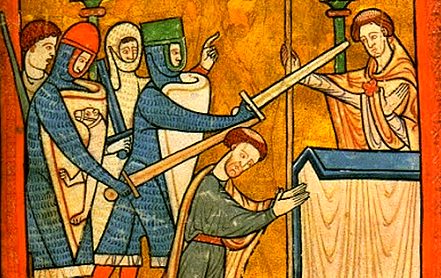 Will No-One Rid Me Of This Troublesome Priest?
by H. Numan

Those are the words of King Henry the Second. It’s a part of British history, but since 2002 also an important part of Dutch history. In 2002 Pim Fortuyn was murdered, on the eve of national elections that would have made him prime minister. It was the first political murder in centuries in our country.

It didn’t came as a bolt from the heavens. Fortuyn knew he was in serious danger. He had asked for protection, but this was denied. Politicians simply didn’t get bodyguards, in that now distant but relatively trouble-free past.

Fortuyn was vilified by left-wing politicians and all media (we don’t have conservative or right-wing media) on an epic scale. Anything goes, name him whatever evil you can think of. The person who was most outspoken about Fortuyn was Ad Melkert. Shortly after the murder of Fortuyn, he had to retire from policies because of that. See it as a damage control measure. Ad Melkert was old; he could be painlessly sacrificed to prevent more damage.

The link gives you the sanitized version of the events. In real life Ad Melkert called Pim Fortuyn names that would now land him in jail. He surely wasn’t the only one, but he was by far the most important. He was at that time leader of the PvdA (Labour) party and their candidate in the elections. As Mr. Spekman is now, minus being candidate for prime minister. Immediately following the murder on Fortuyn, Geert Wilders was given a team of bodyguards.

That murder hit the country much harder than the murder of JFK did in America. It was the first political assassination ever. I’m pretty good at history, and can’t recall one in the past. All left-wing politicians (minus queen Beatrix) shed crocodile tears. No, they had never really meant it when they said Pim Fortuyn was Hitler reincarnated. It was metaphorical! Just an innocent comparison.

However, that bovine manure was not lapped up as expected. People didn’t buy it. All political parties, none excepted, and all media, again none excepted, had vilified Pim Fortuyn into a virtual ogre. One can apologize for a mistake up to a limit. This was far beyond it. Unique in Dutch history, Pim Fortuyn was elected from the grave. Literally. His party did win the elections, but within six months that cabinet collapsed, mainly due to infighting and the incompetence of Fortuyn’s party.

Now you understand why anyone vilifying Wilders is taken extremely seriously in our neck of the woods. It happened before, and we don’t want to see it happen again. That’s why Mr. Spekman simply had to fire his party apparatchik in Katwijk. The Labour party isn’t doing well at the moment. The very last thing he wants to hear is his slinking electorate saying: Here we go… again! It’s one thing for him to suggest Wilders is evil, once in a while. It’s quite another if a little party nitwit starts ranting it.

What Mr. Den Hertog actually said was: “We all hope that Wilders dies of a heart attack in bed (whether or not between the legs of a left-wing member of parliament).” and “If a bullet is necessary, one that is big enough to carry the text ‘from a grateful nation’ on it.”

That’s something you expect from a ten-year-old boy. If your kid is older than that, you’d expect more creativity from him. However, Mr. den Hertog is not a little boy. He’s quite important on a local level. He’s the local party boss. As such, one would expect him to behave according to his social status, and not to his personal fetishes.

Of course Spekman would let him rant. It’s just that he himself overstepped the boundaries of political etiquette. Supported by his second in command, Diederik Samson, who said that Wilders was simply whining for attention. Had Spekman not ranted his gaffe, den Hertog wouldn’t have had a problem at all. This was just a little bit too much.

Actually, I am somewhat surprised. I never expected his removal. I expected an (insincere) apology. Or perhaps his resignation. That Mr. den Hertog was fired is a clear signal that the PvdA knows they are in serious political trouble.

The fact that the PvdA had to fire den Hertog is something hopeful for us. Spekman will never say it aloud, but firing a relatively unimportant party chieftain is indirectly admitting that he very much fears the coming elections.

Those elections will likely follow the fall of the cabinet in May. The cabinet is limping along from crisis to crisis. Hoping and praying for miracles that might save them. In March Wilders will face a trial by a kangaroo court. Followed by the national referendum on the 6th of April. I cannot imagine the cabinet surviving the outcome of both. No matter the outcome of the trial, whether or not Wilders and/or the PVV are convicted, that party will get a lot of (virtual) votes out of it. The referendum is already a foregone conclusion: about 70%-80% will vote “no”.

One of these two crises the cabinet might be able to survive. Not both. I expect the cabinet to resign shortly after they have admitted defeat in the referendum.

19 thoughts on “Will No-One Rid Me Of This Troublesome Priest?”