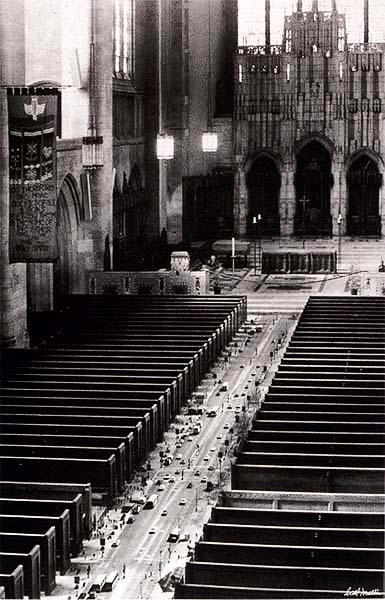 Yesterday was Fat Tuesday and today is Ash Wednesday. So ends the part of the liturgical year called “Epiphany” (observed by some as “Ordinary Time”, as is the long summer called “Pentecost”. As a kid, none of it was ordinary time to me), and begins the rigorous season of Lent.

Here’s a calendar — several of them — laying out the
Liturgical Year as a complete cycle, each part corresponding to some aspect of Christ’s life, each section stylized and showing up in all the seasons and their colors. It must have been a great aid in the days before widespread literacy.

The late Scott Mutter created this image. I don’t know if he was also the author of the caption underneath:

We Live Under a Vast Canopy Woven By The Ages, but it fits the scene well, even expanding on it. At least it does for me.

I have a large poster-sized version which needs a new frame. I ponder this image nearly every day. One reason is that it recalls an essential part of my childhood.

Between the ages of five and ten I lived in a Catholic orphanage in the city. The church to which the orphanage belonged was/is that kind-of-American Catholic Gothic dating from the early teens. It has since been dedicated as a Basilica, but back then it was simply “the Catholic Church downtown”. There was an early morning mass attended by working people and a second mass at noon for people on their lunch hour. And clots of old people at both.

Yeah, a different world back then…

That was when the Tridentine Mass — the Latin one — was considered eternal. After Vatican II the Church went native and Masses were said “in the vernacular” (so there went the universal part). Given how many hundreds of years the Tridentine Mass was the only one on offer, there was significant pushback. Despite the bureaucratic hope in Rome that the attraction would age out as the old folks died off, that never happened. There are widespread pockets of resistance, still.

But back then, it was simply the Mass. And if you were six years old and using a Missal (the Catholic prayer book) to follow that Mass each morning at 6:30 it felt quite eternal. The main thing you thought about — or tried to avoid thinking about — was breakfast. As the priest droned on in Latin, his back to the people, it could be hard to stay awake.

No hymns in the hurry-up early version done in the half-light of January mornings — just the noise of my stomach growling. I can visualize us now, “the orphans” clumped together to stay warm, and looking devout; it was hunger. If you were the restless kid I was, you found work-arounds. For me, it was word games to play with the Prayer Book. The easiest, the one I could do while looking pious, was to see how many smaller words could be made from a long Latin word like, say, Confiteor. Heck, you could even move your mouth to count and the vigilant nuns thought you were praying.

Yes, I grew up to be a mean Scrabble player. The wages of sin.

This poster appeals to me not only because of the caption, but also because it encapsulates my early childhood memories of the daily routine of church in the city: honking horns, noisy trucks, the mixed smell of candles, old incense, cold stone, truck and lumbering bus diesel fumes and an empty stomach all in one gestalt.

It is customary to ‘do’ something for Lent in order to prepare for Good Friday and Easter Sunday. I used to attempt to give up talking when we were supposed to be silent, but a silence maintained from six a.m. to our morning recess at 10:30 was more than my Irish DNA could ever have hoped to cope with for so long.

I told Bishop Guy Leven-Torres recently that he and I could stand to be a bit less prolix. so I’ll try for brevity this coming week and if it proves too rigorous, I’ll rummage around in my soul for something else… hmmm… I’ll have to think about that one.