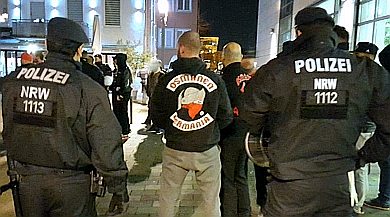 The following article from Die Welt concerns the appearance of a new culturally enriched motorcycle gang in Germany that aims to rival the Hells Angels and other established gangs in violence and criminal activity.

The biker gangs are called “rockers” in Germany, a leftover term from early-sixties Britain. Nash Montana, who translated the article, says: “These enrichers don’t even use bikes. They probably don’t even know how to hold up a bicycle.”

“We Are Coming and We Will Take the Country”

In the ‘rocker environment” [rocker milieu is German for “biker environment”], the Osman Germania Boxing club is the fastest-growing group. The police are concerned. The club shows itself to be martial — even towards the Hells Angels.

The muscular rapper boxes into the camera and yells: “Frontal attack now, understood?” Around him stand broad-shouldered, brutal-looking men. They wear leather jackets with the label “Osmania Germania”. They repeatedly direct guns at the camera.

The video was posted on Facebook, and right at the beginning the group formulates their aspirations: “We are coming and will take the whole country,” says the voice-over, while pictures alternate between wild hordes of horsemen in the desert and the posing rockers. “Men, who will stand their ground in the battlefield to the last drop of their blood,” the voice tells us.

The new rocker group Osman Germania Boxing Club is causing trouble for the police nationwide. The group was formed in April of 2015 in Hessen and is now considered to be the fastest-growing group in the German rocker milieu.

Among the estimated 700 members are many Turkish migrants. They met at a “World Meeting” in Duisburg in October 2015, and one month later they organized a “Germany Meeting” in Berlin.

Just how dangerous some of the members are was shown, when last end of January in Neuss and Duisburg 97 members were controlled by the police. “For a large number of these persons there is already criminal intel in the Police — mostly for brutality and the narcotics trade,” said a recent report by the Interior Ministry of the North Rhine-Westphalia state parliament.

Still there is a lack of precise knowledge about the Club among the police. “Concrete evidence concerning activities of the group or of individual members is only known in a few specific locations. The locations, however, of the individual chapters’ club houses are not known. The members often meet in restaurants and hookah bars,” it says in the report directed at delegates of the home affairs select committee.

On the Internet the group presents itself as adept at martial arts and combat-ready. This is to be understood as a declaration of war against established biker gangs such as the Hells Angels.

“We start from the premise that the Osmans want to secure themselves market shares in the illegal businesses of gangs,” says Dietmar Kneib, the responsible director for organized crime in the office for criminal investigations of North Rhine-Westphalia (NRW).

They are also active in other countries and possess “definite personnel potential”. The police are observing the group very closely.

In North Rhine-Westphalia the group has gotten the attention of the biker gang Brothers MC, which was established in 2014 by a former member of the Bandidos. They have chapters in five cities, and 74 members. Here as well, the police are lacking intel. It is clear, however, that this club as well has violent and combat-ready members.

“Members of the Brothers MC became known to the police by the end of 2014 and the beginning of 2015 through various conflicts, especially with members of the Hells Angels MC, in the Düsseldorf and Cologne area,” the NRW Interior ministry explains in its recent report.

“Zero Tolerance” for Combating Them

The NRW administration had established a central project to combat gang criminality under the name “Projekt 124” in 2010 with the State Office of Criminal Investigations: Thus did the NRW authorities exchange information with colleagues in other states and with neighboring countries, for instance. The LKA, State Office of Criminal Investigations, collects information about organizational structures of the gangs and has also increased the frequency of identity checks.

“Criminal rocker groups are told in no uncertain terms, that only the state possesses the monopoly on legitimate use of force. The North Rhine-Westphalian police tolerate zero use of force by these gangs in their self-proclaimed territorial and possessive fights, nor any lawless territory,” the NRW emphasizes. it is understood that there is “zero tolerance” when combating these gangs.

For those opposing them, the fast establishment of such a new group is proof of the large deficits in security. The CDU-representative Gregor Golland criticizes: “It is shocking how literally out of nothing several hundreds of members came together and built chapters nationwide. NRW Interior Minister Ralf Jäger says that every rocker will have his colors taken away. So he takes away the colors from one guy, while two other put on new colors. There is no way to master this situation with existing resources.”

In the opinion of Marc Lürbke, the interior speaker for the FDP legislative fraction, NRW is still a “feel-good oasis for rockers”. The state parliament still has no viable plan on how this type of organized criminality should be confronted. “The criminal potential of these rockers has hardly even leveled off,” explains Lürbke. There is “not enough control pressure” on the more than 70 known enterprises and establishments of rockers.

The video in the article is about hells angels getting their colors back. (There was a ban on biker colors, but it’s been lifted).

I also searched for the Osmans on Facebook and found various pages for them. This is a closed group page on Facebook, but you can see the members of the group.

And then they have a lot of Facebook pages for the local chapters.