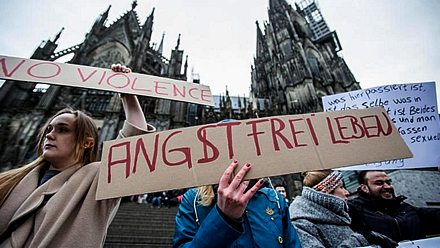 The following essay by Henryk Broder on the confluence of the Groping Jihad in Cologne and the Gender/Culture Wars was first published in Die Welt. Many thanks to JLH for the translation:

Was What Happened in Cologne a Pogrom?

What links women-haters and Jew-haters becomes apparent in the attacks on New Year’s Eve and the debate afterwards.

By now, everything has been said about New Year’s Eve in Cologne. Now we have to wait and see what police investigations yield, whether criminal procedures will follow and whether there will ultimately be verdicts. That could take a while. Enough time to ponder one striking feature which has thus far received no attention. How is it that the most absurd, coarsest and most misogynistic commentary is written by women, who express more understanding for the perpetrators than the victims?

Who arbitrarily interpreted, eagerly contextualized and radically relativized the happening at such length, that you have to ask: What’s all the excitement? Don’t these things happen everywhere all the time? What was so special about Cologne?

The Rape Culture, “which apparently characterized Cologne’s New Year’s Eve” — as could be read in the Berlin Tagesspiegel — was “also a part of German culture.” Since “by far the most sexual attacks and rapes are not committed by mobs in railroad stations, but by the victims’ own husbands and friends.”

Were the Women to Blame?

Even more remarkable than this logic — which could just as easily be applied to murder or manslaughter — is the fact that this article was written by two women. One of them specializes in reporting on the environment with emphasis on climate change and use of energy, the other on immigration, minorities, civil rights and gender politics.

Their cooperation led to a hypothesis which is by no means meant ironically: “Possibly there were women there who were not victims at all, but of the political persuasion that perpetrators with an immigration background or refugees who made use of the chaos on the cathedral square for sexual attacks, deserved to be deported. They may be hoping to accelerate that process with a criminal charge.”

So the men were not taking aim at the women, but the women at the men, in order to give the authorities a reason for deporting the alleged ‘perpetrators with an immigration background.” It was an open question whether the women were actually sexually molested, or the “attacks” had taken place to achieve this goal. In which case, the networking must have been optimal, otherwise a “concerted action” in 12 federal states would be inexplicable.

The Tagesspiegel article was possibly the crassest of its type, but not the only one by far. The word of a “rape culture” ran through the articles like a leitmotif, underlined by the notation that rape in marriage has only recently been declared a crime. It was also a popular claim that sexual attacks were the order of the day at Carnival and Oktoberfest. The ZDF (Second German Channel) moderator Dunja Hayali summarized all these insights in one sentence on her Facebook page: “It is not foreigners who molest women, but a******s” — which might be regarded as a variation on the general suspicion, this time directed at the hitherto blameless species of a******s.

As mentioned, all these articles in which self-denial was differentiated bore the signatures of women. Men who took a position on the night of horror distanced themselves unmistakably from the perpetrators. (The exception was Jakob Augstein, who fantasized about a flashmob.) A Green politician in Hamburg went so far as to say that every man is “a potential rapist, including me.”

And rounding out the picture is one more example of behavior that exceeds all boundaries of solicitude. Amelie Fried, a successful writer, TV moderator and, when necessary, also a feminist, wrote a short essay about how she and her family had organized a Christmas celebration for unaccompanied minor refugees years ago. There was gingerbread, fruit and sweets and they all sang “Silent Night” together. Anyway: “At the end of the party, our guitar was missing.”

Amelie Fried and Her Guitar

First, Mrs. Fried recalls, she was “disappointed” then “amused” and finally “ashamed.” How in Heaven’s could she assume that “the youngsters should be grateful to us”?

It was exactly the other way around. “We had reason to be grateful to them. In a single stroke, they had adjusted afresh those relationships of ours which had slipped out of kilter.” And “We were happy that the youngsters had kept the guitar. The lesson we had learned from that was easily worth more than the instrument.”

And that’s how things were today too. It must be humbling, “to take from us.” But we could “give these people back a bit of their dignity by expecting no gratitude.” And we can tell ourselves: “If we manage to integrate those people properly into our country, one day more will come back from them than we have ever given them.”

Even Mrs. Fried’s humanity is not free of cost-benefit analysis — The refugees as human capital to be invested in, so that the yield will be appropriate. Or we could just buy Greek government bonds. Is this all that Amelie Fried learned after “her guitar” had been kept by the youngsters?

She is free to give away her iPad, her children’s iPods and her husband’s iPhone; to set up a soup kitchen in her living room; have as many benefit evenings as her calendar will allow. She should just please not claim she has learned some kind of lesson. Because, like many of her comrades-in-arms, she has to this day not grasped what happened in Cologne and other places on the the night from December 31st to January 1st.

It was a pogrom. It is only astonishing that no one yet has come to this idea, at a time when everyone, from vegetarians to “concentration camp chickens”[1], who feels unjustly treated competes for the title of “the Jews of today.”

As is suitable for a pogrom, there were perpetrators, victims and observers. The perpetrators were ruthless, the victims were helpless and the observers observed. It is irrelevant whether they were actual rapes or “only” sexual assaults according to penal code §177StGB. A person who has to run the gauntlet and, in the process, is grabbed, hassled, hit and mocked, is experiencing a rape. It is not necessary to be a historian or an expert in anti-Semitism to recognize parallels to the anti-Jewish pogroms from the time before the Holocaust.

Unlike Jews, women are not a minority. And no one is working on the “final solution to the woman question.” But hatred of Jews and hatred of women are close relatives. (Anyone who wants to find out more about that should read Gender and Character by Otto Weininger.)[2] An old cultural heritage which continues to have an effect despite all of the successes of emancipation and the efforts of equal-opportunity officers.

The fact that the perpetually wandering Jew has settled in Israel and that so many countries and institutions are run by women has changed nothing in either of these resentments. Both haters of women and haters of Jews feel challenged, provoked by the objects of their fury. There is no anti-Semite who would not blame “the Jew” for what he must do to him. There is no rapist of a woman who would not hold the woman responsible for what has happened to her.

There are yet more parallels. The chair of the Central Council of Jews, Josef Schuster, recently asked rhetorically “whether it is sensible in problematic areas of the city — in quarters with a high percentage of Muslims — to identify oneself as a Jew by wearing the kippa; or whether it is better to wear some other head-covering.” Cologne Mayor Henriette Reker advised women in her city to keep an “arm’s length” from strangers and “be together in groups and not let themselves be separated, even in when in a party mood.”

Women and the Stockholm Syndrome

Making yourself invisible so as not to attract attention is no better as a safety precaution than hiding in a group. The woman-hater, like the Jew-hater, can always find a reason to unleash his inner s.o.b. If it isn’t the appearance — kippa and side curls here, miniskirt and and bare-belly top here — then it’s the impudent demeanor and ultimately, after the entire chain of arguments, it is that the Jew is a Jew and the woman is a woman. That’s enough.

Finally, there remains the question of why it is difficult for some women of the educated classes to understand this connection — why they see the aggressor as someone they need to offer therapy to.

Is it the expression of suppressed motherliness? Or an act of preventive submission? In other words, the behavior of slaves — female slaves, i.e., a female-specific variation on the Stockholm Syndrome?

“We are… an immigration society,” proclaimed a (female) left-alternative commentator in German Radio, after the long Cologne night. With and among us now, “immigrants with an archaic, sexist conception of women” would be living. “They must be made accountable and not pushed away. That, you know, is the only way for us to be free of the fear of the foreigner — to make him an acquaintance.” If necessary, this can be accomplished at midnight, on the square in front of the train station.

Now we have to do it — to integrate these people into our country, so that one day we will get more back from them than we have given them. And if everything goes well, that may include a new guitar for Amelie Fried.

22 thoughts on “Was What Happened in Cologne a Pogrom?”