Today is the final day of our week-long quarterly fundraiser. This has been a strange week, with weather ranging from b-r-r-r to warm rain and back again to freezing cold.

And there have been so many donations — thank you all very much! — that Dymphna and I have been scrambling. Just maintaining the record-keeping has taken nearly all of my time. It keeps pushing these fundraising posts later and later into the wee hours of each morning.

So I’m tired out, but it’s a good feeling knowing how many generous people are out there, each ready to hit the tip cup with a small amount for cause. Such is the essence of crowdfunding — a little bit from a lot of people, guaranteeing that Dymphna and I can continue this enterprise for another quarter.

The theme for this week’s fundraiser has been “The Age of Reason”, with daily topics drawn from the lyrics of the song “A Man for All Seasons” by Al Stewart. The full lyrics were posted on Monday, along with an embedded YouTube of the song.

This morning’s essay is inspired by these seven lines, the final lines of the song:

Well, you should try to accept what the fates are unfolding
While some say they’re sure where the blame should be falling
You look round for maybe a chance of forestalling
But too soon it’s over and done
And the man for all seasons
Is lost behind the sun

Too soon this week is over and done — or maybe not too soon, considering how worn out I am.

But Al Stewart’s line points to the life that’s too soon over and done. In the case of Thomas More, it’s a life cut too short by his own decision, the action that can’t be undone. For others, it’s a life cut short by tragedy or evil, as exemplified by Pim Fortuyn or Theo Van Gogh, both murdered for opposing Islam.

And there are numerous other more mundane ways in which one’s days may be cut short — disease, accident, being at the wrong end of a gun late at night in a bad part of town…

It can’t happen to me, though. I have already attained to a venerable age, so if I were to keel over and expire after typing this sentence, mine would not be an untimely death. Yes, it’s true that by doing so I would save Uncle Sam a whole lot of money in Social Security payments, but still…

The “too soon” aspect of it for me is that I cannot possibly live to see the dénouement of the great struggle between the Light and the Darkness. About ten years ago I realized that this is indeed the “Long War”, and will take at least two generations to resolve. I haven’t seen any reason to revise that estimate in the decade since then. I simply won’t be around to see how it all turns out. 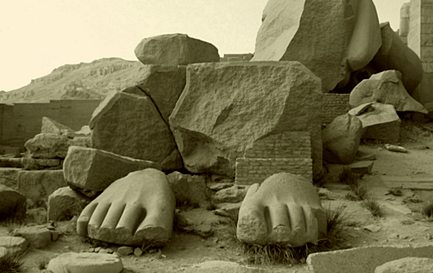 My faith in God tells me that the Light will prevail in the end, but there’s no telling how much suffering and death and evil the world will have to endure before it does. And there’s no guarantee that Western Civilization will even survive to see the triumph of the Light. We could go the way of Ozymandias*:

How long will it be until the sneer of cold command on the wrinkled lip of our current Commander in Chief lies forgotten in a desert waste?

How long until our Babylon is fallen, to rise no more?

Broken in the dust again…

Maybe the dénouement is something I don’t really want to live to see. Yes, I know that out of those ashes will rise something new and good. But those are the ashes of my civilization, my culture, my people.

Many people reading these words are considerably younger than I am. Those who are under 35 may well live to see the dénouement, whether it be grim or glorious. If you are among the fortunate who will live through the coming Troubles, you will get to see what lies on the other side of them.

Despite our demographic difficulties, millions upon millions of young Westerners are included in your age group. You and your cohort will be critical to the formation of whatever civilization is rebuilt upon the ruins of this one — or if there is in fact a civilization at all.

So when you rise from your chair after reading this, think about what you will do later today, and tomorrow, and next month, and next year. What you see around you can only last can only last a little while longer. And what will come after it?

Will it be something worth lending a hand to?

Or will it be a shattered visage lying in the boundless sands?

On that gloomy note, I leave you until next quarter’s fundraiser, which will be held in the spring, probably about the time the irises are blooming. A much pleasanter season — maybe I’ll be more cheerful then.

The time is gone, the song is over, thought I’d something more to say…

* From the poem of the same name by Percy Bysshe Shelley

19 thoughts on “Too Soon It’s Over and Done”