Ten years ago today I buried one of my best friends. His death hit me hard, probably because it was the first among my cohort of childhood friends. I’ve seen off a couple more since then, but the later bouts of grief have been easier to deal with — maybe I’m getting used to it.

Back in the early days of this blog, Saturday was often designated Poetry Day, and I’m reviving the tradition for this occasion. The essay below is a reminiscence about my friend and his funeral, followed by a poem I composed in my head on the drive back and then typed up when I got home. I was too shy in those days to blog on such topics, but I’ve mellowed in the decade since.

This is a departure from our usual fare. No jihad or “refugees” or Obama or Trump in this one. So, if you prefer those topics, you can skip this one — we’ll resume normal programming soon enough.

I first met Pete when we were both about eight years old. He had just moved into our neighborhood, and since we were age-mates — our birthdays were only five days apart — Pete and I became friends. He and his family were Catholics, like most people in that part of Maryland. They lived up to the Catholic stereotype, eventually having eleven kids, with Pete being the oldest. I was a Protestant, but his people weren’t Protestant-haters like some Catholics, and there were no Catholic-haters in our house. So Pete and I could safely establish a friendship.

When he was ten years old, Pete contracted a rare form of childhood lung cancer. He eventually recovered, but it was touch and go for a while. Two-thirds of his left lung had to be removed, along with pieces of three ribs. The area where the ribs were missing was adjacent to his heart, which made him vulnerable. We played sandlot baseball and football in our neighborhood, and we kids were told to be careful when tackling Pete, so as not to strike him in the soft spot. A particularly serious concern was the possibility that he might be hit there with a pitched ball (we played hardball), but fortunately that never happened.

Our friendship was interrupted by the four years my family spent in England. When I came back to Maryland, both of us had grown up. During my vacations from William and Mary, and after I graduated, Pete and I spent a lot of time together, with groups of friends or riding around in his car. Those times were what I remembered most in later years.

We were very different, Pete and I. I had been an inveterate intellectual since about the age of twelve, and could only do things that required brains but no skill. Pete was the opposite — he was good with his hands, and had the knack for taking things apart and fixing them. He eventually went to the local community college to study electronics, and later got a job working as a technician for the phone company.

In the early ’70s he bought an ancient Karmann Ghia for a few bucks, put a new engine in it himself, fixed up the body, and painted it lime green. That was the car he and I rode around in. You could pick it out coming a mile off, the color was so gaudy.

My friend Wally Ballou and I introduced Pete to the Grateful Dead. We paid for his ticket, and in return he drove us up to the show in Philly in that funky old Karmann Ghia. The car had a wiring problem that sometimes made its headlights go out, and Pete would have to whack the front of the car at a certain point to make them come back on. That happened while we were on our way up I-95 that night, so Pete pulled over onto the shoulder to smack some sense into the car. Wally and I just sat there looking at the tractor trailers go by in the falling sleet. More than thirty years later I remembered that night when I wrote the poem. And now it’s been more than forty years.

During our adolescence, while I was away in England, Pete had taken up shaving, driving, and smoking. That last habit was problematic, given his reduced lung capacity and his history of cancer. All his friends and relatives kept at him about quitting, but as far as I know he never did.

In the mid-’70s I got a big job in D.C. and moved back to Virginia. After that I didn’t see Pete much anymore — we drifted apart, as young people do. When I had an art show in D.C. in the early ’80s, he stopped by to see it. That was probably the last time I saw him until family night the day before the funeral, more twenty years later. But what did that still, waxy-looking face in the coffin have to do with Pete?

Cancer had struck him again when he was in his fifties, this time pancreatic cancer. I spoke to him on the phone once, and then later his brother told me that he was in remission. I was relieved. When I got the call a few months afterwards to tell me he was dead, it took me by surprise.

Dymphna and I drove up to Maryland for the funeral on February 27, 2006. At family night I went around the room greeting people, some of whom I knew from many years before, and others that I’d never met. One of the latter was named Theresa. When she introduced herself, I said, “Wait a minute — are you the Theresa?” It turned out that yes, she was.

As I stood there talking to her, it all came back. It was probably the summer when Pete and I were eighteen. He and Theresa were both lifeguards at a local swimming pool. She was a couple of years younger, and Pete had developed a crush on her. Big time. He would find a reason to drive through the neighborhood just in case she was on duty, so he could stop by the pool and talk to her. I was with him one of those times — he didn’t dissemble; he just said, “Let’s go by and see if Theresa is working.” But she wasn’t there — I didn’t meet her.

A relationship never really developed between them, and after that summer I didn’t think about her anymore. Then, more than thirty-five years later, I was talking to her for the first time, an attractive woman in her early fifties. At Pete’s funeral.

It turned out that they had remained friends over the years. She had grown up and married and had children, and they had stayed in touch. He obviously had a special place in her heart, as she had in his. I told her the stories about how Pete had been so sweet on her, just in case she never knew.

At the graveside the following day the weather was bitterly cold. It was overcast and windy with occasional snow showers — fitting atmospherics for a funeral. I had neglected to wear a heavy overcoat, probably because I didn’t have anything suitable for a formal occasion, so I wore a London Fog. I nearly froze to death standing at the edge of the crowd with the wind blowing through me.

Afterwards there was a wake at Pete’s brother’s house. Both brothers and all eight sisters were there. It had been at least thirty years since I had seen any of them, but they were all instantly recognizable — all those familiar faces from the schoolbus or Pete’s house. I could even recall some of their names, especially the older ones.

And there were other friends from the old neighborhood, now grown pudgy and white-haired or bald, but still familiar. We chatted about the old days, about baseball games, about old cars we used to have, about who got married and who got divorced. It was the first time I’d seen any of them since the early ’70s. And, in all probability, it was the last time I will ever see them.

The Pete I carried around in my heart, and still carry, was that best friend from the days of my youth. He was easygoing, affable, kind, and good-hearted, always ready with a grin. But those adjectives don’t do justice to him — they’re just words. That’s why I wrote the poem: to describe him allusively. To try to convey him as I understood him, looking back at a lost time more than thirty years before.

On the long drive home, while Dymphna was sleeping, I composed the following poem. I don’t generally explain my poetry, but a couple of technical notes are in order. This piece has no uniform meter, but the rhyme scheme is carefully structured: ABBA for the first two stanzas, then a “Middle 8” of two ABAB stanzas, and then another pair of ABBA stanzas to conclude it.

The floodlit fountain in the winter pond
Lighting the water from underneath
Lifts a plume of chill spray into the teeth
Of a sleety wind across the trees to the road beyond.

The same road, the same sleet, and the same night
Unroll before the wheels of your decrepit car.
The radio is on. You’re content where you are,
With a hand on the wheel, at the edge of my sight.

The lighter flicks to a cupped cigarette under
Your face, and the smoke blows out the window vent.
You turn and grin. It makes me wonder
How you could be gone, and where the years went.

The words will come, but words are no good.
You were patient and loyal and good and true.
The heart must go where no words could:
On this side of the veil is no likeness of you.

The ground has been closed now, and there you lie,
Breathing the sod from underneath,
While above you grass blades bend in the teeth
Of a chill wind, with a few flakes flickering by.

The ground has been closed; the world waits for the sun.
Some have tomorrows. Some must wake
And roll away the stone. It is for their sake
The verses continue, the song not quite done. 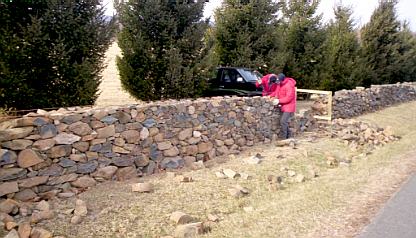 That night, after we got home, Dymphna blogged about that trip, with a special focus on the Mexican workers who were building a stone wall along the road frontage of an estate in horse country. I’ve been by that spot a few times in the years since, and the wall was never finished. They completed another fifty yards or so, and then just left it, with a pile of stones at the end waiting for the workers to return and resume their labors.

Yet they never did. I don’t know if the Horse Baron who owned the estate ran out of money, or lost interest, or died, or something else. But the wall remains incomplete.

There’s probably a poem in that, too, but I haven’t figured it out.

15 thoughts on “The World Waits for the Sun”