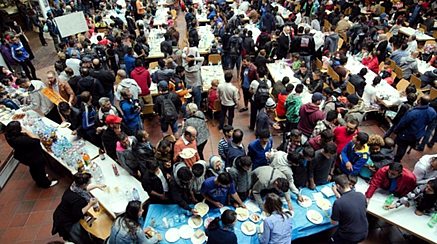 The “refugee” situation in Germany has become so dire that even the rank-and-file of the Socialist Party felt compelled to take to the streets to protest current migration policy. So that made political leaders sit up and take notice, right?

The word went out through the party hierarchy ordering the cessation of such demonstrations. Local activists, being good little socialist apparatchiks, dutifully complied and retired from the streets.

Many thanks to LH for translating the following article by Hans Heckel from the Preußische Allgemeine Zeitung:

Why the socialists of Essen are not allowed to demonstrate; people who wish for their own death; and how the left sometimes has to contort itself.

Well, that went well. Three local SPD [socialist party] groups in Essen wanted to hit the streets to demonstrate against the overtasking of their portions of the city by the flood of asylum seekers. On Friday of last week, with the motto, “Enough is Enough, There is a Limit to Integration, The North (of Essen) is Full”, the SPD organizations in three former workers’ districts even called for sit-ins.

Panic broke out among the party leaders. North Rhine-Westphalia Governor Hannelore Kraft (SPD) even sent the general secretary of the state SPDE, André Stinka, to Essen, to chew the comrades out.

But he didn’t have to do that. The Essen pinkos called off their action on Saturday. Why? Because they had been taking fire from all (leftist) sides. Worse yet — “rightists” had jumped on the bandwagon. Weird! People really join the established parties to be able to participate in the political life more than an ordinary citizens. While the ordinary, unaffiliated voter only gets to the polls every few years, a party member is constantly present at the political decision-making process. That is the promise of recruiters for the [CDU/CSU] Union, SPD and Company. Here is where you would have more influence on events, where you get a hearing, where you can effectively advance your concerns.

Now it’s obvious — same old story. It’s just the opposite. That is, in Essen, membership in an established party is revealed as no more than an instrument by which the powerful can better discipline their politically interested and committed citizens. So the demonstration scene in present-day Essen is a really unusual phenomenon. There are those — including the violent, extreme leftists of the “Antifa” — who are fattened on tax money through numerous channels and in return are happy to enforce the power of the state with fist and club. Their targets are mostly AfD demonstrators. abortion opponents, PEGIDA followers, and the like. Then there are demonstrations out of the hooligan milieu or the “bouncer scene,” which are washed away by police water cannons at the slightest provocation, and so do not last long.

And finally, there are the government-conducted “Our City Will Stay Diverse” demonstrations. Their core is made up of deputized school classes, party and union youth groups as well as dependents of the state, churches and unions, whose employers have “recommended” that they participate.

That’s that. And where are all the other citizens? Well, It has been possible to ban the adherents of the larger parties from the streets by use of the incessant, pounding “Fight against the Right” drumroll of the powerful and their media. That is really not primarily to put pressure on the NPD [Nationaldemokratische Partei Deutschlands, the neo-Nazis]. but rather to keep the normal citizens on track, which has been done masterfully in Essen.

Since the fact-catching net has sprung a leak, we are now haunted weekly by new reports of crimes in and around asylum camps, as well as sexual attacks by so-called fugitives. In Munich, an 18-year-old girl was sexually abused by a “hamet”[2] after she had met the presumably ethnically Turkish or Iraqi man in a club.

Perhaps the “Antifa” would say: Well, the girl was lucky. Current on Facebook is the picture of a young woman holding a sign that says “Will trade racists for rapists.”[3] Underneath is the Antifa logo and the signature, “Red Antifa Front — RAF.”

We may hope that the picture is a tasteless forgery. It seems, at any rate, to have been “edited.” If it were genuine, that would mean that the 18-year-old Munich girl could have had a much worse experience. Instead of being sexually abused by a “hamet,” an (apparently) nice young man could have bought her a glass of champagne, and then stood up for border controls, thus revealing himself, beyond a shadow of a doubt, according to the Antifa guidelines, as a “racist”!

However you look at it, the Facebook thing smells of provocation. We have seen so much lately that is unbelievable, that we can consider anything to be possible. People who shout “Bomber Harris, do it again”[4] or “Snuff it, Germany!” are a part of the street scene. They are ultimately calling for their own deaths. Germany is only Germany because the Germans live here. Whoever wants to bring on its death is not calling for the death of fields and forests, but of German people, and in the case of a German, for his or her own death.

How far outside the limits of ordinary common sense these people have moved is clarified by a glance at nature. From the lowly slime fungus to the highly evolved mammal, every organism is wired to secure its own existence and that of its kind. Patriotism is merely a continuation of this natural impulse, applied to human beings. Meanwhile, we have learned that this impulse must be held in check, so that it does not devolve into ethnic hatred, as good wine may turn into vinegar. A German who shouts the battle-cry, “Snuff it, Germany,” has everything upside down. The most basic feelings are inverted. Ultimately even Being-Raped may seem to be a welcome alternative to the mere Being-Present of wrong-minded peasants.

The brawlers of the Antifa are not the only ones who can stand on their heads. You all heard Justice Minister Heiko Maas promise to take decisive action “after Cologne.” And what did he have in mind? As a reaction to the New Year’s Eve excesses, he intends to massively expand the “Fight against Rightism.” New positions are to be created in the Antifa industry and several additional millions will flow.

Whereas — No, we may be doing the minister an injustice by putting him in the same group as the perverse crybabies. Basically, Maas’s actions were well-considered. “Cologne” has torn the cover-up garment off the body politic. Those who are prepared to turn on the lights must now be shooed away even more forcefully. So that no one can see how terribly Maas and his people have failed. For, as usual, the “Fight against Rightism” Maas has in mind is not directed primarily against genuine neo-Nazis, but against mutinous citizens of all stripes — cf. Essen. Obtusely, reality pays no attention when politicians contort themselves massively to push it away. It comes through again and again. Several emphatically leftist music clubs are just now having a tough time. Asylum-seekers there are apparently going after women en masse, to the point of violently invading booths in the ladies room. In a not-intended-for-public-consumption e-mail, one of the clubs pondered completely refusing admission to asylum-seekers.

The e-mail stupidly landed in an office of the AfD, which instantly passed the text on to the press. Now anxiety reigns. The author of the e-mail assures that it is not about exclusion, but about the “dialogue with the refugees.” The (internal) message was a “cry for help.” A cry to whom? No matter. It is hard when the advocates of multiculti and open borders unexpectedly come upon the unspoiled fruits of their own efforts.