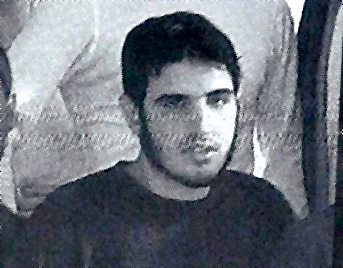 The young man in the grainy photo above is named Basil Hassan. Three years ago Mr. Hassan allegedly dressed up in a fake postman’s uniform and attempted to assassinate the Danish Islam-critic Lars Hedegaard at the latter’s apartment building.

After the attempted murder, the alleged perp fled Denmark, and has reportedly been spending his time in Syria and Turkey. The Danish police would like to find Basil Hassan so that he can help them with their enquiries.

I can use Mr. Hassan’s name publicly because I live in the United States. If I lived in Denmark, I would be forbidden to mention it, however. Presumably I would be violating his human rights or something. But that doesn’t make sense — wouldn’t it aid the criminal investigation if ordinary Danish citizens knew the suspect’s name, and could call the police if they happened to encounter him?

But that’s too logical — that’s not how they do things in Europe.

Lars Hedegaard defied the law and published the name of Basil Hassan, and was subsequently prosecuted for it. Today was his day in court. Several of his supporters (including Tania, the leader of PEGIDA DK) wore T-shirts with the forbidden name printed on them when they came to court. They were ordered to remove the shirts or be thrown out. So they complied, and took off the shirts.

Later, when they went outside, three of them held up the shirts for a friend to take a photo. The police immediately arrested them, and charged them under the same law Lars Hedegaard was accused of violating.

Such is fate of infidels in Modern Multicultural Denmark.

Below is an interview with Tania about what happened today. Many thanks to Vlad Tepes for editing and uploading this video:

Vlad and I batted around some ideas about how Danish “Islamophobes” could have some fun while testing the limits of legal absurdity in Denmark. I suggested that they make two sets of shirts, one batch with “Basil” printed on each shirt, and the other with “Hassan”. People could put on the shirts and mill around for a while, before finally casually grouping themselves in appropriate pairs. Could they be arrested at that point?

Or: Each shirt could have just one letter on it. Those who wore them could mingle in random sequences until the moment arrived to arrange themselves in a certain order. Could they be arrested at that point?

Vlad suggested that to add to the fun, they could make anagrams with the letters until they were ready to arrange themselves to spell the forbidden name. A quick look gave me “banish a lass”, plus a couple of naughty ones. But nothing really catchy.

There’s more about this absurd and dismaying case at TheRebel.media.

17 thoughts on “The Forbidden Name Which None May Utter”