Our Danish correspondent Kepiblanc just sent this update on the latest Islamic invention contrived by culture-enrichers in Denmark.

The Gravitational Jihad
by Kepiblanc

For years Danish motorists have faced impending danger whenever they approached one of those highway ‘groutings’ — narrow bridges leading local traffic over major routes. Especially around culturally enriched neighbourhoods.

The wise driver will slow down and carefully observe whether there are any Muslims on the bridge before passing under. Otherwise, the chances are that he or she will be pelted with various objects such as pellets, rocks, bottles and whatnot. So far no lethal damage has been done, mostly due to the fact that modern cars are constructed to be somewhat Islamophobic — such as with unbreakable windscreens and safety belts. 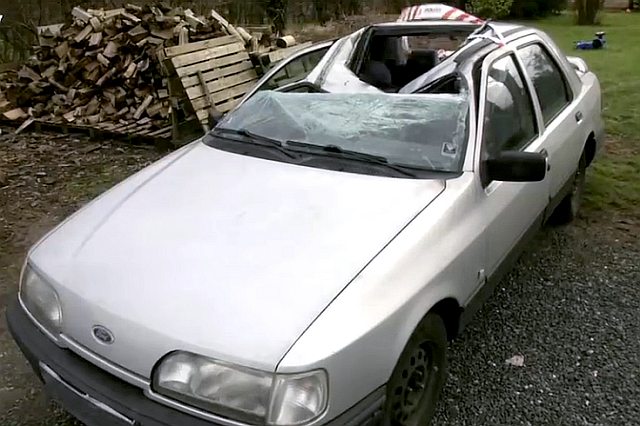 Nevertheless, our diligent Muslims have carried on practising and improving their skills. And now they’ve figured out that speed alone isn’t sufficient to inflict lethal damage and carnage. Mass is another — and important — factor. Someone must have told them that mass times speed squared yields better performance. They can’t command speed, so consequently they’ve added mass — in the form of 30 kilograms [66 lbs.] of heavy, concrete sidewalk pavers. Last week they dropped one onto a tiny Ford, but — alas — without killing the entire family of four, causing only severe lacerations to the female in the shotgun seat.

The culprit here was their knowledge of falling objects. Being Muslims, they’ve inherited the law of Aristotle, which asserts that heavier objects fall faster than lighter ones. So they figured that a 30 kg concrete brick would fall faster than a pebble, and accordingly hit the windshield. It did not. It hit the roof of the car, dammit! Small comfort, though: the four cars following hit the broken pieces, ran off the lane and crashed.

So now they’re back to the drawing board, scratching heads. But — as always — help is at hand: our left-wing politicians immediately proposed that the entry requirements to college should be lowered in order to accommodate Muslims. That way they might have a chance — provided they’re present — to learn about Galileo and his law of falling objects. Which states that speed = ½ × gravity × time².

Well, I’m sure no Muslims read Gates of Vienna, but if they do, I’m quite confident they can’t do the calculus anyway. So maybe they’d better resort to ye good olde and proven RPG instead…

41 thoughts on “The Bridge Jihad in Denmark”