Our English correspondent Seneca III was at last Saturday’s PEGIDA UK demo in Birmingham. Below are his observations about the state of policing in Modern Multicultural England as exemplified by the behavior of Britain’s Finest at the demo. 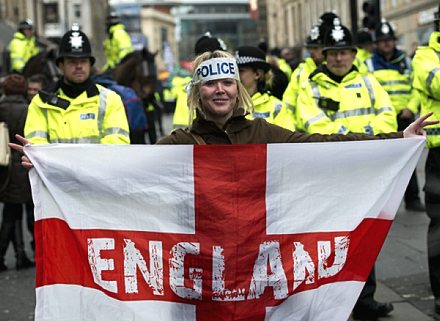 Commenting the other day on Vlad Tepes concerning the arrest of General Piquemal in Calais, in part I said that most of the European Police Forces have been suborned in a similar fashion. This was no off-the-cuff comment, for I have just witnessed the outright demonstration of quasi-military force the West Midlands Police mustered without any abiding need in order to repress a quiet, sober, law abiding, peaceful protest in Birmingham on Saturday. Just three hundred or so of us in all, many middle aged and middle class, a significant proportion of whom needed walking sticks or the help of younger kin in order to make it through the afternoon and the appalling weather.

First, upon exiting the platform onto the main concourse of Birmingham International Station, I found myself facing a line of Police Officers in standard uniform and wearing their normal helmets, not the medieval variety either worn or carried by their fellow officers beyond. I was politely stopped and asked “Where are you going?” This I might add despite the fact that I am obviously quite elderly and was neatly if casually dressed and not carrying anything other than my obviously necessary walking stick. I replied politely and quietly “Do I have to answer that question?” and the Constable replied “No.” I in turn politely replied “Thank you. Then I shall continue on my way.” And did so, unmolested but appalled that such a demand could be inflicted on me without reason or justification.

Outside, the Constabulary were there in huge numbers — but there they were in body armour and helmets, clubs in belts, war dogs trained to savagely bark and bark almost to the point where these poor creatures were straining their vocal chords. Threat and intimidation by sound and then vision was the first order of their day. 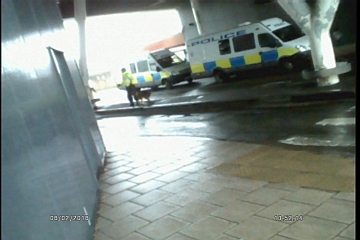 There also were police cars and vans in uncountable numbers, a helicopter on permanent hover, loudhailers telling us as to what we should do or not do, where we must go as free men and women in our own land, shuffled off to a distant, deserted Industrial Estate along a route lined with these instruments of the New World Order whilst the ANTIFA were permitted to foam at the mouth in the full light of day in the centre of what was once the great second city of this land but is now little more than a slummy Islamabad West. 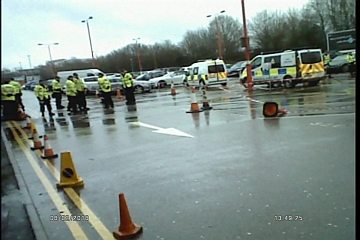 And thus I came that day to wonder “Do these uniformed, hyperventilated, self-serving State drones actually think that come the day they are going to survive the wrath of the native common man?”

Well, I know not, but perhaps they do think they will; these days they are not recruited or promoted according to their ability to rationalise and analyse and nor for their intellect or cultural patriotism, only according to their indoctrinated willingness to subordinate their thinking processes to the cause of our ethnic cleansing and their moral compasses to the needs of their daily sustenance, future pensions and the common purpose of their obsequious senior officers as they in turn do to the venal, treacherous political scum that pollute our establishment at all levels of governance.

Well, that is the way it is, but I continue to suspect that come the day there will be little mercy for such as these, and no doubt this will come as something of a surprise to all of them. If so, so be it.

— Seneca III, in a dismal Middle England on this 7th day of February in the year of our Lord 2016.