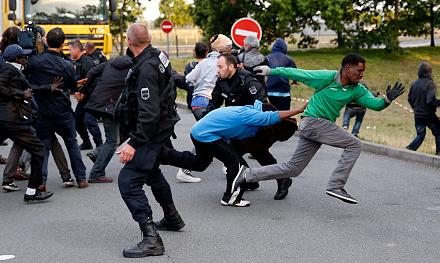 On of the consistent features of the “refugee” crisis in Europe is that the new arrivals get a better deal than the natives. Whether it is housing, health care, public transport, or education — you name it, the migrants get it for a reduced rate, or for free, while natives have to pay. They have to pay twice, actually — once for themselves, and once for the “refugees” they subsidize.

The Hessenpark is a state-run open air museum in Neu-Anspach in the German state of Hesse. Native Germans have to pay the entry fee, but the “New Germans” don’t. This is not only unjust, it’s absurd — I mean, how many Somalis and Afghans really want to visit a German museum, except maybe to loot it or molest the female employees? Is this simply another example of an initiative that makes the Gutmenschen feel good about themselves?

Many thanks to Nash Montana for translating this article from Netzplanet:

Free admission for “refugees”, everyone else pays — even dogs.

A lively debate is taking place right now about the pricing politics of the open air museum Hessenpark. Hartz IV recipients (unemployment benefits), people with handicaps, yes even dogs have to pay admission, along with everybody else, except of course “asylum seekers” and “refugees” and their companions who get completely free admission. And that is exactly what drives citizens up the wall; they feel that this type of preferential treatment is nothing but discrimination and they feel as though they are second class citizens. And now the open air museum complains on their Facebook homepage about the incredible amount of hate mail and ugly comments made in regards to their pricing policies [pdf].

But this has nothing to do with hate. People are rightfully complaining about an injustice, The guests receive free wifi, clothing, housing (including washing machine and dryer), heating, food, cleaning, bus and train tickets, recreational activities and much more, add to that welfare benefits and extra pocket money of €143. And from this pocket money a “guest” could easily spend €2.50 for an admission to the museum.

Of course all train-station-clappers and refugee fetishists immediately conglomerate and babble out their usual moralistic drivel in commentaries: Super campaign for “refugees”, great for the integration and a chance for a peaceful get-together; briefly put, all the usual general empty phrases of the Gutmenschen.

We will see how the Hessenpark acts in the near future when paying clientele cease to visit because they are unable to come up with the admission fee. Either everybody pays or everybody gets free admission.

6 thoughts on ““Refugees” Get Free Admission to the Hessenpark Museum”