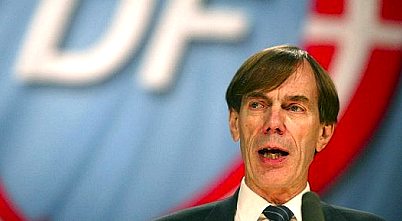 All across Western Europe there is an increasing trend towards prosecuting people for speaking out against mass immigration or Islam. Ten years ago such prosecutions were very rare, but today they are a routine occurrence, to the point where it is no longer possible to keep a comprehensive list of dissidents who have been hauled into court.

It used to be that Denmark was different. It was a bastion of free speech back in the days when “hate speech” was being juridically punished in Britain, Sweden, France, the Netherlands, and other PC bastions in Western Europe. But nowadays you can get tried and convicted even in Denmark if you say negative things about immigrants or Islam.

Mogens Camre is a Danish politician, one of the founders of Dansk Folkeparti (Danish People’s Party). In his role as an elder statesman for the party, he came into his own in recent years as the European migration crisis caused public opinion in Denmark to swing towards DF and support policies that restrict immigration, crack down on migrant crime, and limit the social benefits handed out to recent immigrants.

Today Mr. Camre’s conviction for making a “racist” tweet was upheld by the Eastern High Court (landsret) in Denmark. Below are excerpts from an article in The Local describing his crime:

The Eastern High Court found Mogens Camre, a 79-year-old former MP and MEP for the Danish People’s Party and current member of the Gladsaxe city council, guilty of racism on Tuesday and slapped him with an 8,000 kroner fine.

The court thus upheld a previous ruling by the Glostrup City Court.

The two convictions stem from a tweet Camre wrote in July 2014 that compared Muslims to Adolf Hitler.

“Regarding the Jews’ situation in Europe: The Muslims are continuing where Hitler left off. Only the same treatment Hitler received will change the situation,” he wrote in the now-deleted tweet.

Danish People’s Party leadership said that Camre’s racism conviction would not affect his standing in the party.

“The German soldiers in our streets behaved better than the Muslim boys — much better, they were well disciplined,” he said in a clip that can be viewed here.

In 2003, Camre was charged with racism for saying that all Western countries have been infiltrated by Muslims planning to take over, and in 2005 he was reported to police for blaming Denmark’s low birth rate on the “immigrant burden” and for saying that “immigrants in Denmark as a whole do not contribute anything at all to society.”

Mogens Camre is being made an example of precisely because of the huge popularity of the Dansk Folkeparti’s policies, which are fragmenting the Left in the Danish parliament. Some socialist MPs are actually feeling forced to vote for DPP initiatives because of their huge public appeal.

At 79 years of age, Mr. Camre has been there from the very beginning, and now that the party he and others created is finally wielding power — having been proven right after all these years — this judicial assassination is how Denmark’s “Legacy Left” is petulantly getting its revenge.

Below are both the English and original Danish versions of the speech given by Mogens Camre in the High Court in Copenhagen last Friday. First, the English:

Speech by Mogens Camre MB, in the case against him tried at the High Court in Copenhagen, on 29 January 2016.

Honourable Officers of the High Court.

I have asked to make a closing statement summarizing my views in this case.

If free speech is to be limited only to formalized academic remarks, in language alien to the general public, which thereby obfuscates important problems certain interests in our society obviously wish to keep hidden, then it is simply impossible to work as a politician. I wish to underline this fact.

Nevertheless, I have contributed to a balanced academic debate. Both alone and in tandem with well-known intellectuals, I have written five books concerning the now widespread problems which have hit Denmark and Europe, due to the advance into our continent of a barbaric culture. Nobody has been able to point to errors, or statements open to refutation, in any of these books. Nor has any legal challenge ever been issued against the content of these books, which present my message in more detail. Neither has anyone ever been charged for their publication.

The High Court is now forced to judge whether a distillation of this body of work, reduced by the prosecutor to a single tweet, bound by the 140 characters limiting this medium – which therefore compels the use of figurative language – can credibly be interpreted in such a way that it constitutes a breach of the law.

Directly attached to the aforementioned tweet, were four subsequent tweets in which my opinions were immediately explained further. I do not think it possible to separate out, part of the entirety of my message, contained within the sum of these five tweets: thus criminalizing one tweet only by deliberately ignoring the meaning conveyed by all five.

There is nothing in my tweets, however, that can be interpreted as a threat against anyone, concrete or otherwise. Neither is there any sentiment contained within them that has not been expressed by other politicians, either verbally or in writing. When a political party prints election posters which contain the phrase, “Nazi Islamism,” this is an analogous simplification. It is self-evidently not a statement by The Conservatives that all Islamists are Nazis.

The most widespread persecution of Jews in Germany took place under the Nazi regime. It is therefore only natural that the ambassador of Israel, in Berlin, would make a comparison between the situation facing Jews in Germany in the summer of 2014, with the torments endured by Jews in 1938. It is similarly only natural, that I, in a political debate, be allowed to comment on what is again being allowed to happen to the Jews in a number of European countries.

When the imam of the Grimhøj mosque in Aarhus can declare, “Allah, kill the Zionist Jews. It is an easy task for you. Count them and kill every single one,” without fear of prosecution or punishment, as reported by tv2 news on 22 July 2014, then it must surely be within the acceptable bounds of free speech, for a politician to draw the obvious comparison that exists between the words of Abu Bilal, and the persecutions suffered by Jews under Nazism – in the condensed format of a tweet, and to a limited group of followers.

In his views Imam Bilal scarcely travels alone within his community. You will know this.

Every society will face problems when a religion, or an ideology, has the unchallenged freedom to refer to writings as holy, that contain unambiguous demands that Jews be murdered. These tenets have been translated into brutal reality several times in France, Belgium and Denmark, and throughout the Middle East.

“The texts of Islam clearly distinguish themselves from the texts of other religions, by entreating violence and aggression against other believers, to a much higher degree. There are also direct calls for terror. For a long time this has been a taboo within research on Islam, but it is nevertheless a fact that must be recognized.”

If we as politicians are to be denied the right – through pithy, clear language accessible to ordinary people – to reject articles of faith and behaviour that in our culture are considered irrational, immoral and frankly inhumane, without incurring the risk of persecution through the courts, then clearly free speech has already been limited only to what Islam will allow. And with this, our democracy dies, which is precisely what this alien culture desires.

42 thoughts on “Mogens Camre: Convicted of “Racism” for a “Hate”-Tweet”