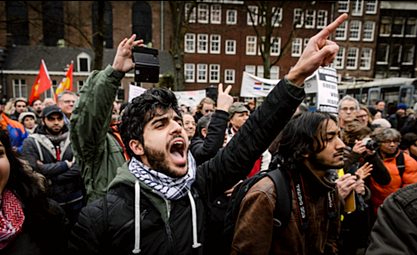 On Saturday 6 February Pegida demonstrated in Amsterdam. At least, that’s what they wanted. They applied and got the required permission. The mayor of Amsterdam (socialist, labor party) wasn’t let this happen unchallenged, however. He granted permission for a counter-demonstration to left-wing organizations. That’s nothing unusual. Happens all the time. What makes this newsworthy is that he gave them permission to demonstrate at the same time, next to it. And that ladies and gentlemen, makes it a trap.

The idea was, of course, to tar Pegida blacker than hell and accuse them of whatever you want. Fill in your favorite World War 2 villains. Only it didn’t work out that way.

The Pegida demo started with a bomb threat. What a surprise… who on earth would do something like that? Police ordered them away from their designated spot onto a bridge for safety. Both sides of the bridge were surrounded by AFA activists who came out of their designated areas to besiege the now surrounded Pegida demonstrators.

The media were all present, and tried to make it look as if the neo-Nazis (that’s how Pegida is reported about in the Dutch media) were the culprits. But as I said: it didn’t work out that way. Lots of people were there, and they posted their observations on Facebook, Twitter and the media sites. That would have forced the Dutch media to admit this was a trap intentionally set by the mayor who ordered his red hordes into action. And then they wouldn’t have been able tar Pegida at will anymore. So they basically have to ignore the whole demonstration.

Tactically, Pegida was soundly defeated. Their demonstration never got started, and they were bullied away by red (AFA) and blue (police) activists. Strategically, the story is very different. It is crystal clear that the violence was controlled by the mayor himself. Days before the demonstrations just about everyone said: ‘two groups violently opposing each other demonstrating on the same day at the same time next to each other? That’s not a good idea.’

The media could not, as they intended, tar Pegida as neo-Nazi. If they were unbiased, they would have published widely about left-wing violence. Which they didn’t. It’s not in the news today. The Telegraaf reported in a minor follow-up on Sunday that the twenty activists arrested have been released. That’s all.

I googled on the Telegraaf: Three items on ‘Pegida demonstratie Amsterdam’. One reports that the police were ready for anything. another that twenty demonstrators were arrested (in which they subtly implied those were Pegida demonstrators), and a third that those chappies were released on Sunday.

The left-wing Volkskrant reported likewise (full article behind pay wall). A few articles about the demonstration, just as the Telegraaf reported, and a more lengthy article about left-wing frustrations that they no longer control the streets anymore.

The other media outlets published similar reports. A few articles that Pegida demonstrated, some violence occurred, a few arrests were made and those arrested have been released. Technically, Pegida didn’t demonstrate at all. It never got that far. Yes, there was violence, and lots of it. Only Pegida was not involved in it. All violence came from AFA. What they didn’t report — as it is no longer a newsworthy issue — is that no violence had been necessary at all. Had the mayor done his job properly.

The reason why it hasn’t slipped out of the news is that bloggers such as here at the Gates and EJ Bron, plus lots of others on websites and social media, keep posting what actually happened.

Once again the politically correct opinion painted itself into a corner. They won the battle, but are losing the war.

H .Numan has also translated the following letter from a Frisian politician to the mayor, published by Joost Niemoller:

Today I was present at the Pegida demonstration. I had a meeting with the organizers beforehand, during which the rules were carefully explained. Everybody covered buttons with swastikas [translator’s note: these buttons were depicting AFA, and were not in any way supportive of Nazism!] or threw them in the bin, as you demanded. Pegida is a peaceful democratic movement, and we were told that it definitely wants to remain that way. A friend of mine from Friesland volunteered with many others to support the police by wearing an orange shirt.

According to the media, the pro-refugee/AntiFa demonstration would start around noon, and the Pegida demonstration at 3pm. On the way to the demonstration site the organizer was confronted with new demands plus a false bomb threat. When we arrived well before 3pm a lot of opposition was already present. As well as a lot of police — for which we are grateful, given what happened afterwards!

From all directions hordes of raging and screaming AntiFa attacked us and repeatedly try to break the police cordon surrounding us. Many participants could not reach us. There was no opportunity for the speakers (who traveled from Germany and Belgium specifically for this demonstration) to address the demonstration. All we could do was laugh about AntiFa: Ha, Ha AntiFa! We could not even walk, let alone march. Because the streets were blocked with a raging and screaming violent crowd. You hadn’t taken any measures whatsoever to prevent this from happening.

The police threw them back a little ways with charges. We couldn’t even move. Later coaches were required to save us from our plight. We couldn’t be driven to Amsterdam Central Station, as this station was surrounded by a violent AntiFa crowd. Instead we were driven to smaller stations in the outskirts of Amsterdam.

Many participants will file criminal charges against you. So will I. You allowed a violent horde to approach us, and you did not take any measures to prevent it. AntiFa is well known for its violence and aggressiveness. You had at your disposal mounted police and squads of riot police. Why didn’t they act on the illegal counter demonstration? First you allowed them to be present, and later on you allowed them to become even more violent by not acting as you should have. We had to be evacuated under heavy police protection.

It is my right as a Dutchman to demonstrate and to participate in demonstrations. AntiFa has NO right at all to repeatedly attack and hinder peaceful demonstrations by starting violent riots. Pegida will come back to Amsterdam, and I trust you will ensure this AntiFa rabble with meet with the police even if they start moving in our direction. That will save a lot of public money spent on the police as well. For this was totally unnecessary. Only AntiFa (a covert Muslim front) is known to be violent. Pegida is not.