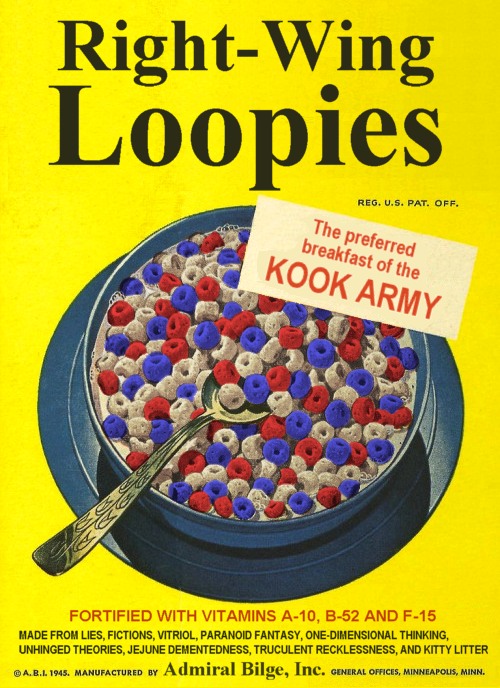 The image here was carefully crafted by the Baron at my request, as a gift for Diana West.

Where I got the idea for this parody is lost now in the synapses of my forgetfulness, but I think of Diana often: the way she stood up to the attempts to shut her up and (failing that) to demonize her (see the link for the collection of epithets aimed at her that became the list of ingredients for Right-Wing Loopies) and drive her from the public square. Those stalwart soi-disant “conservatives” violated every principle of conservatism as they descended into ugly character assassination… and so many outright lies that their treachery required a second book just to plumb their cesspit of dishonesty.

Wait. I remember now what created the germ of this idea: The National Review recently devoted an entire issue to the problem of Donald Trump. Obviously for the Beltway Bunch, Mr. Trump is a worry. And they are attacking him in much the same way these stalwarts attacked Diana West. You can almost smell the brimstone again.

The fact that she had come out in favor of Trump prior to their campaign against Trump brought back the memories of that attack on Diana West. A similarly sulphurous smell was emanating from the Right. Again…

That’s what made me remember… reading various polemics from the Right about the danger America faces from the threat of Donald Trump’s popularity brought it all back, including the insults. Trump’s appeal to a variety of unwashed populists, Tea Party paranoids, and the hordes of generally disaffected and/or unemployed folk who dwell in Flyover Country is making the Beltway Bunch nervous. Very nervous.

They’d much have preferred that The Disaffected simply sat out this round of voting — as many of them did in 2012. And since they know the potential power of this part of the electorate — see Eric Cantor’s unprecedented and ignominious loss to an economics professor — they’re worried.

As well they should be. The Tea Party did that. The Hon. Mr. Cantor thought he could ignore his constituents’ point of view regarding immigration. And he could do just that, actually. He just didn’t realize his differences of opinion with the people who voted him into the House could be the cause of their decision to vote him out. Hubris, Mr. Cantor, hubris.

No one knows a lot about Donald Trump’s opinions on any number of subjects. But they do know one big thing: he wants a Wall on our southwestern border. It’s the same wall they want. And it’s the same wall none of the other contenders appear to deem important. So on this one big elephant in the room Mr. Trump has trumped his opponents: Give us a Wall, Y’all.

For our stubborn intransigence we wall-ers are Right-Wing Loopies. And Diana West has made her opinion on Mr. Trump and the Wall quite clear: she publicly endorsed him as our best hope in fighting the tyrannical flood of immigration. So she’s a Right-Wing Loopy, too.

This issue may well destroy the Republican Party. But if it does that’s only because the chasm between those in charge and those who vote becomes more unbridgeable with each new bellow from the Beltway.

Be sure to eat your cereal, boys and girls; you’ll need your strength. It’s going to be a long and dirty road between here and the voting booth.

28 thoughts on “Breakfast of Champions”