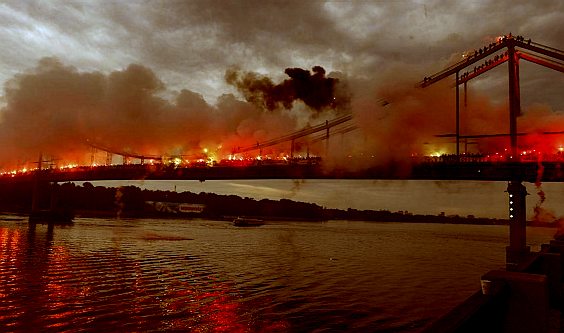 Here we are at Friday of fundraising week, and the donations continue to flow in at an amazing rate. Lots of modest gifts — that’s what makes crowdfunding work. “Many a mickle makes a muckle,” as they say in Yorkshire.

We’ve acquired quite a few new readers in the last two months or so, due the various crises generated by Islam, including the massacres in Paris and the Groping Jihad on New Year’s Eve in numerous European cities. In addition, Matthew Bracken has been contributing articles and stories here since November, and that has brought in a fair number of new American readers.

So, for recent arrivals, here’s the drill: this site is kept in operation entirely by individual contributions from readers. No ads, no corporate money or foundation grants. Just modest amounts sent in by ordinary people during a weeklong bleg every quarter. So, if you think that what we’re doing here is important and you want to see it continue, please visit the tip cup on the sidebar of the main page and drop in a mickle or two.

The theme of this week’s fundraiser is “The Age of Reason”, with each day’s topic inspired by the lyrics of the Al Stewart song “A Man for All Seasons”. The full lyrics were posted on Monday accompanied by an embedded YouTube of the song.

An “action that can’t be undone” is what is suggested by the common phrase “burning one’s bridges”.

All of us face such moments at one time or another in our lives, Irrevocable decisions don’t always have negative connotations — the decision to have a child, for example. Or to give away a significant chunk of one’s fortune to a righteous cause.

But most actions that can’t be undone have ominous overtones or involve misfortune. Some of the more trivial examples would include those horrible words blurted out in a moment of anger or spite to a spouse, or a family member, or a friend. The kind of thing that can’t be taken back, that you regret for the rest of your life, and look back upon with shame. What James Thurber called a “pillow-biter”. 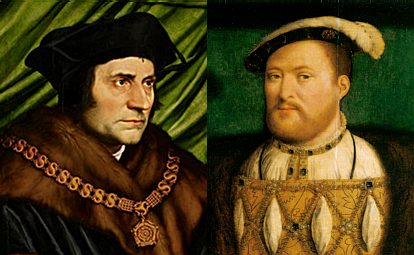 But the actions referred to by Al Stewart are momentous ones. They describe decisions of grave import. Regardless of what you think of Sir Thomas More — and a number of readers have pointed out his character flaws in the comments since we first started discussing him on Monday — his decision to defy his sovereign showed that he had core principles that he refused to violate, even though it meant his death. He could have chosen the safe way out and compromised his principles. He could have decided to die of old age.

Most of us don’t have to face such momentous decisions during our lifetimes. But occasionally we may be forced to make a choice based on principle, knowing that what we choose will send us down a path from which there can be no return.

In my own lifetime up until now, the most significant action I have taken that can’t be undone was my decision to go public as a Counterjihad writer and activist.

Before 2010 I had remained safe in my pseudonymity as Baron Bodissey. Then came the opportunity to write for Big Peace when it first started up. One of the requirements for doing so was that I must write under my real name. Dymphna and I discussed it at length, and decided that in the end it was worth it. So I took a deep breath, sent my little bio in to Breitbart, and “came out”.

Such a decision is significant for several reasons. One of them concerns personal safety. At our level — little snails in the thick undergrowth of the Counterjihad rainforest — that’s not so significant. Yes, I do have to be alert, maintain situational awareness, and take certain precautions. But I’d been doing that anyway ever since October of 2005, when I went down to look at the Jamaat ul-Fuqra compound in Red House and scared the bejeezus out of myself.

At higher levels, safety concerns become more significant. Someone at, say, Robert Spencer’s level has to live with being a target at all times. And at the level of Tommy Robinson and Geert Wilders, the constant threat of death changes one’s life forever. At that level of prominence a normal life is no longer possible.

If Mr. Wilders had known what lay ahead the first time he spoke out against Islam, would he have done it anyway? Or would he have kept his mouth shut?

But there are other considerations besides safety. When you go public in this line of work, you basically foreclose the possibility of getting a job. It’s not just government jobs and security clearances that are at issue: potential employers routinely google an applicant’s name to see what comes up. If they discover that the résumé on the desk in front of them is that of — gasp! — an Islamophobe, most of them will decide not to hire. Even if they don’t have any personal distaste for such opinions, they’ve probably noticed what tends to happen to workplaces where well-known Islam-critics are employed. Why risk that?

That’s what happened to Fjordman. After the Breivik massacre outed him, he was driven from a job that he was good at, and which was not at all affected by his political opinions. But that didn’t matter — being prominently exposed as a “xenophobe” and “racist” and “right-wing extremist” made him essentially unemployable.

My situation was far less dire, however. By the time I went public I had been unemployed for four years, and at my age the chances of finding a telecommuting job in my field were growing slimmer all the time. I hadn’t quite reached the point of “nothing left to lose”, but I was close enough that I decided to take the plunge.

Since then, in addition to the income we get from our quarterly begging, I’ve gotten odds and ends of contract work doing programming or editing. The people I do jobs for are unconcerned about my un-PC political opinions, or are even in agreement with them. If only the latter owned major corporations — I might still be able to get full-time work.

It was scary at first to see my real name out there as a byline on my articles. I felt exposed. But that didn’t last; I soon got used to it. And, strangely enough, the people and groups that track “hate sites” seem less concerned with me after my real name became available. Some of them — I won’t deign to name the sites — had been sniffing along my trail like bloodhounds for several years. Now there was no longer any point to it. The thrill of the chase was gone, and they mostly lost interest.

Gates of Vienna had become a transatlantic portal by then, and Dymphna and I decided to concentrate our efforts on making it serve that function as well as it possibly could. Going public under my real name contributed to the process — you get taken more seriously that way than you do if you’re anonymous.

Such was the calculus we used at the time. And here we are, almost six years later, with a whole lot of turbulent water under the burning bridge since then. A lot of crises, a lot of horrific events. And a toughening of my resolve to keep on doing this as long as I can.

It was an action that couldn’t be undone, but it was worth doing. I’m glad I decided to do it.

Would it be the same with any irrevocable decision made for the sake of principle? What about one that is irrevocably fatal?

May the Lord let that cup pass from me.

Dymphna will be back this time tomorrow.

4 thoughts on “Actions That Can’t Be Undone”