But not for the people who live in this house: 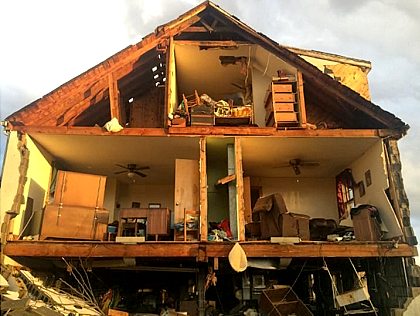 That was the scene late this afternoon just outside the tiny hamlet of Evergreen, Virginia.

Tornadoes killed four people and left a path of destruction in Virginia, the hardest-hit state. Virginia State Police spokeswoman Corinne Geller says a 2-year-old child and two men, ages 50 and 26, were killed in the town of Waverly during the storm.

Police say a funnel cloud left an 8- to 10-mile path of destruction in Appomattox County, Virginia, where one man was killed.

A Virginia County is declaring a state of emergency after a storm passed through, damaging scores of buildings, injuring several people and killing one man.

Appomattox County Administrator Susan Adams said by phone Thursday morning that about 100 structures were damaged. She says about 20 of those were severely damaged, including some that were flattened. She says those numbers may go up as damage is assessed around the county.

Adams says the governor has been informed of the extent of the damage and may visit the area Thursday.

The following video shows the tornado damage; you can see the same house at the opening of the clip. I drove past at about the same time this video was taken. This was the hardest-hit zone, but there was significant damage in the surrounding area, with huge oak trees down across the highway. You can hear the chainsaws at work in this footage:

The first hint of what happened came at about 3:45 this afternoon, although I didn’t realize it at the time. A line of intense thunderstorms was passing over us then — a narrow band, but very heavy rain for a brief time. I looked at the radar image, and could see that Appomattox was getting hit harder than we were.

We didn’t have any significant wind here at Schloss Bodissey, although there must have been at least an inch of rain. While that was going on, the lights dimmed and flickered several times over the space of about thirty seconds. I realized later that that must have been the moment when the trunk lines went down along US 460 in Evergreen — a sudden drain on the grid until the big breakers kicked in and sealed off the damaged region.

When the rain stopped and the sun came out, I got in the car and headed for Appomattox to go shopping at Walmart. There was no indication of anything but heavy rain in our area. The first sign of something worse showed up along the highway about fifteen to twenty miles from Appomattox: a piece of bent sheet-metal roofing in a field by the road. And then another one a little further down the road. And another. A few pieces of what looked like sheetrock. Then, a few miles later, some articles of clothing in the road. And a broken piece of plywood.

There were only two possible explanations: there had been a tornado, or a truck carrying construction waste had gone by driving too fast. I looked around, and there were none of the telltale signs of wind damage; no broken-off trees, no big branches in the road, no shingles off the roofs of houses. Everything was just very, very wet. And there were construction materials lying around here and there, at random locations.

When I got to Appomattox I went to the CVS drugstore first. I didn’t notice until a woman met me at the door that the power was out in the building. She told me there were 30,000 people without power in the area. I asked her, “Did y’all have a tornado?” She replied, “Yes, we did. Down 460” — waving in an easterly direction — “near Evergreen.”

As I pulled back onto the highway, I saw a state police car with flashing lights go by, heading east, accompanying an ambulance and an “Urban Search and Rescue” vehicle. There were also several Asplundh tree-cutting vehicles traveling in the same direction. Since shopping had just been crossed off my to-do list, I thought I might as well follow them down the road and see what it looked like.

About five miles down 460 to the east I could see the flashing blue and yellow lights ahead, and traffic slowed to a crawl. The scene was much the same as what was shown in the video — rescue workers walking around the rubble, some with chainsaws. A few sightseers. Ambulances and fire engines parked off the road. Local residents wandering around in a daze. And, most disturbingly, a car right next to highway with its roof caved in — it had obviously been flipped by the tornado while on the road. I wondered what had become of the people inside.

I know the back roads in that area well, so rather than return to Appomattox by the same route, I went as far as the next crossing, turned left, and then left again on Rough Creek Road. After going west for about a mile, the telltale signs appeared — big trees down, debris in the road. All the trees that had fallen across the road had already been cut up (everybody has a chainsaw in these parts). Even at the epicenter the damage was not as severe — the tornado must have lifted slightly by the time it came through here. A trailer near the path was undamaged.

Back in Appomattox the power was still out, so I headed home. It was dark by then, and there were no lights in evidence along the road until I had gone ten miles or so.

The area where I had first seen the pieces of roofing was a good seventeen miles as the crow flies from where they had been lifted off of houses and barns. It was an eerie thought — clothing and big pieces of roofs and walls dropping out of the sky in the middle of a torrential downpour, but with no significant wind blowing.

Here’s a brief report from The Lynchburg News and Advance about the storm. It says there was a second touchdown somewhere else in Appomattox County, but I didn’t see that one.

4 thoughts on “A Near Miss”