WARNING: People who suffer from PTSD may want to skip this post. 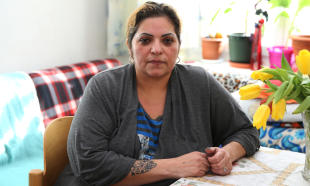 This story has been in the media a lot in Austria lately, two months after it occurred. The news wasn’t released immediately, probably because of the age of the victim.

The boy’s mother is of Serbian origin. In the following interview, she expresses her outrage — as an immigrant who obeys the laws of Austria — against a culture-enricher who justifies his monstrous behavior by the unbearable sexual deprivation he experienced after four months of abstinence since he left Iraq.

Many thanks to Nash Montana for translating this grim article from Heute.at:

Boy Raped in Pool: “He screams and cries every night”

Dunja R. will never be able to get the phone call that she received from her son out of her head, because he was uncontrollably sobbing. But she felt it right away: Something terrible had happened to him.

It was only last week the police made it public: It was back on December 2nd; a child molester had been arrested at the Wiener Theresienbad, a Vienna public pool. A refugee (20) from Iraq dragged the 10-year-old Goran R. (all names changed) in a toilet cubicle and raped him there. The boy suffered such severe injuries that he had to be treated at the AKH [General Hospital].

During the interrogation the perpetrator confessed. He said came to Austria via the Balkan route, and he hadn’t had any sex for four months. At the pool he “submitted to his lust”. In an interview with Heute.at, Goran’s Mother Dunja R. (43) tells of the suffering of the small victim.

Heute: How did you learn of the crime perpetrated on your little boy Goran?

Dunja R.: I am a single mother of five children. Money is always short. But Goran loves to go swimming. So I gave him €3 pocket money on December 2nd for Theresienbad near where we live. After school he could go and use the pool. Three hours later he called me and he sobbed and cried so hard that I couldn’t understand a word. Then someone from the pool personnel took his cell phone and said: “Please come here, your child has been sexually attacked!”

Heute: Your son confided to the pool supervisor?

Dunja R.: Yes — and he immediately called the police. As I arrived at the pool I saw my crying child through a glass door, and a man in swimming trunks with his hands cuffed. My sister who came with me, immediately wanted to jump on the man. But the cops pulled him away and surrounded him.”

Heute: How did the offender get into contact with your son?

Dunja R.: Goran was playing with a 15-year-old in the pool; the Iraqi was the 15-year-old’s companion. As my son went to take a shower, the man motioned him to come to him. Goran thought he needed something — but he was immediately pulled into the cubicle. I raised my children to be helpful. Today I have to say: Unfortunately.

Heute: Who is helping your son cope with this experience now?

Dunja R.: The Children’s Protection Center “Die Möwe” is supporting us a lot, they’ve found us a lawyer and are providing therapy.

Heute: You are not concerned just about the physical injuries to your son?

Dunja R.: Absolutely. Because the scars left on his soul may never heal. The boy can only sleep when I give him Trittico pills. He screams and cries every night. And when he sees my desperation, he turns away from me. It is as if he is erecting a wall around himself. At school Goran has talked of killing himself. His pain is literally pulling the floor out from underneath our entire family.

Heute: Have you heard how the offender is justifying his crime in his interrogation?

Dunja R.: yes, with “a state of sexual necessity”, and it makes my blood boil. I come from Serbia, I lived for five years in a Caritas home and I have gotten along with many different people from many different nations. I am certainly not a racist. But this self-serving declaration of the Iraqi is egregious. Or is anyone going to have sympathy for me if tomorrow I rob a bank and then I’ll say, I just didn’t have enough money for my children?

Heute: Do you wish that the man who raped your son would be deported?

Dunja R.: Yes — but only after he has served his prison sentence here. Because I have heard what all can happen to child molesters in prison.