I think that the take-down happened in international waters. The Iranians would have known to the minute when the boats were leaving Kuwait, and their probable course to Bahrain, so an intercept would be simple. They know our ROE would be “Do not shoot EVER unless you are fired upon first. PERIOD!!!”

So, if the Iranians jam our boats so they cannot communicate, and then swoop in close, it’s almost a guaranteed outcome. They KNOW we won’t shoot first! So by coming in closer and closer with weapons aimed at our sailors, overwhelming them with numbers at point-blank, then on loudspeaker they say, “Step away from your weapons or we will slaughter you!” At that point, it’s a fait accompli. Once our sailors step back from their guns, it’s over. Next, “Take off your jackets and weapons” etc, until they are in t-shirts only. Then “Kneel down!”

Step by step they get their way, based on a deep understanding of our ROE and our responses at every stage. Once they have control of our boats, they can drive them to Farsi Island, and remove every single GPS device, radar, cell phone etc. Then, there can be no proof of where the attack happened. And worst of all, Obama and Kerry are happy to go along with the lie, in order not to upset the nuclear deal applecart.

Matthew Bracken sends this graphic as a commentary on yesterday’s news from the Persian Gulf: 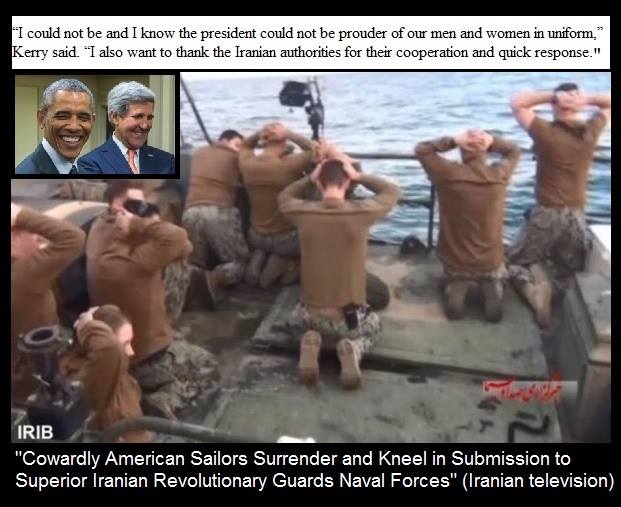 Additional commentary by Mr. Bracken was posted yesterday at WRSA:

I rarely pull out my dusty old trident, but in this case, here goes. I was a Navy SEAL officer in the 1980s, and this kind of operation (transiting small boats in foreign waters) was our bread and butter. Today, these boats both not only had radar, but multiple GPS devices, including chart plotters that place your boat’s icon right on the chart. The claim by Iran that the USN boats “strayed into Iranian waters” is complete [bovine effluvia].

For an open-water transit between nations, the course is studied and planned in advance by the leaders of the Riverine Squadron, with specific attention given to staying wide and clear of any hostile nation’s claimed territorial waters. The boats are given a complete mechanical check before departure, and they have sufficient fuel to accomplish their mission plus extra. If, for some unexplainable and rare circumstance one boat broke down, the other would tow it, that’s why two boats go on these trips and not one! It’s called “self-rescue” and it’s SOP.

This entire situation is in my area of expertise. I can state with complete confidence that both Iran and our own State Department are lying. The boats did not enter Iranian waters. They were overtaken in international waters by Iranian patrol boats that were so superior in both speed and firepower that it became a “hands up!” situation, with automatic cannons in the 40mm to 76mm range pointed at them point-blank. Surrender, hands up, or be blown out of the water. I assume that the Iranians had an English speaker on a loudspeaker to make the demand. This takedown was no accident or coincidence, it was a planned slap across America’s face.

Just watch. The released sailors will be ordered not to say a word about the incident, and the Iranians will have taken every GPS device, chart-plotter etc off the boats, so that we will not be able to prove where our boats were taken.

The “strayed into Iranian waters” story being put out by Iran and our groveling and appeasing State Dept. is utter and complete BS from one end to the other.