The following photo shows a non-disclosure agreement German women were to sign in order to receive treatment in Cologne hospitals after they were attacked during the Groping Jihad on New Year’s Eve.

Update: I should have added that neither Vlad nor I can vouch for the authenticity of this document. However, it is completely consistent with the behavior and policies of the German government concerning the Groping Jihad on New Year’s Eve and subsequent events.

Further Update: Vlad has posted a translation of a note that has been circulating in Germany:

So we should all take this with a grain of salt.

Final update: Yes, it seems most likely that this document is a fake, based on the various observations in the comments here and elsewhere. However, despite the recommendations of some of our commenters, I will not take it down. I don’t take things down once they’re posted. I just add updates.

As for “discrediting” myself — the post can only discredit me if I fail to acknowledge that it’s a fake when I learn of it. Acknowledging error or misjudgment never brings discredit.

Taking down a post and pretending it was never there — that’s what brings discredit. It’s cowardly, and I won’t do it.

Besides, I think this thing could stimulate a useful discussion.

It must have seemed true to a lot of Germans for it to spread as far as it did. That means people who saw it must have thought it was credible, and reflected the likely actions of the State, based on what they had observed of its recent behavior.

If it hadn’t seemed plausible to many Germans who use social media, this hoax would never even have crossed the Atlantic and come to Vlad’s attention. Doesn’t that say interesting things about the current state of affairs in Germany?

I’ve moved the image and the translation below the fold, so that people who are offended by its very existence may be at least slightly mollified. 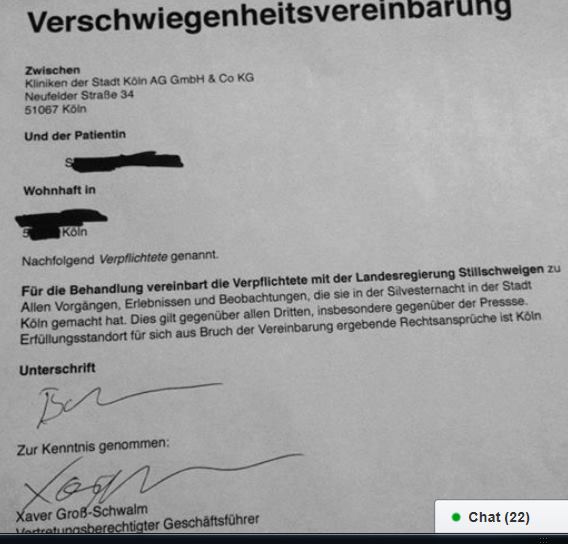 Below is Nash Montana’s translation of the text, which was published earlier at Vlad Tepes in a slightly different form:

And the female patient

Hereinafter referred to as The Obligant.

The Obligant agrees with the government to observe silence pertaining all incidents, experiences and observations that she made, pertaining to the incidents during Silvester night in the city of Cologne. This is valid against all other third persons, but especially towards the press. If Obligant breaches this confidentiality agreement, a complaint is to be filed with the court of Cologne.