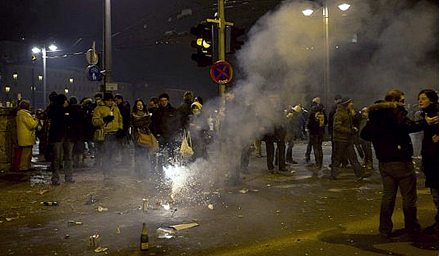 On New Year’s Eve there were simultaneous attacks on women by large groups of “southern-looking” men in at least seven major German cities. Most of the news stories have been about Cologne, but similar events occurred n Stuttgart, Hamburg, Frankfurt, and other cities. The modus operandi was the same everywhere: massive numbers of young Middle Eastern or North African men, gathering suddenly as if it had been planned in advance, and harassing, robbing, groping, molesting, and even raping young women who were out for the evening’s celebrations.

A similar situation was reported in Helsinki, but the Finnish authorities were tipped in advance and managed to avoid the worst by arresting the ringleaders.

Now we learn that the Groping Jihad also came to Austria. The following account from OE24.at: describes the events between Christmas and New Year’s in Salzburg and Vienna. Many thanks to Nash Montana for the translation:

Germany is in a state of shock. Now in Austria as well victims are breaking their silence.

“One guy took my friend in a choke hold. He kissed her and licked her face.” Sabrina S. (name changed) is still in shock (see interview below). On December 26th she and her friends went to visit a new club in the historic district of Salzburg. On their way home the young women were attacked at around 2 am by a gang of ten to fifteen foreign young men.

The friends sent off a warning via Facebook. “To all girls. Please be very careful, if you’re walking in girl groups or alone in the Salzburg historic district.” The friends didn’t report the incident. “We just were not aware of the bigger picture and greater scope of this attack.”

Robert Holzleitner from the office of the district attorney Salzburg, confirmed: “There are many reports because of sexual attacks.” He did not disclose any detailed numbers.

The Salzburg Police has knowledge of incidents like the one Sabrina S. has experienced. Why are these incidents not reported by the victims? “Those are sex crimes. The protection of victims is very important,” says the police spokesperson Valerie Hillebrand. That there is political pressure to conceal sex crimes committed by young foreigners is not the case.

Vienna was also affected. One reader reported of incidents on the Calafati Plaza on Silvester night [New Year’s Eve]: Young women were groped, harassed and molested by foreign men. According to the police, there have been no reports filed.

In Cologne over 100 reports have been made by victims so far. Yesterday the first three offenders were arrested. Germany is in a state of shock after the attacks were first ignored by the media. The ZDF admitted that it was a mistake not to report about this topic from the get-go.

Victim Sabrina S.: “We were completely at the mercy of these men”

ÖSTERREICH: What happened that night?

Sabrina: We were on our way from the Griesgasse headed to the Staatsbrücke, when about 15 meters ahead of us, a group of men started to scream and began to walk towards us. Everything went so fast, and we didn’t have any time to react. But we instinctively realized that they were going to cross a red line.

ÖSTERREICH: Were you hurt?

Sabrina: I wasn’t; I was all the way in the front. But my two friends were held down by the men. They still tried to force the men to leave them alone, but it was to no avail. They were overpowered. One of my friends then was taken into a choke hold; her face disappeared in his jacket. He then started to forcibly kiss her and he licked her face up and down. She said that at that point she didn’t have any strength left to try and free herself, she was completely at his mercy.

ÖSTERREICH: How did you manage to help them?

Sabrina: I walked towards them and I took the hand of the guy who had my friend in the chokehold, and I just grabbed his hand and pushed it away. She then managed to punch him with her fist right between his legs. But everything went so fast. And our other friend was also being held, though hey didn’t touch her as close as that.

ÖSTERREICH: Did you call the police?

Sabrina: No, because we just weren’t aware of the full scope of this incident. And we were really shook up. But once we published the whole thing on Facebook, that’s when we finally started to realize that this was a much larger problem, and that so many more girls and women were affected by these attacks and went through similar experiences. Many wrote me that they too had been harassed and molested at the same spot, or by the train station or by the Makartsteg. One girl told me that during the Silvester night she nearly got dragged away by a gang of men in front of the town hall. But some people who were passing by helped her free herself. And anyway, we can’t even give a description of the offenders.

25 thoughts on “Sabrina’s Story: The Groping Jihad Comes to Austria”