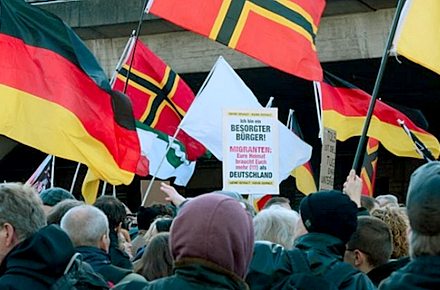 As a follow-up to our earlier post, here is a first-hand account, accompanied by a video, of how the Cologne police allowed a suspected provocateur and firecracker-thrower to escape through their cordon.

Below is a first-hand account of the provocateur’s police-assisted escape, also translated by Oz-Rita. It was published earlier at Vlad Tepes in a slightly different form.

From sources here and here:

I have just come from Pegida Cologne. The police made us run an unbearable gauntlet.

The way the police behaved today, I have never experienced anything like it. I am completely speechless and still so angry that, even as an adult man, I feel like crying. I have never seen so much hatred as several policemen have thrown at us today.

One woman in our group tried to leave the demonstration because the police aimed the water canon into the crowd of the participants, moms and dads. A policeman hurled her back into the crowd by the arms with the words: “Your own fault, if you go to such a demonstration!”

Already when we arrived, the police pulled us to the side and COMMANDED us to show the contents of our pockets and bags.

A paper bag was ripped out of the hands of an acquaintance. No friendly word was spoken, not even a reasonable tone. It was then that I told people in our group I feared bad things would happen today. And I was right.

If the media everywhere now report that the mood was heated from the outset, I can only say that these are blatant lies. The place was so packed with people that it was a joy to behold. The speeches were super, the calls “Merkel must go, we are the people, Jäger must go” echoed across the square. It was a super atmosphere.

When the march was about to start, the police stopped it every few minutes. We were stopped every 100 meters. In between one firecracker exploded. ONE FIRECRACKER! ONE SINGLE ONE! After ten minutes, the march was stopped completely.

We stood on the same spot for about 20 minutes without anything happening. We just stood around. Shortly afterwards some more firecrackers exploded, no more than five or six, I guess, from memory.

Attention: mark well my next point: Only a few meters from us, a man threw something with his hand to the side. We did not see what it was. We only saw the movement of his arm to the left. I personally did not pay much attention to it, I probably thought of a fag (cigarette). Two seconds later there was a blast next to us so strong that I thought my body would be torn to pieces. I immediately looked at the man, he walked away. What a g*****n a*****e, I thought to myself, is this idiot completely sick in the head?

This guy only provokes, so that the police can take action against us faster. The only thing I remember of the man is that he wore a grey felt jacket, in fashion right now, and that he was really tall, 1.90 or even 2 meters [6’3” – 6’7”]. I would not remember his face, but let’s get back to that later: Although the police officers realized that several thousand people (not 1,700 as the media reported, you can see that for yourself in the videos) were standing on the same spot, did not know what was going on, and became increasingly restless because nothing was happening and no one knew how it would continue, they still brought out the water cannons, very well visible from a long distance away, facing Pegida.

That’s when we became frightened. At that moment, the police provoked panic among the people. Please note that the few members from Hogesa were not the mass. The overwhelming majority of people were decent citizens, of mature age. Women, a few children, men.

At this moment I said to my friend, Stephanie Abt: “Now they will start to produce the TV pictures the media demand! “ When then the police announced that the march had to stop and that we all had to turn back, the concert of whistles against the police was unbelievable.

People shouted: “Where were you on New Years Eve?” and “We want to move on”, or “Traitors”. At the front water bottles were thrown at the police. Errrrrrrr stop: PET-bottles [recyclable plastic, made of made of polyethylene terephthalate]. No GLASS bottles. And beer cans.

So definitely no projectiles such as paving stones or other dangerous objects. That is not an excuse, simply an explanation about what kind of projectiles we are speaking of here. They were non-dangerous plastic bottles.

Shortly thereafter, the crowd was sprayed with tear gas. I have never in my life raised a hand against a policeman. But at this moment they treated us all, myself included, as if we were dangerous criminals on the run.

We then returned all to the stage at the Central Station. After a few minutes the first speaker, I don’t remember who it was, took the mike and began to calm the people down. Now you have to imagine people sitting around everywhere, some lying down. They all had massive injuries on their faces, in their eyes, some women cried out in pain, men howled snot and water because they had serious burns on their faces, especially in the eyes. Some had bleeding lacerations on their heads. Among all the injured there were just three, perhaps four members of Hogesa. The rest of the injured were those family fathers, mothers, a few young people, boys and girls, as I have mentioned before.

No emergency doctor, not even paramedics came to the injured people. The police simply left them to them to their own devices. NOT EVEN THE POLICE TOOK CARE OF THE WOUNDED! THEY STOOD CALMLY BY AND JUST WATCHED!

Eventually other event participants supplied them (the injured) with bottled water. Eyes were rinsed, tissues were pressed into wounds. Meanwhile the police continued to provoke in such an incredible way that one can only say it was unworthy of a police force of a nation of laws.

THEY DROVE 2 WATERCANONS with their bumpers almost touching the knees of the participants who stood before the stage. Aiming at adult people with those huge water cannons, which were as menacing as tanks, nearly touching the feet of the participants. The rest of the participants focused on the speaker. It was completely quiet again. I guess the people were still partially in shock. In the middle of the speech then the sudden announcement that the event had been declared as “over” by the police. Why? No idea. It was absolutely quiet. Nothing more happened.

The spokesman announced that the event was terminated and at that moment the police started moving again and encircled us. As we wanted to hastily leave the place at the opposite side of the square, we were faced with a police block!

We (were told we) should leave the place in the opposite direction. I just looked at the policeman and asked him if he is pulling our leg. I said verbatim to him he should look in the direction into which he wanted to send us. There were water cannons, and police were spraying defenceless participants with tear gas. He could not have cared less. Here we could not pass through. So there! We were trapped. Behind us water canons, tear gas and rubber truncheons, and in front of us police who simply prevented us from following their orders to leave the place.

At this moment, the guy from before, with the firecrackers, appeared about two meters from me. Immediately I yelled at the police that this was the guy with the explosives. The guy pulled out his wallet and showed it to the policeman. Next to him was another man: mustache, approximately 1.70 m [5’7”] tall. He pulled a leather pouch from his back pocket and showed it also to the police. Although I screamed that the police should hold the guy because he was the one who had thrown firecrackers into the crowd, the police let him and the second man I had not seen before climb over the barrier and run into the Central Station.

The police told us that they were media people. They did not stop them to check their identities. It is absolutely necessary to clarify if it was not the police themselves who threw the firecrackers to discredit the event. Those who, like me just now, have watched the whole video, will find that the police played a very strange game here.

I herewith suspect the police very publicly and officially of a deliberate collision course in order to harm Pegida. Pegida has already appeared 43 times in Duisburg. With Hogesa and with other hooligans, with citizens, with older, with younger participants. With men, with women.

Never before has there been an escalation. But just in Cologne the atmosphere explodes?

No. The game played here is played under a false flag. And that must be clarified.

22 thoughts on “Provocateurs in Cologne, Part 2: “The Game is Played Under a False Flag””