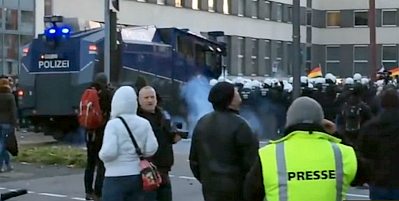 Last Saturday’s PEGIDA demo in Cologne was broken up early by police using water cannons and tear gas, ostensibly because some of the demonstrators wore face masks (against the rules) and set off fireworks (against the rules). However, PEGIDA supporters were convinced at the time that the incidents prompting the shutdown were staged by provocateurs, and not any of the legitimate participants in the demo.

Since then evidence has surfaced supporting these assertions. The following material was originally posted at Vlad Tepes in a slightly different form. First, a note from Oz-Rita, who translated the brief article:

I just came across this article and video regarding last night’s PEGIDA demo in Cologne, which asserts that the demo was manipulated. I did a quick translation of their text, and you will also find the video there which they say is the proof that journalists provoked police with firecrackers that had been banned. I cannot see on the video, however, WHO ignited the firecrackers, but you might.

Now watch the video. I see a guy with a camera who is almost certainly the one who lit the firecracker and threw it. Watch him stroll across the frame from right to left, do something you can’t quite see, and then turn to take pictures of the effects of his action as the firecracker goes off:

The translated article from Press Censorship:

SENSATION: In the demo in Cologne on 01.09.2016 the police, after repeated notice, used tear gas and water cannons, as requests from the police to ignite no firecrackers were ignored!

The firecrackers were not fired by the demonstrators, but by a person with a press pass and a camera, so probably a journalist. Due to this action, police used tear gas and water cannons and the demonstration escalated and was disbanded later! Here in slow motion the proof: (Unmistakably “press people” who lit firecrackers).

There’s much more to come on this in Part 2. Stay tuned.

33 thoughts on “Provocateurs in Cologne, Part 1”