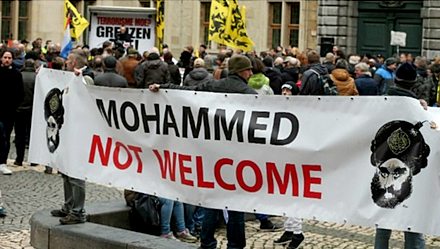 We reported earlier today on the expansion of PEGIDA to new locations in Europe, including Flanders.

The following article from De Redactie takes a left-slanted look at PEGIDA Vlaanderen. H. Numan, who translated the piece for Gates of Vienna, includes this prefatory note:

This article is reporting on one hand and warning for Pegida with the other. It is not unbiased reporting, but the careful sending of a message. Pay particular attention to the Hitler photo.

You may be absolutely certain that the journalist who wrote this obnoxious stuff is very progressive.

Pegida demonstrates against Islam, Allah and Mohammed in Antwerp

In Antwerp 300 supporters from the anti-Islam movement Pegida demonstrated. The “Patriotic Europeans Against the Islamization of the Occident” is originally a German protest movement, which, in their own words, act against Islam and against “the Islamization of Germany and Europe”. The demonstrators in Antwerp were addressed amongst others by parliamentarian Filip Dewinter of the extreme right-wing Vlaams Belang [Flemish Interest]. 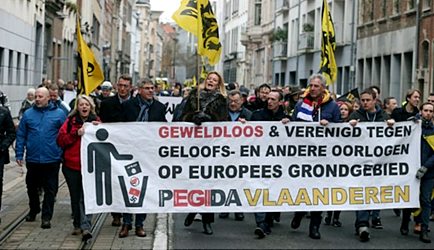 [banner in the first photo: “Violence-less (without violence) & united against religious and other wars on European ground]

The arrival of hundreds of thousands refugees in Europe seems to give Pegida new life. That hasn’t escaped the notice of Filip Dewinter, the leader of Vlaams Belang. “It’s the time for people not just to be sick of it, but also to go out and resist against the politically correct dictatorship that rams multiculturalism down their throats and compels them to live together with a religion — what did I just say? — an ideology, Islam,” he said to our journalist. According to him, Islam is only out to conquer Europe and will never respect us.

Amongst the demonstrators was Lutz Bachmann, the founder of Pegida in Germany. Bachmann made the news last year because of a photo in which he posed as the German dictator Adolf Hitler.

During the demonstration Flemish banners were carried, but also a controversial banner depicting the prophet Mohammed. They called Allah ‘a lie’. Islam was depicted as ‘a backward desert religion’.

The demonstrators want Europe to close its borders for more refugees and referred to Cologne’s rape scandal.

14 thoughts on “Progressives Raise the Alarm About PEGIDA Flanders”