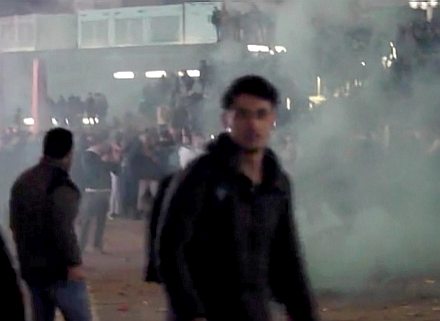 Below is another first-hand account of what happened in the Hauptbahnhof in Cologne on New Year’s Eve. Many thanks to Nash Montana for translating this interview from FOCUS Online:

“As my best friend fell to the ground, immediately four men pounced on top of her”

The outrage is huge after the attacks in Hamburg and Cologne. Young men surrounded, robbed and molested women during the night. FOCUS Online spoke to one victim about what happened.

FOCUS Online: How did you experience the Silvester night?

Lisa M (name changed): As we arrived at the main train station, we immediately noticed the huge mass of men, but nothing had yet happened. But as we got onto the escalator, it started. My friend who was walking in front of me lost it and started to wildly flail with her arms and hands kick with her feet. My other friend behind me was crying and screaming. The men just poked their fingers into everything.

We tried to get out of that mass as quick as possible, and went to a platoon of cops who were standing there around the corner. We just wanted to leave. The cops then walked through the station, but of course we couldn’t remember what the men even looked like that touched us everywhere. There were so many. And it wasn’t just one hand here and there; no, there were thousands of hands everywhere.

FOCUS Online: There are many reports that the perpetrators were mostly foreigners. What do you think?

Lisa M.: As we got back on the train around 4am, the whole train was packed with foreigners. And even before at 12:30 am, all the men who attacked us looked like foreigners.

FOCUS Online: What do you think those men wanted from you?

Lisa M.: Obviously, theft wasn’t the main thing on their minds. Nobody tried to get at our bags. They specifically aimed to touched us. And not just one hand on your butt or something; they stuck fingers into everything they could. There was absolutely no possibility to escape the train station without going through this.

FOCUS Online: What happened to you then?

Lisa M.: One of my friends, the one that cried and screamed, wanted to get back home right away. She ended up sitting on the ground next to a doorman at the party where we went. She wanted to get a taxi, but there wasn’t a taxi that dared to come that close to the train station. Finally the doorman summoned her to the taxi.

FOCUS Online: How was the situation at the main train station in the meantime?

Lisa M.: As we went to the train station, the escalator was completely full of men. My best friend fell down and immediately four men pounced on top of her. I was able to pull her out of the pile with the help of a security man who just happened to come by when his shift ended, and we got on the train really fast. But only after the doors closed, I realized: Even in here it was packed with men. The security man guarded us in the train, but I still got harassed and molested, my arm was grabbed, my hair got touched.

FOCUS Online: What do you think of how the police acted?

Lisa M.: The police were standing really close by and they immediately formed a group to help us after we stood in front of them crying. And I believe that we were the first ones who reported these attacks.

As we got back to the train station around 4am, there was not a single cop left in sight. Between the Dome [cathedral] and the waiting room there stood one cop car, but right in front of the main train station there was nobody.

The masses of men were simply infinitely frightening, even hours afterwards on the train home. There wouldn’t even have been enough police to handle this. I felt like I was in a foreign country: totally alien and extremely unsafe.

FOCUS Online: The Spring Festival is coming up. What will you do? Will you do the same you did on Silvester?

Lisa M.: We will never go to the main train station again on such days. If I can avoid it, I will simply not go to Cologne anymore altogether, and especially not in the evenings. I am avoiding masses of people and gatherings and I won’t go to any more parties or events here.

FOCUS Online: Has there been a change in your daily routine now? How do you deal with what happened?

Lisa M.: Well, for instance, if back home I got to go to the supermarket, I first look around at who-all’s inside to see who’s there and whatnot. There are smaller groups of men that have gathered there too in the past. So now I am more mindful and I check out my surroundings carefully. I’d rather leave and go back home, when there are too many men standing around together.

FOCUS Online: What do you think of increased video surveillance in Cologne?

Lisa M.: Basically I think that’s a good thing, more surveillance, but I will under no circumstances go to the Spring festival. I don’t believe any of us will. And that despite the fact that we really would have liked to, and have done so in the past.

I believe that against these masses even the police didn’t have a chance. They simply didn’t have enough personnel.

FOCUS Online: Mayor Reker suggested the publishing of a code of behavioral conduct for young women. What do you think?

Lisa M.: That isn’t so wrong, but it wouldn’t have helped one bit at Silvester night. To flail your arms and try to hit around you was the best alternative, because we could see that the men didn’t expect these kinds of reactions from us. We also couldn’t get any help from strangers, there was nobody that could have helped us, there was no one. Everything went way too fast, and they were way too many. If we hadn’t have hit out with our arms and defended ourselves, then probably worse would have happened.

FOCUS Online: Did you file a police report?

Lisa M.: No, because in my opinion it’s useless. I can’t identify the perpetrators ,anyway; there were simply too many. And also it really would be too hard for me to go through it all again and live through all the details again.

6 thoughts on “Lisa M’s Story: “There Were Thousands of Hands Everywhere””