The following op-ed by Michael Stürzenberger was originally published at Politically Incorrect. Many thanks to JLH for the translation. 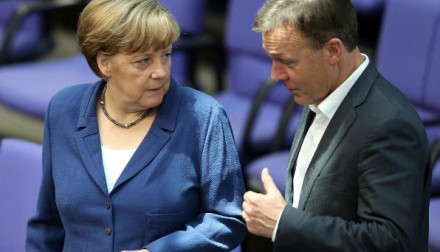 The SPD party chief Thomas Oppermann is accusing CDU’s Chancellor Merkel of an anemic conservative profile, which has led to the strengthening of the AfD. Long-established conservatives no longer have a political home in the CDU, he said, leaving millions of voters to migrate to the AfD. The increase for the AfD is attributable, above all, to the fact that the government has been the picture of helplessness and chaos in the refugee crisis. In saying that, Oppermann is also being self-critical, for the SPD, as part of the grand coalition, shares in the responsibilities of the government.

The SPD party chief Thomas Oppermann has criticized the-less-than conservative course of Chancellor Angela Merkel and called it complicit in the strengthening of the AfD. “Long-time conservatives no longer have a home in the CDU,” said the Social Democrat in Welt am Sonntag. “Merkel is making millions of citizens politically homeless. That is a serious dereliction of duty and a reason for non-extreme voters to move to the AfD.”

Oppermann is thus assuming the arguments of conservatives in the Union.[1] Of course, until recently, his party has complained about just the opposite in the Union. SPD vice chair, Ralf Stegner, recently criticized the CSU sharply for getting chummy with the AfD and, to some extent, taking on its mottoes. “And the CDU does nothing,” Stegner complained in an interview with the German Press Agency.

So the hacking and stabbing of Super Election Year 2016 has begun. It is more than a little significant how much the growth of the AfD worries the SPD. A competition is swelling here that is not prepared to bend to the politically correct mainstream. And simultaneously, the leftward-drifting CDU is taking voters from the SPD, so it makes sense from Oppermann’s point of view to criticize his coalition partner’s insufficiently conservative profile. The political landscape is livening up, and that is characteristic of parliamentary democracy in which the parties compete for the favor of the voters.

But occurring again and again, among the politically incorrect, are the terms “system,” “black-red-green unity party of Germany,” “Gleichschaltung” [Nazi-speak for forcible coordination], “quasi-dictatorship” and “GDR 2.0” — and recently on Michael Mannheimer’s blog. Is this an appropriate analysis of the present situation or a great exaggeration?

There are certainly sufficient grounds for serious criticism, since many politicians lie when talking of Islam, asylum, refugees, immigration and the EU. So do many of the media, especially those owned by the state. Criminality among foreigners is to be kept as quiet as possible, laws are serially disregarded and the EU is in substantial difficulties.

But can we actually speak of a collective “system” that is at work here? That is working — cooperatively, intentionally, beyond parties and media — towards the “abolition of Germany”? According to a secret master plan, like a “new world order,” possibly directed from abroad, by the USA or secret forces in the background?

Critics of political correctness and the present mainstream trend must make sure to be taken seriously and not be classified as “conspiracy theorists.” At the end of this last year, PI put the question of whether there is a comprehensive system of Germany abrogators, and the response from 82% of PI readers was “Yes”. The question should be made more specific: Is this system — aside from the known leftist anti-patriots — centrally organized, spanning parties and media?

We must not forget that there are myriad exceptions in this self-imposed principle of political correctness which was installed in politics and the media by leftist opinion-makers. More and more politicians and journalists are no longer willing to accommodate themselves to this mainstream — especially in view of recent developments — and dare to contradict it. Even when a storm of hypocritical leftist outrage wells up in proportion to the dosage of contradiction.

Even if there were a “system” of forced conformity, the following questions would have to be answered:

How is this “system” constituted politically? Only of the “Black-Red-Green Unity Party of Germany” i.e., CDU/CSU/SPD/GREENS, or are the LEFT, FDP, even AfD included?

How does this “system” function? Do they all meet in secret circles and make agreements?

What are this “system’s” intentions. Perhaps the abrogation of Germany?

What does this “system” want, after its goal is achieved?

Is the entire landscape of the press “gleichgeschaltet”?

How does this “Gleichschaltung” function? Is there already a superordinated propaganda ministry?

Some people are already talking about a “current quasi-dictatorship” — does that mean that all elections and surveys are being manipulated?

Is this “system” operating self-sufficiently in Germany or is it directed from abroad, maybe from the EU or the USA?

How can this “system” be overcome? Maybe with a popular uprising — an armed revolutionary putsch? Occupation of the Bundestag? Jailing the representatives?

And what comes next?

These are all unavoidable questions in a discussion of the “system.” If they cannot be answered definitively, the whole thing may be classified as a conspiracy theory.

It is my firm opinion that there is no organized “system” working collectively beyond party bounds. That is more a point of view represented by the NPD [neo-Nazis], the Rights, The IIIrd Way & Co. As in the era of the Weimar Republic, these groups are interested in an abrogation of the hated party system — a revolution, a kind of “enabling ordinance” to dissolve the other parties and set up a German nationalist dictatorship with a Germanic population.

It is very dangerous when such elements infiltrate the Islam-critical movement and maintain influence on opinion-making.

4 thoughts on “Is There a Gleichschaltung Conspiracy in Germany?”