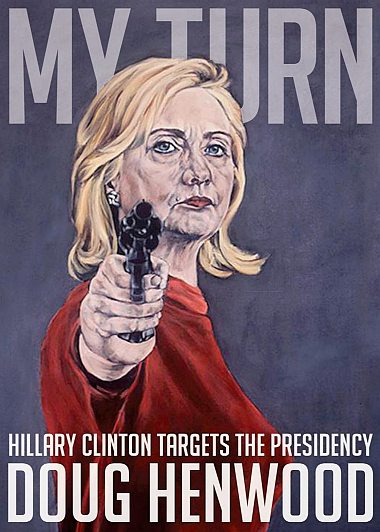 Here’s a snip from the brief editorial on that Amazon page:

Hillary Clinton is running for the presidency with a message of hope and change. But, as Doug Henwood [author] makes clear in this concise, devastating indictment, little trust can be placed in her campaign promises. Rigorously reviewing her record, Henwood shows how Clinton’s positions on key issues have always blown with the breeze of expediency, though generally around an axis of moralism and hawkishness. Without a meaningful program other than a broad fealty to the status quo, Henwood suggests, “the case for Hillary boils down to this: she has experience, she’s a woman, and it’s her turn.”

“My Turn” is compulsively good reading — not only for its glimpse into Hillary Clinton’s mind but for its insights into the entire Clinton political-philanthropic machine.

There is one review, a five star, and it’s very short:

“I laughed, I cried. Mostly I cried.”

The cover artist is Sarah Sole. You can do a search for her work; NSFW, so I’m not going to link it. She puts Hillary in various iconic poses — e.g., as Marilyn Monroe.

According to some sites I read, Ms. Sole is a “super fan” of Hillary. It would appear that some of the female pairings are of her and her idol… and the one of Obama and mate is equally strange.