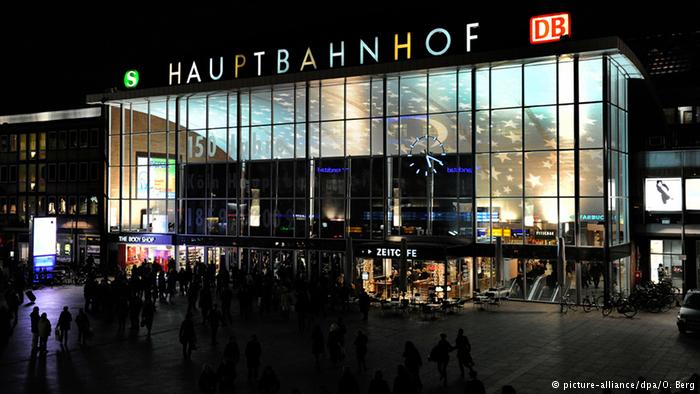 Last Thursday night — New Year’s Eve — a large crowd of “refugees” gathered in the Hauptbahnhof, the main train station of Cologne, and took advantage of the loud revelry and fireworks to avail themselves the “uncovered meat” they saw in front of them heading for the platform or alighting from the trains. A wave of harassment, groping, molestation, theft, and reportedly even rape descended upon native German women unfortunate enough to be passing through the station at that time.

The crimes committed that evening in Cologne were so blatant, and so uniformly committed by the newly-arrived enrichers of German culture, that even the city authorities were forced to acknowledge the ethnic component of what had just occurred. To be cynical about it, maybe a councilor’s daughter or a relative of the mayor were among those molested, prompting a breaking of the taboo against the discussion of immigrant crime.

It is dispiriting and horrifying to hear about these events in the center of Cologne, just across the square from the iconic cathedral that dominates the city’s downtown.

The following TV editorial was broadcast on RTL, a German television network. Many thanks to Nash Montana for the translation, and to Vlad Tepes for the subtitling:

Below are brief excerpts from several articles about the events at the Hauptbahnhof on New Year’s Eve in Cologne. First, from Deutsche Welle:

Some 1,000 men are alleged to have carried out dozens of sexual crimes on New Year’s Eve in the city of Cologne. That these crimes occurred in the city’s most famous square has left local authorities reeling.

Police in the western German city of Cologne responded on Monday to outrage over a string of sexual crimes over New Year’s Eve. According to police, the series of assaults in one of the city’s busiest thoroughfares represented a “completely new dimension of crime.”

Some 60 criminal complaints, including one allegation of rape, have been brought to the Cologne police department after women said they were molested by a crowd of men who had gathered in the city’s famous square between its central train station and towering Gothic cathedral. Authorities expect more victims to come forward in the next few days.

City police chief Wolfgang Albers said the crowd was composed of up to 1,000 heavily intoxicated men who gave the appearance of being “Arab or North African” in background.

The police chief told German news agency dpa that the incidents represented “an intolerable situation” for Cologne. His department has already assembled a task force to deal with the matter.

Mayor Henriette Reker, who made international headlines in October when she was stabbed on the campaign trail, has called a crisis meeting, which will include local and federal police, for Tuesday to address the crimes.

“We cannot tolerate this development of lawlessness,” Reker told the “Kölner Stadt-Anzeiger” newspaper.

Men of ‘Arab background’ were likely responsible for sexual assaults on dozens of women in central Cologne over the New Year, police said on Monday – as a social media storm accused police and media of a cover-up.

Around 60 complaints have been made to the police in Cologne after a group of around 1,000 men attacked revellers in the city centre in a brutal and “completely unheard of” way, Wolfgang Albers, Chief of Police in the Rhineland city said at a press conference on Monday afternoon.

Around a third of the complaints were of sexual assault, regional paper Express reported.

“There was a very large number of sexual assaults there – and in a massive way. Women were grabbed and attacked,” said Albers, adding that in one case the alleged crime fitted the legal definition of rape.

“The crimes were committed by a group of people who from appearance were largely from the north African or Arab world,” the police chief added.

From The New York Times:

German police has described a series of sexual assaults against women in Cologne on New Year’s Eve as “a completely new dimension of crime.”

Officers received numerous complaints from women who said they had been assaulted around Cologne’s main train station next to the western German city’s famous cathedral on the night from Thursday to Friday.

Cologne police chief Wolfgang Albers says witnesses described the assaults as coming from a group of up to 1,000 men whose appearance indicated they were of “Arab or North African origin.”

Hat tips for the articles: Fjordman and DV.

51 thoughts on “Groped and Molested in the Hauptbahnhof”