Geert Wilders, the leader of the Party for Freedom (PVV) in the Netherlands was one of the participants in a conference hosted by the organization Europe of Nations and Freedom (ENF). Below is the statement he gave for the occasion. 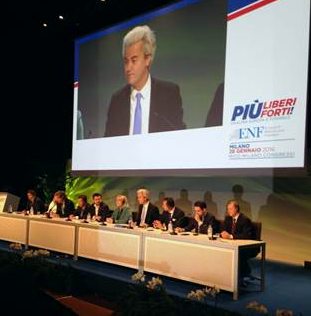 I am extremely happy to be in Milan. Because this is the city which in 2005 awarded the late Oriana Fallaci, a true Italian hero, Milan’s highest award, the Ambrogino d’Oro.

She deserved it. She was one of Italy’s greatest and most courageous women and journalists. Whenever I come to Italy, I do so in honor of her: Oriana Fallaci, whose bravery in warning against the dangers of Islamization I greatly admire. Her book The Force of Reason — La Forza Della Ragione — was one the best books I have ever read. It was published in 2004 and inspired me to start my own political party that same year, a party that today — twelve years later — is by far is the biggest party in all the polls in The Netherlands with almost 30 percent of the votes.

Thank you Italy, thank you Oriana for the inspiration. I am very proud to have been awarded the Oriana Fallaci prize in Rome in 2009.

Today our civilization is still in danger, as a matter of fact worse than ever before. We are facing an existential threat.

You can see it everywhere, in all Western European countries. Our borders have been opened to Islamic mass immigration. And the consequences are terrible.

The costs are gigantic, the attacks horrible and the threat of terrorism has never been higher.

So we need to act.

That is why we are here today in Milan. With a message of strength and unity.

Together with my good friends from Italy, France, Austria, Belgium, the U.K. and other countries we have forged an alliance. An alliance with a historic mission.

Our mission is to save and defend our nations and our Western civilization, built on the legacy of Rome, Athens and Jerusalem. The survival of our freedom, identity and values are at stake.

My colleagues and I, we ring the bells of the revolution. A democratic and peaceful revolution to regain our national sovereignty. To stop the invasion.

To protect our own people, our women, our culture. We have to become the masters again of our own borders, our own budgets, our own destiny.

Our mission is to do what our governments fail to do. We say: Basta! Finita la commedia!

The people no longer want politicians who are selling out their nation, ignoring the wishes of its citizens, and acting like politically correct appeasers and cowards.

What we need today is real leadership. Brave politicians, unlike the ones that currently misrepresent the people in so many fake parliaments, where they do exactly the opposite of what the majority of the people want. We say: enough is enough.

Most of us here are leading in the polls in our respective countries.

We are politically successful because we stand for the following five principles. The principles of the new patriotism.

One, we want to close our borders for mass immigration from Islamic countries and the asylum tsunami.

If I were to become Prime Minister of the Netherlands next year, I will close the Dutch borders at once.

Two, we must protect ourselves against the terrorist threat.

We do not want jihadis in our countries. And we must restore the safety of our citizens, especially our women. No more rape, no more sexual jihad. On New Year’s Eve in Cologne alone, over 1,000 women were assaulted, groped, raped. So far, 30 suspects have been caught. All of them North-Africans, and half of those asylum seekers.

This is unacceptable. Closing our borders is a major step towards more safety, too.

And five, last but not least, we want to stop the Islamization of our free societies. I say: no more. We chose freedom and will not compromise anymore.

We will make our countries safe, sovereign and great again. And we will succeed. Because the people and the truth are on our side.

Let me remind you of something Oriana Fallaci once said. I quote: “It is a lie to say that the truth stays in the middle. No sir: Sometimes truth stays on one side only.” End of quote.

The truth, ladies and gentlemen, indeed, is on one side only. It is on our side. So, get used to it: We are the future.

40 thoughts on “Geert Wilders in Milan: “We Are Facing an Existential Threat””