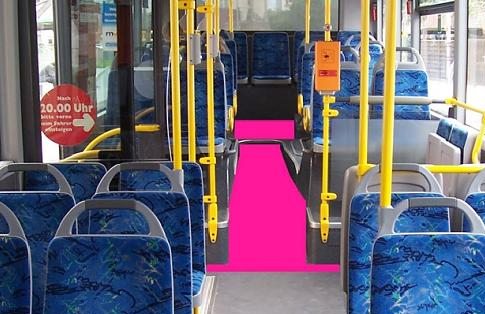 As you all know, culturally enriched incidents of sexual harassment, molestation, and rape have reached epidemic proportions in German cities. A city councilor in Regensburg has decided to get serious about protecting his city’s women, and is proposing a tough, no-nonsense solution to the issue of sexual violence by refugees: he wants to establish women-only zones on city buses. And mark them in pink, in case any of the would-be molesters are unable to read German, English, Arabic, Turkish, Urdu, Swahili, etc.

Many thanks to Nash Montana for translating this article from Die Welt:

In order for women and girls to feel safe from sexual harassment, the Regensburg City council is discussing specially designed “Lady Zones” in its city busses. They are also envisioning “Women-Only Taxis”.

Christian Janele of the Christian-Socialists (CSB) had turned in an application in November of 2015 — before the mass sexual assaults in Cologne took place. The city planning commission will discuss this issue on Tuesday.

Janele says that many citizens had expressed their concerns with him: “How will my daughter, how will my wife arrive home safely in the evenings?” These fears among the citizenry have to be taken seriously. Markings on the bus floors could establish safe zones, which only women and children are allowed to be in. Additionally, there women-only taxis should be offered in which women drivers will bring female passengers to their destinations — and the city will subsidize the taxi fares. Heidelberg has had a similar project ongoing for years, says Janele.

It doesn’t have to be pink

On the social network Facebook, the Christian-Socialists have published a photo montage with a pink “Lady Zone” in a public bus. But the post adds that the safety zone doesn’t have to be pink. Any other color would be possible as well.

Janele rejects the suggestion that his “Lady Zones” could bear any reminiscence on the US segregation of black people where they were made to sit in the back of the bus. For him it is solely about the fact that “that women feel unsafe on buses.” And the same goes for senior citizens, he adds.

Transportation Authority not particularly fond of the idea

Special markings on the floors of busses are easy to apply with minimal effort — and only need to be effective at night. “During the day this topic is irrelevant.”

But the Regensburg Transportation Authority (RVV) doesn’t think much of these ideas. “There really is no necessity in that regard. We don’t have problems in that matter,” says the manager, Kai Müller-Eberstein.

An overall strategy is needed against sexualized violence

The Federal Association of Women’s Advisory and Women’s Emergency Services says: “Of course women-only spaces such as taxis and parking places could be a sensible measure for women to feel safer in public spaces.”

But spokeswoman Katja Grieger also points out that such demands could also derail the debate in the wrong direction: “Studies show us unanimously that most assaults take place in the most nearby social settings, and that the actual crime scene often turns out to be the place where the victim lives. An overall societal strategy is needed against sexualized violence, no matter where it happens.”

Assaults are a topic elsewhere as well

And in Vienna the city council has published behavioral tips for women: “When you are waiting at a stop, it can be sensible to stand with your back against a wall or to be near other people.” Another suggestion: Women should sit next to the driver or in a car with multiple other passengers when riding a bus, a tram or a subway at night.