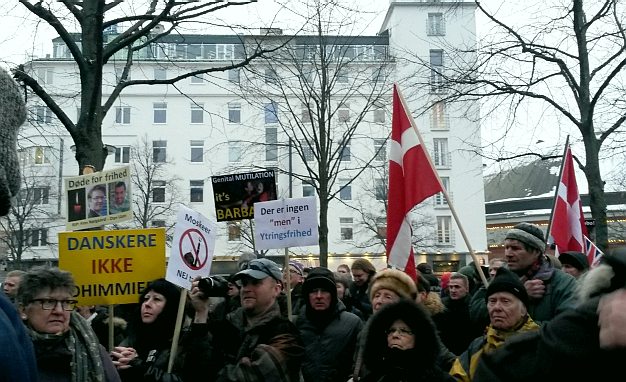 Translation of the signs in the photo, as well as I can manage:

Long-time readers of this blog are aware of my esteem for Denmark. If only I had discovered the uniqueness of Denmark when I was still young, while I still could have learned that mouthful of mush they call a language, I might have moved there and gone native. But even in my dotage I can appreciate what makes Denmark different from all the other countries of Europe west of the Elbe.

Denmark is still a nation. Danes feel themselves to be Danish, and they’re proud of it — insofar as they can be proud in a national culture of Janteloven. They fly the flag (Dannebrog), revere the royal family, and cherish their national tastes and quirks (candles and licorice come to mind). And for the English-speaking traveler, Denmark is an ideal destination, because just about everyone there speaks English.

One of the differences between Denmark and the rest of Western Europe is that the Danish police actually do their traditional job: they uphold the law, and protect Danish citizens from crime and violence. In the following video you’ll see the police holding back the “anti-fascists” who are trying to interfere with yesterday’s PEGIDA march in Copenhagen. Notice that they keep their backs to the marchers and their eyes on the lefties — they know they don’t have to worry about the law-abiding citizens taking part in the march; the violent troublemakers are all on the other side.

The same is true in other parts of Europe — you see the police keeping their eyes on the antifas and their backs to the PEGIDA people. However, in Denmark the police aren’t restrained by their political bosses from arresting violent leftists. Tommy Robinson was punched by an antifa on yesterday’s march, and responded — as is his wont — by punching the fellow back. In Britain the leftist would have been let off scot-free, and Tommy would have been arrested, but the Danish cops actually arrested the antifa thug. What a difference from London!

Many thanks to Henrik Clausen for recording this video, and to Vlad Tepes for editing and uploading it:

Here’s the brief but rousing speech given by Anne Marie Waters, one of the three PEGIDA UK guest-speakers, who fires back at the antifas for abandoning European women to the Groping Jihad waged by Muslim immigrants:

14 thoughts on “Anne Marie Waters in Copenhagen: “How Dare You Unleash That on European Women?””