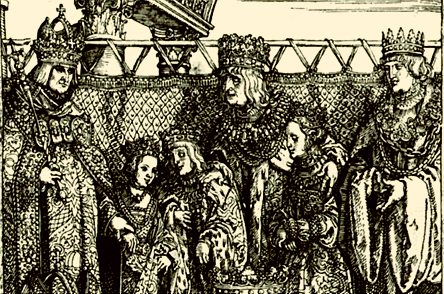 A secret meeting (secret until afterwards) took place last week between Jaroslaw Kaczynski, the leader of the ruling Law and Justice Party in Poland, and Viktor Orbán, the prime minister of Hungary. Poland and Hungary are two of the “Visegrad Four” countries, which together are looking to resist the refugee resettlement mandates that the quota czars in Brussels are attempting to enforce.

At the moment the European Union is unhappy with the conservative Polish government’s changes to the country’s courts and media, and is considering economic sanctions against the Poles for going against the diktats of the center in Brussels.

The article below from Sächsische Zeitung discusses last week’s meeting in southern Poland. Many thanks to JLH for the translation:

A Secret Meeting at the “Green Sheep”

Poland and Hungary are looking for a way to proceed together against the EU.

It was an almost perfect coup. Viktor Orban and Jaroslaw Kaczynski sat down to a trout dinner in the Polish Pieniny Mountains, while a Hungarian internet portal was the first to report on the secret meeting. Neither Budapest nor Warsaw had announced the meeting.

For almost six hours on Wednesday evening, Orban and Kaczynski discussed the political situation in Europe. The meeting was private. The report in Polish government circles was that the two had met only as heads of governing parties. Contrary to initial speculation, Polish Prime Minister Beata Szydlo did not attend.

As a meeting place, Orban and Kaczynski had chosen the unprepossessing guest house “At the Green Sheep” in the southern Polish village Niedzica. Until 1918, the mountain village had belonged to Austria-Hungary, and is therefore still a highly symbolic place for Budapest. There was no time to visit the nearby Hungarian castle.

As recently as Spring, Kaczynski had refused a meeting in Warsaw with Orban because of the 53-year-old Hungarian’s Russia-friendly policy. Now, it is said that Kaczynksi’s party, PiS (“Law and Justice”), pressed Orban for a meeting. According to Hungarian media, there was discussion of a common front in the battle against the EU-wide distribution of refugees as well as in the negotiations with British prime Minister David Cameron, who favors cutting the British welfare monies for foreign EU citizens — specifically Polish and Hungarian. That is how Cameron hopes to convince Britons to remain in the EU. Officially, Poland is vehemently opposed to these plans, but Foreign Minister Witold Wasczykowski recently offered London an odd deal. Warsaw is prepared to accept worse treatment of its workers for a firm NATO base.

According to reports from Polish press outlets critical of the government, Kaczynski and Orban exchanged ideas above all on how their plans for state reform can be accomplished in the face of EU opposition. For years, Orban has been a model for Kaczynski and his PiS. Hungary is already long past a restriction of the rights of the constitutional courts and a media reform. Thanks to an electoral reform, Orban has managed to be elected to a second term. He was criticized for that by the EU, to be sure, but he put his controversial laws into effect. Orban’s experience is important for Kaczynski in order to avoid a reduction of EU funds, commented the Polish opposition leader Pawel Zaleski.

Orban’s party, Fidesz, whose election — like that of PiS — profited from an eavesdropping scandal, is much stronger in Hungary than Kaczynski’s governing party. A two-thirds majority has several times allowed it to alter the constitution as it sees fit.

Kaczynski, who has a simple plurality in parliament, had to react more swiftly than Orban and immediately transformed the most important regulatory bodies of government. Because of the controversial reforms in Poland, the EU Commission intends to introduce a procedure to investigate possible dangers to the constitutional state. “We are initiating a process we developed in 2014,” said EU Commission head Jean-Claude Juncker on Thursday.

Brussels’ tougher stance is not a surprise. The EU made it clear last weekend that it intends to make use of the 2014 constitutionality procedure. EU commissioners Frans Timmermans and Günther Oettinger had already commented critically on the reform of the Polish constitutional court and the new media law.[1]

Kaczynski and Orban want to give a more significant role to the well-known Visegrad Group (Hungary, Poland, Slovakia and Czechia) — known until now as a debating society — and proceed in concert against EU refugee quotas or plans for an intensified EU integration. This last thing is decisively rejected by national patriotic populists like Orban and Kaczynski.

17 thoughts on “A Secret Meeting at the “Green Sheep””