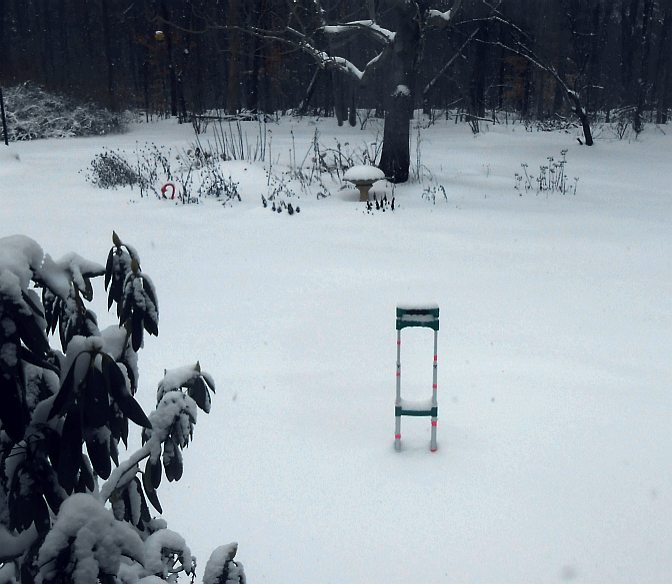 The other day I posted about the nor’easter we were expecting. Dubbed “Winter Storm Jonas” by the show-biz folks at the Weather Channel on television, it was going to leave us buried, while sparing the Northeast, after which ‘nor’easters’ are named since the majority of those monsters end up there. Except when they get stuck in Baltimore.

Well, the snow here totalled fourteen inches (37cm) or so, but its more Armageddon aspects moved north where they belonged, thus making a genuine traditional “lizzard”[That’s the term New York’s Department of Transportation — DOT — inadvertently posted on an electronic highway sign as our commenter, Babs, pointed out. “Lizzard” is somehow more descriptive of a phenomenon which winds its way up the coast, primal and destructive. [Tangentially, to see how far down the bureaucracy language destruction goes, look at the hundreds of New York State’s acronyms. How many man-hours did that cost New York tax-payers?]

On that nor’easter post the first commenter out of the gate wasn’t interested in the storm. He just showed up to fight about “idiots” who don’t believe in anthropogenic global cooling, warming, umm… “climate change”. The fact that I’d mentioned (in passing) being a skeptic caused him to call our “whole site into question”. Bless Chuck’s little heart: he vanished into the ether once a repeated attempt at name-calling was redacted. In other words, his True Belief (he never presented any proposition to prove his point) wasn’t going to be argued so he picked up his marble and left.

Another commenter posted a link to a video about this subject, fraught as it is. This contribution to the discussion is/was Dr. Ivar Giaever’s speech to his fellow scientists at the 2015 Lindau Laureate Meeting. [Ah, the things one learns in the course of doing a post.]

This Lindau Meeting is held every year in order that the Nobel winners in the sciences may, as the site says:

meet the next generation of leading scientists: undergraduates, PhD students, and post-doc researchers from all over the world. The Lindau Nobel Laureate Meetings foster the exchange among scientists of different generations, cultures, and disciplines.

Sad to say the larger Nobel Laureate “club” is infected with the usual p.c. doctrine and dogma. The women who’ve won the Nobel Peace Prize (or perhaps this represents only some of them? One can hope…) have voluntarily segregated themselves into something called “The Nobel Women’s Initiative — for Peace, Justice and Equality”.

Why would they set themselves apart like this? Because WOMEN. Or wymyn. They are sure male Laureates can’t be trusted with lofty notions — or teddy bears and candles, either. The obvious and ugly inference is that men already run “The Initative for War, Prejudice, and Disparity”. If anyone were to make these Nobelettes segregate themselves in such a manner you’d be able to hear them screeching even now about being marginalized. But self-marginalization? Female ghettoes? Just fine, thank you very much.

Bless their hearts. These mindless twits have established (drum roll, please) #WomenRefugeesWelcome, complete with its own hashtag and a multiplicity of micro-aggressions against anyone who doesn’t agree with them [my emphases]:

The women Nobel laureates act as role models, as, through their cooperation, they demonstrate how it is possible to work together for a better world — despite all cultural and religious differences. In concrete terms, they also act as mentors for young activists. As they report, one of the highlights of last year was their cooperation with Neesa Medina from Honduras, Htet Htet Aung from Burma and Riya William from South Sudan. Last but not least, the work of the women Nobel Laureates serves to protect the safety of women activists throughout the world, lending visibility to the activists’ work and thereby making it more difficult to persecute them. A conference on this topic, “Defending the Defenders!”, was held in 2015. Its aim was to help develop networks and strategies that would serve the international community to provide better support and help to women human rights activists.

Obviously one can infer they mean that male activists can form their own damned group. In other words, our very own person-of-color-community-organizer-Nobel-Peace-Prize-Poobah-President isn’t eligible for their group. “Take that, you smelly men!”

Even sadder than this feminist black comedy (oops! WAYCIST!) is the page devoted to the Paris Climate Meetings. It predictably regurgitates the United Nations-IPCC dogma, that tediously predictable and deliberately distracting “Henny Penny The Sky is Falling” dystopia being pushed as another form of wealth destruction green utopia.

In the abstract accompanying Dr. Giaever’s speech on the Laureate site (I wonder how many dared attend his talk?) there is a quote from him:

Because of the following statement from the American Physical Society:

”The evidence is incontrovertible: Global warming is occurring. If no mitigating actions are taken, significant disruptions in the Earth’s physical and ecological systems, social systems, security and human health are likely to occur. We must reduce emissions of greenhouse gases beginning now.”

I resigned from the society in 2011. First: nothing in science is incontrovertible. Second: the “measured” average temperature increase in 100 years or so, is 0.8 Kelvin. Third: since the Physical Society claim it has become warmer, why is everything better than before? Fo[u]rth: the maximum average temperature ever measured was in 1998, 17 years ago. When will we stop wasting money on alternative energy?

Dr. Giaever’s tour of reality is inspiring. Don’t you hope you’re doing this well at eighty-five??

Below the fold is information from his Wiki page, including his Norwegian roots:

Ivar Giaever […] born April 5, 1929 is a Norwegian-American physicist who shared the Nobel Prize in Physics in 1973 with Leo Esaki and Brian Josephson “for their discoveries regarding tunnelling phenomena in solids”. Giaever’s share of the prize was specifically for his “experimental discoveries regarding tunnelling phenomena in superconductors”. Giaever is an institute professor emeritus at the Rensselaer Polytechnic Institute, a professor-at-large at the University of Oslo, and the president of Applied Biophysics.

Giaever has said man-made global warming is a “new religion.”

In the minority report released by the U.S. Senate Environment and Public Works Committee in March 2009, Giaever said, “I am a skeptic…Global warming has become a new religion.”

In a featured story in Norway’s largest newspaper, Aftenposten, 26 June 2011, Giaever stated, “It is amazing how stable temperature has been over the last 150 years.”

As part of the 62nd Lindau Nobel Laureate Meeting, Giaever referred to agreement with the evidence of climate change as a “religion” and commented on the significance of the apparent rise in temperature when he stated, “What does it mean that the temperature has gone up 0.8 degrees [Kelvin/Celsius]? Probably nothing.” Referring to the selection of evidence in his presentation, Giaever stated “I pick and choose when I give this talk just the way the previous speaker (Mario Molina) picked and chose when he gave his talk.” Giaever concluded his presentation with a pronouncement: “Is climate change pseudoscience? If I’m going to answer the question, the answer is: absolutely.”

You may have noticed in the video Dr. Giaever’s recommended reading. Here’s the book he thinks would provide a corrective to the current gloom-and-doom zeitgeist:

One of Amazon’s editorial reviews says about the book:[with my emphases — D]

Ideas have sex, in Ridley’s schema; they follow a process of natural selection of their own, and as long as they continue to do so, there is reason to retire apocalyptic pessimism about the future of our species.

Erstwhile zoologist, conservationist, and journalist, Ridley (“The Red Queen”) posits that as long as civilization engages in exchange and specialization, we will be able to reinvent ourselves and responsibly use earthly resources ad infinitum. Humanity’s collective intelligence will save the day, just as it has over the centuries. Ridley puts current perceptions about violence, wealth, and the environment into historical perspective, reaching back thousands of years to advocate global free trade, smaller government, and the use of fossil fuels. He confidently takes on the experts, from modern sociologists who fret over the current level of violence in the world to environmentalists who disdain genetically modified crops. An ambitious and sunny paean to human ingenuity, this is an argument for why ambitious optimism is morally mandatory.

“Ambitious optimism” is morally mandatory? He could probably talk me into that proposition but GMO foods? Not so much. I don’t think we have enough information about the Unintended Consequences to decide whether or not mucking about in the DNA of plant life is mostly benign. It is the same principle as the one backing the idea of avoiding Consensus in any scientific endeavor: test hypotheses. Test them again and again.

Whatever. Both these men are telling us that the world is getting better. If it weren’t for the regressively incessant perturbations of bloody Islam, I’d agree. But I do wonder what either of them would have to say about this 1400 year-old scourge, currently waxing instead of waning. The present danger is due to the need for fossil fuels combined with the machinations of world leaders to operate from a sense of scarcity. The latter are, for the most part, delusional leftists who see their welfare state economics as the perfect snare. Again, the true believers in socialism as a solution are truly delusional — e.g., our own Bernie Sanders. As so many of them, he’s never held a real job in his life. He, and the rest, fail to take human failings seriously. What they insist on seeing as a fixable bug is actually an inherent feature of the human condition. That’s why we must always trust AND verify. That’s the Realist Two-Step: the Dance of Authentic Reality with a twirl of compassion.

The current wide-spread push-back against the sharp edges of this nightmare delusion is only just beginning. I remain optimistic that it will prevail. Just as it took a long time for Soviet Russia to implode, so will the western version of socialism come to be seen as ultimately empty promises. Utopias can never exist, nor should they. When we seek to “improve things” it is far safer to limit the application of solutions strictly to local problems. That way we can correct more easily when unforeseen problems arise.

Meanwhile in the short term, as another commenter is fond of saying, “lock and load”. Yes, his exhortation makes me cringe a bit, but for the moment it’s the sanest suggestion… for those who have weapons.

Robert Hunter, a principal lyricist for the Grateful Dead, put it another way in his song One Thing To Try:

Take care of your people, get some of them fed
Hide the ones in trouble out under your bed
Keep an eye to the future, an ear to the past
After thinking it over, notice nothing much lasts

Don’t ever let it get the best of you
Plan what you can, and let the rest shine through
Just so many angles you can possibly see
Figure on those, let the other ones be

Don’t be out collecting more than you need
Got a lot of things growing but keep watching those seeds
Got to share in December what you planted in May
If the harvest is empty, find some other good way

27 thoughts on “A Nobel Laureate’s Views on Global Warming”