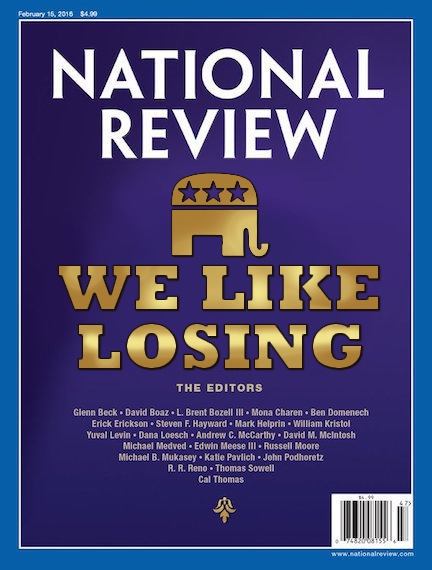 In this new video Bill Whittle points out the danger we face as a country. He doesn’t say so, but it is the same problem many other Western countries face: we have a deep incompetence of leaders across the political spectrum.

This is the first example I’ve seen of a commentator who refused to sink into the mud of invective and name-calling. Thank God there is one remaining.

Otherwise, the utterances of soi-disant “Conservative” talking heads regarding Donald Trump are sickening. Literally so. Diana West published an abecedary of samples of invective that these self-important luminaries have used in their frantic attempt to push back against the rising tide of Trump supporters.

Diana’s list gets about half-way through the alphabet, but she terms it “a work in progress”. Had I the stomach for the job, I’d help dig up some of the letters further down the alphabet, but it’s too dispiriting to watch them move to the dark side once again, as they did with Diana, in their efforts to bring down someone who scares them. Her list so far makes all too clear the sad fact that they’ve again abandoned a fundamental principle of conservatism, i.e., no matter what the provocation, vile invective has no has a place in Conservative rhetoric:

The fun part about The Big Conservative Dictionary of Donald Trump is that it is brought to you by those erudite conservatives who, some even between birthing the stink bombs below, endlessly deplore crudeness and “tone” in simply scads of elevating sermons and television lecture-bytes. (See “Rudeness Is not a Conservative Value,” “Against Trump,” etc.)

Then comes the first clod of dirt, this one in a Tweet by one Rick Wilson, a GOP consultant and erstwhile talking head on cable news. He is directing this odious call-out to Anne Coulter. The whole of the Tweet reads:

Erudite fellow, eh? That scatological insult — sans a whit of real criticism — was right at the level of emails we used to get from Swedish professors during the Breivik aftermath. I never thought to ever see this level of crudity displayed by a purported Conservative in this country.

[Because it works so well in American language usage, from now on let’s just call each of these lads who betray their principles in support of a good cause — because they’ve accepted the Marxist rule about what is justified by ends — let’s say each is a “purported Conservative”, or pC for short.]

A is for Ape

— This is the headline for National Review’s very first report by Kevin Williamson on Donald Trump’s 2016 presidential run — almost brings a tear to the eye. ([for more Williamson] See also “P is for Plastic-Surgery-Nightmare Wife,” etc.)

“Turning to Donald Trump to solve the problems in Washington is like turning to an ape to fix a broken refrigerator.”

A is for Appalling

In other words, jump on the anti-Trump bandwagon if you want to remain a pC in good standing with these boys.

Diana has more of the same on her post. But it’s so mean-spirited and much of it so scatological, that I can’t bring myself to show you what will live on in history as the shame of those pC fright boys.

Diana doesn’t say so, but it’s the exact strategy those pC pokeys used in their (failed) attempt to bring her down for daring to fault their hero, FDR. Among many other things she was called “a right-wing loopy” who had not yet been “house-trained”.

The message was clear: don’t color outside the lines they’ve drawn or they’ll do everything in their power to befoul you and your message.

That’s the moral low ground now claimed by people whose first allegiance is no longer to their principles but to their “heroes”. What used to be the first principle of American Conservatism has been so thoroughly traduced they’ve passed any hope of return. This point of honor among the pC has been broken off at the hilt as they continue their stabbing of Donald Trump. Now we know the real deal: when they are threatened the gloves come off; their barroom brawl tactics come into play against those they presume to be their inferiors. These inferiors are anyone outside the Beltway Establishment. And once again that implied inferiority of those who don’t agree is also a violation of pC rules. 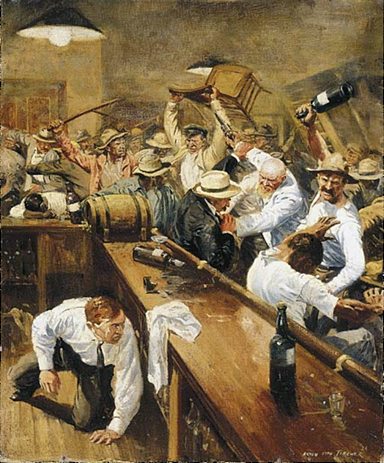 In sum, the bedrock of Conservatism is/was a firm belief in rules about speech and conduct, and a presumption that all of us are equal. That even when we differed on content, we all agreed on process, and that process was of necessity a civil, courteous one. This foundation is being jack-hammered with a vengeance — so much so that I’ve stopped reading many of these people whose opinion I formerly respected. They no longer keep Reason at the forefront of their rhetoric. Instead they seem to have been reduced to a scrambling anxiety, attempting to one-up (or one-down) each other as they fling mud balls at Donald Trump. That’s how scared they are; they’ve been reduced to sounding like Leftists in their rush to Trample Trump.

This election cycle is beyond sad. No matter who wins, the body on the stage in Act Five is American Conservatism. The cause of death? Suicide by foul-mouthed invective. Come to think of it, that’s how American Liberalism began to die, too.

45 thoughts on “A Gaggle of Geese, An Incompetence of Leaders”