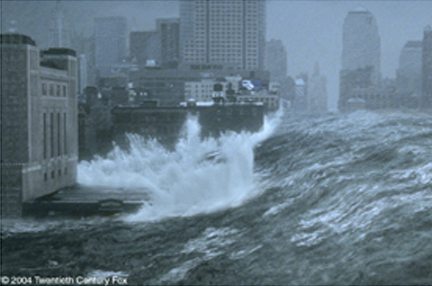 The following piece by Henryk Broder from last month’s Die Welt examines the climate activism of various German celebrities in the run-up to the COP21 conference in Paris. Many thanks to JLH for the translation:

When B-List Celebs Invoke the End of the World

German actors are calling in a video for participation in the climate demonstration in Berlin. Celebs from Wolff’s Precinct, Sunny to Deadly and Scene of the Crime act concerned. Is this supposed to be satire?

We hear from actor Jürgen Heinrich, known from the series Wolff’s Precinct: “Climate change — I know that should interest me. I should do something. The right thing.” He hands it over to his colleague, Tobias Schenke, alias Dr. Leo Sturm, medical examiner in the ARD early evening series, Sunny to Deadly, The X Files: “But the earth is big. Damned lot of people. Where to begin?”

And that is also being asked by Jeannette Hain, most recently Hallorvorden’s daughter-in-law in Til Schweiger’s tragicomedy, Honey in the Head: “Whatever I do, it is just a drop on a hot stone.” Maria Ehrich, Princess Anneline in the film version of The Little Mermaid, is also hovering on the edge of despair: “And everything is getting warmer. The icebergs are melting and I pull my blanket over my head and act as if it were only about the polar bears and not about us.” What an error!

Julia Hartmann, single mother in Why I Kidnapped My Boss, tells us what it is about: “The number two. Two degrees.” Andreas Hoppe, inspector on Scene of the Crime, beside Ulrike Folkerts, takes up the thread: “That is the maximum temperature rise we can manage. Anything over two degrees and the catastrophes will be unstoppable.”

Known as an attractive hostage

Jennifer Ulrich, fondly remembered by many TV viewers as the attractive hostage in a sequel of the series Alarm for Cobra 11, ventures a prediction: “We will see waves of refugees — compared to them, the present refugee numbers are a joke.” “But not only that,” continues Tobias Schenke, “Cities will go under, cities like Hamburg, London and New York will sink into the sea.” And now Loretta Stern of Soko Leipzig[1] is allowed a sentence: “It’s not just about polar bears anymore!”

“It’s about all of us,” cries Andreas Hoppe. That is, we all have to stand in the way of types who stop at nothing to get rich. “They dig, they drill, they frack through the entire planet for money,” laments Jürgen Heinrich. Andreas Hoppe can wait no longer” “It’s time for us to stop them!” For: “We want to live on this planet. We have nowhere else to go. This is our home,” confides Jennifer Urich.

What you have just read is not a scene from the “today show” on ZDF. It is a three-minute-long clip in which “known actors” call for participation in the “climate demo” in Berlin in November. One day later, the UN climate conference begins in Paris. In Berlin, as in Paris, it is about bare survival. Hamburg, London and New York must not sink into the sea. Dinslaken[2] either. Let us counter that. Let us stop breathing, heating our homes, drilling for oil. Let us rather watch Special Commission End of the World in its efforts.