Of the member states of the European Union, the nations of the former East Bloc are the most sensible and politically incorrect on the topic of immigration. And this is true of those nations that were not even nations, but Soviet Socialist Republics, from 1940 to 1991 — Estonia, Latvia, and Lithuania, among others.

The following article from Tages-Anzeiger features a Latvian theater director who doesn’t subscribe to the PC zeitgeist concerning the open-borders attitudes of Western Europeans. The German variant is known as Willkommenskultur, whose detractors use the word to mean, roughly, “bleeding-heart liberal migrant-loving madness”.

Many thanks to Nash Montana for the translation. The translator includes this note:

Apparently Alvis Hermanis’ letter to the Tages-Anzeiger has made waves. He is now being accused of being a racist bigot. Arif Pirincci knows all about that.

“Do You Believe That 40 Million Polish Citizens are Neo-Nazis?”

The Latvian theater director Alvis Hermanis doesn’t want to produce in Hamburg — as a protest against the German Willkommenskultur.

Quite a few German theaters are strongly engaged for the refugees. The Deutsch Schauspielhaus in Hamburg, for instance, made room for the housing of sixty refugees. And the Thalia theatre rearranged their repertoire and created a “refugee café”; recently a few young refugees were given the opportunity to speak in the piece “Ankommen” (Arriving). At the start of the season, the Thalia called on people to donate. “Theatre is a social space. Artistic work is born from the social. That is why so many different activities go hand in hand here,” Joachim Lux, the director, said recently. “Through big, common themes we can create a sort of insight […], the theatre is part of all of this.” 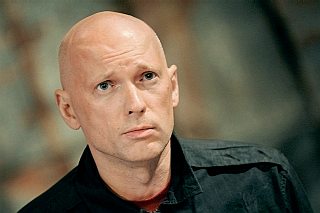 Alvis Hermanis, Latvian director, cancelled his theater project “Russia. Endgames” at the Thalia theatre. He wrote up his reasons for tagesanzeiger.ch/Newsnet. It shows how even among artists there is a divergence of viewpoints on the refugee situation and how it is being handled. His explanation is as follows:

“I asked to cancel my production in Hamburg for very private reasons. I am working in Paris at the moment, and I live in the area where one of the massacres took place. Daily life here is like living in Israel. Permanent paranoia. What makes it worse is that members of the Jewish community of Paris are the first ones who leave our city. We are surrounded by threats and by fear. We have all been traumatized by what happened three weeks ago. I am the father of seven children, and I am not ready, to work in yet another potentially dangerous city. As we already know by the way, some of the people that participated on 9/11 came from Hamburg. We know that even the German government changed their refugee policy after the tragedy in Paris. And we now see the price to be paid, to finally see the admission of the connection between immigration politics and terrorism, which cost the lives of 132 young people in Paris. Does Germany still subscribe to the taboo that immigration politics and terrorism cannot be connected with each other? After I spoke to people from the Thalia theatre, I understood that they are not open for divergent opinions. They identify with this Willkommenskultur for refugees. Yes, I do not want to be a part of that. Am I allowed to make my own choices, to have my own opinion? What about democracy? I do not believe that my political views are more radical than the opinions of the majority of Europeans. We do not support this enthusiasm to open up all of the EU borders for uncontrolled immigration. And especially in Eastern Europe we don’t understand this euphoria. Do you really believe that for example, forty million Polish citizens are Neo-Nazis?”

32 thoughts on ““We Are Surrounded by Threats and by Fear””