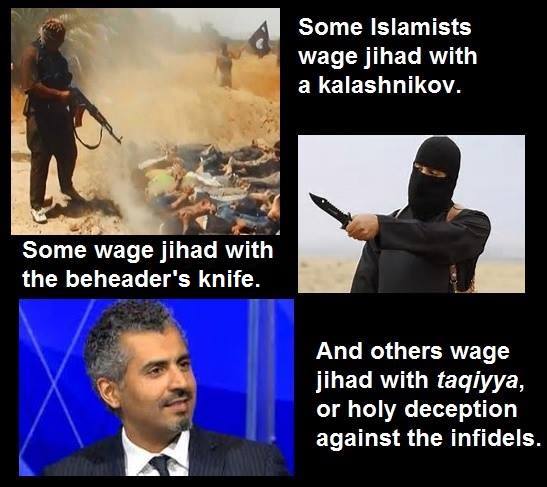 This picture ties in with a discussion thread that took place in the comments on the same post. A commenter named Oren made these remarks:

Nawaz appears, at least to the average listener, as a genuine moderate Muslim, a very rare creature indeed. Whether his intentions are truly pure or not is irrelevant, because he is currently serving as a secular, reformed Islamic role model. If he is able to convince the anti-Jihad movement, then he is probably able to do the same for all the young Muslims out there.

I don’t know why anyone would think that the “anti-Jihad movement” is as hard to convince as “young Muslims” about where Mr. Nawaz’ true loyalty lies. I’m certain it’s clear to all Muslims who pay close attention to his words — especially those in the Hizb ut-Tahrir milieu from which he sprang — exactly what he is doing to further the cause of Islam.

This was my reply in the same thread:

I wish I could spend the time answering this comment in depth. However, I will say this:

Your words define the exact strategy that Nawaz and similar “moderates” want to promote.

I think the same process is going on in a lot of places. There must be hundreds of deep-cover Ikhwan operatives in these non-profit organizations, feeding sincere well-meaning people exactly what they want to hear about Islam. It makes those good-hearted folks feel so relieved — it gives them hope that a modern, civilized society that includes Islam can somehow be salvaged.

But it can’t. Despite all the hard work and millions of non-profit dollars that have gone into promoting “moderate” Islam over the past fifteen years, there is nothing to show for it. There is no sign that any of it will bear any fruit.

All this diversionary tactic has done is to keep the Western public in a hypnotic trance wherein they continuously mutter “moderate Islam… radical Islam… tiny minority of extremists… the need for an Islamic Reformation…” etc. This gives the Islamic State — the longed-for Caliphate — the time it needs to grow into a coherent, implacable manifestation of the will of the Ummah.

By the time Westerners throw off the post-hypnotic commands and wake up to what is happening to them, it will be too late. The enemy will have metastasized to the point where there is no choice but full civilizational war, with all the horrors that entails — mass-casualty terrorism, heaps of rotting corpses in the streets, the destruction of parts of major Western cities, and so on. Millions of deaths, economies destroyed, whole nations turned into wastelands. Just like North Africa circa 660 A.D.

Ten years ago I might have embraced your words. But I have learned a lot since then and been hardened by bitter events.

You may well be a taqiyya artist just like Maajid Nawaz. Or you may have just been fooled by his ilk. It doesn’t really matter; the end result is the same.

To expand on these thoughts just a little, let’s consider the long-term consequences of this desperate longing for “moderate” Muslims.

Many Westerners, both inside and outside of the Counterjihad, want to believe that somewhere out there are hundreds of millions of Muslims who are deep-down just like us. These good folks just need to be released into the sunshine of a modern secular democracy, and somehow lured out of their thrall to the imams and mullahs, and then “radical” Islam will no longer be the menacing force that it is today. 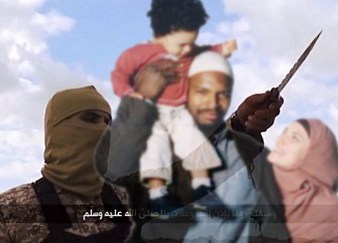 It was this earnest hope that led George W. Bush to invade Afghanistan and Iraq. Yet the dismal failure of those two enterprises — which cost thousands of American lives, generated millions of refugees, and emptied the U.S. Treasury of untold billions of dollars — has not deterred well-meaning optimists who want to empower “moderate” Islam. They’re ready to throw good money after bad, invade more Third-World pestholes, spend more blood and treasure, and generate tens of millions more refugees. All in hope that Islam can somehow be modernized and civilized and made to resemble Western culture.

Why do they persist in such madness? What feeds this seemingly bottomless appetite for self-delusion?

Part of the explanation must lie in an unwillingness to contemplate the possibility that more than a billion people, a sixth of the world’s population and an entire pseudo-civilization, is implacably hostile towards us, its would-be benefactors. That there is a persistent political ideology behind this hostility, one that is strengthening and not diminishing. That Islam already is experiencing a Reformation, which is the cause of all the increasing intensity and zeal for converting, enslaving, or killing all infidels.

Normal people don’t want to contemplate this possibility because they don’t want to face the implied consequences. If 1.6 billion people (or whatever the OIC says the current number is) want to make war on the rest of us, what kind of world are we facing? What sort of heritage will be leaving for our children and grandchildren?

Better to search high and low for that mythical beast, the Moderate Muslim. Ah, just wait until we find him! Then we can welcome him into our house, enlist him in the cause, and with his help build a bright shining future for everyone.

I must admit that ten years ago I was willing to accept the possibility of such an outcome. I, too, was unable to face the horrible consequences of a civilizational war of that magnitude.

But about five years later I abandoned hope of any meaningful encounter with “moderate” Islam, if such a thing is even possible. Irshad Manji, Zuhdi Jasser, and Tarek Fatah will be ground under the tank treads of the Islamic juggernaut, just like the rest of us.

In the five years since I reluctantly faced up to that reality, “radical” Islam has strengthened by at least an order of magnitude, despite all the airstrikes and electronic surveillance and naked scanners in airports. It is not deterred by our puny efforts, and is currently gathering support from millions of Muslims who recognize a strong horse when they see one.

This is what the efforts of people like Maajid Nawaz and Imam Rauf have enabled. Their task is to pull the wool over the eyes of the wealthy, well-meaning movers and shakers at the highest levels of society in Western countries. At the governmental level their suave-tongued misdirection helps divert billions of dollars into bombing a phantoms in the desert. At the NGO level it induces organizations to expend most of their resources on “partnering” with “moderates” to create a form of Islam whose existence has never even been demonstrated.

It’s a delusion, but an understandable one, given the awful alternative — which is Reality.

This is why people like Vlad and me are on short rations while devotees of “moderate Islam” rake in millions in foundation money. The well-meaning, decent people who control the financial spigots of philanthropic organizations want to feel good about themselves just like everyone else, and contemplating the bloody future that lies ahead doesn’t make anybody feel good. Better a pretty lie than the miserable, ghastly truth.

Maajid Nawaz and his deep-cover colleagues have bought the Ummah a decade of breathing space (so far). Thanks to them, the Khalifa has had time to establish itself. Mujahideen are scattered throughout the West, waiting for the signal to initiate carnage in our cities. The wombs of the faithful are giving birth to new Muslims every day, from Jakarta to Tenerife, from Berlin to Hamtramck. And all paid for by the infidel.

That’s what the “secular, reformed Islamic role model” has done for Western Civilization.

Would I like to see more of the same? No, thanks.

47 thoughts on “Stalking the Mythical “Moderate””