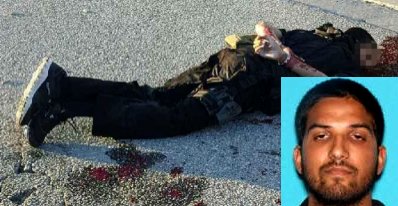 Syed Rizwan Farook, the mujahid of San Bernardino, was a “violent extremist” who had been “radicalized”. His daddy, however is a moderate. The elder Farook did not approve of his son’s religious fundamentalism.

At least that’s the story the media have been telling us. Based on an interview in today’s edition of the Italian newspaper La Stampa, however, Papa Jihad’s ideological stance is somewhat more nuanced. Breitbart has the translation of what the father said:

My son said that he shared [IS leader Abu Bakr] Al Baghdadi’s ideology and supported the creation of the Islamic State. He was also obsessed with Israel.

I told him he had to stay calm and be patient because in two years Israel will not exist anymore. Geopolitics is changing: Russia, China and America don’t want Jews there any more. They are going to bring the Jews back to Ukraine. What is the point of fighting? We have already done it and we lost. Israel is not to be fought with weapons, but with politics. But he did not listen to me, he was obsessed.

Asked if he knew whether Syed Rizwan Farook had contacts with terrorist organizations, the father replied, “I do not know. But these days, who knows, with the internet and all that technology.”

US correspondent Paolo Mastrolilli inquired whether Farook believes his son may have been radicalized by his 29-year-old wife, Tashfeen Malik. “Maybe, I do not know,” he replied.

Hmm… A political solution to the problem of the Zionist Entity, in which all the Jews will be moved from Israel to Ukraine. Yep, that’s bound to work.

All kidding aside, however — as Breitbart points out, Farook Senior is simply stating the general position of the Muslim Brotherhood: victory over the infidel will be achieved in stages by political means, with no violence necessary until the last “milestone”.

From the media point of view, the “radical” is the masked mujahid standing in the desert with a bloody knife and a severed head, while all the rest are “moderates”.

33 thoughts on “Papa Farook is a Moderate Muslim”