Every year on Human Rights Day (December 10) there is a march in Vienna against the persecution of Christians. Elisabeth Sabaditsch-Wolff attended last week’s event, and sends the following report. 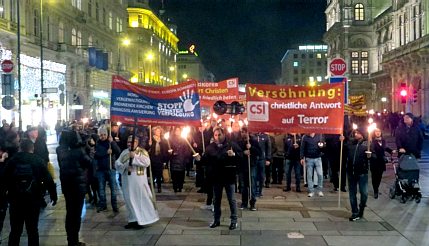 Lighting Torches for the Forgotten Persecuted Christians
by Elisabeth Sabaditsch-Wolff

Every year on December 10 — commemorating the signing of the UN Declaration of Universal Human Rights — hundreds of Christians gather in front of the word-famous Vienna Opera for the purpose of forcing awareness of this persecution millions of Christians worldwide into the public consciousness. This year around 600 men, women and children took time from their busy pre-Christmas schedules and sent a strong signal to the thousands of busy and bustling Christmas shoppers on Vienna’s famous shopping street, Kärntner Strasse, carrying torch lights and banners.

Notably absent was Archbishop Cardinal Christoph Schönborn, who predictably decided that sending a strong signal to persecuted Christians in Islamic countries and North Korea did not fit into his filled-to-capacity Advent schedule. He did, however, find the time to attend a concert for “refugees” in St. Stephen’s Cathedral. I spoke to a couple from Texas who attended the march for the first time and who told me they had expected the cardinal to head the procession. They were visibly disappointed when I told them the cardinal had never attended and would in the future refrain from attending the march. Nevertheless, they expressed interest in organizing a similar event in Houston. 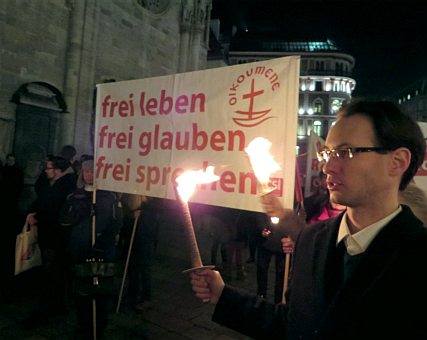 Also missing were the many hundreds of Oriental Christians, i.e. Syrian-Orthodox and Coptic Christians. Neither lay people nor clergy showed up to show their interest in marching for their fellow brothers and sisters in the Middle East. Shameful!

As is the case every year, the march was lined with stressed-out shoppers who paused to acknowledge the procession. Sadly, hatred of Christians was expressed by passersby using relevant vocabulary. On the other hand, kindness was displayed by a shop assistant, who handed out a bottle of water free of charge after one of the marchers had his eye burned by speck of torchlight fire. Furthermore, there were reports of some passersby who spontaneously wept at the sight of so many people demonstrating their love and support for those Christians suffering at the hands of fellow human beings. 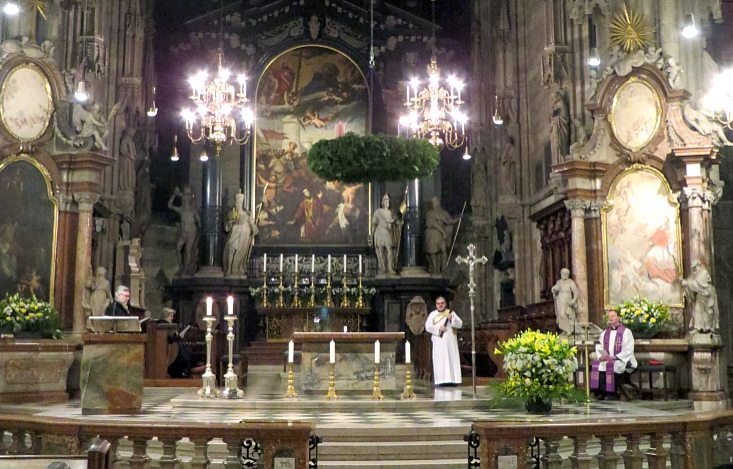 The march culminated in an ecumenical religious service in St. Stephen’s Cathedral.

8 thoughts on “Lighting Torches for the Forgotten Persecuted Christians”