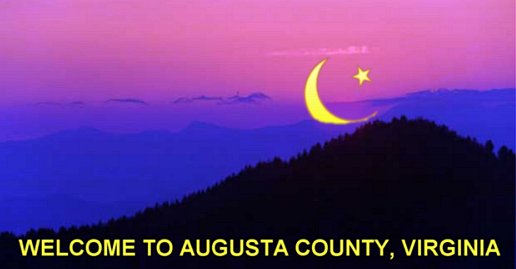 As we reported last night, our neighbors over in Augusta County made national headlines when their “Islamophobia” caused the closure of the county’s schools. The parent of a student assigned to copy out the shahada complained, and the controversy went viral on social media. The resulting uproar caused the school board to shut down all the schools in the district yesterday, “out of an abundance of caution.”

The superintendent didn’t say what he was being “cautious” about, but you can bet the recent events in San Bernardino and Paris were in the forefront of his mind. Even a provincial school official must have noticed by now what angry Muslims tend to do when non-Muslims say or do things they find insulting to their religion.

To put the incident in perspective, consider what the equivalent assignment might have been if the topic had been Christianity. A rough equivalent would have been to copy out John 3:16 as presented in the King James Bible:

For God so loved the world, that he gave his only begotten Son, that whosoever believeth in him should not perish, but have everlasting life.

Or possibly the first of the Ten Commandments (Exodus 20:3):

Thou shalt have no other gods before Me.

To be strictly analogous, the first would have to be copied out in Koine Greek, and the second in Hebrew.

Can you imagine a public school in the United States handing out such an assignment in the year of Our Lord 2015? It would end the career of the teacher, and possibly those of the principal and the district superintendent as well. 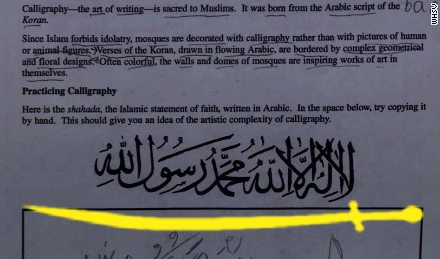 So how did the shahada come to be in the curriculum of an Augusta County high school? Before we look into that question, let’s recap the past week’s events. From Newsplex:

AUGUSTA COUNTY, VA (WHSV) — The mother of a Riverheads High School student says she felt her rights as a parent had been violated when her ninth grade son came home with a homework assignment last week that involved the Islamic Shahada, or statement of faith.

Kimberly Herndon said the assignment asked him to copy the Shahada, which translates to, “there is no god but Allah, and Muhammad is the messenger of Allah.”

The assignment says it is meant to give the students “an idea of the artistic complexity of calligraphy.”

However, Herndon said she felt the assignment tried to indoctrinate her child into the Islamic religion.

“There was no trying about it. The sheet that [the teacher] gave out was pure indoctrination in its origin,” said Herndon.

Augusta County Schools Superintendent Dr. Eric Bond said, “Neither these lessons, nor any other lesson in the world geography course, are an attempt at indoctrination to Islam or any other religion, or a request for students to renounce their own faith or profess any belief.”

He went on to say the lesson “attempts objectively to present world religions in a way that is interesting and interactive for students.”

On Tuesday night, dozens of people met at Good News Ministries to voice their own opinion. Herndon has not sent her child back to school since the incident happened last week.

“I will not have my children sit under a woman who indoctrinates them with the Islam religion when I am a Christian, and I’m going to stand behind Christ,” said Herndon.

Meanwhile, the school maintains the lesson is consistent with the Standards of Learning in Virginia.

A Dec. 11 social media post Herndon made has been shared hundreds of times.

In her post, she wrote, “I am preparing to confront the county on this issue of the Muslim indoctrination taking place here in an Augusta County school. This evil has been cloaked in the form of multiculturalism.”

Below is a statement from the Augusta County Schools district regarding the closure:

Augusta County Schools and all administrative offices will be closed Friday, December 17, 2015.

Following parental objections to the World Geography curriculum and ensuing related media coverage, the school division began receiving voluminous phone calls and electronic mail locally and from outside the area. As a result of those communications, the Sheriff’s Office and the school division coordinated to increase police presence at Augusta County schools and to monitor those communications. The communications have significantly increased in volume today and based on concerns regarding the tone and content of those communications, Sheriff Fisher and Dr. Bond mutually decided schools and school offices will be closed on Friday, December 18, 2015. While there has been no specific threat of harm to students, schools and school offices will be closed Friday, December 18, 2015. All extra-curricular activities are likewise cancelled for tonight, Thursday, December 17, through the weekend. We regret having to take this action, but we are doing so based on the recommendations of law enforcement and the Augusta County School Board out of an abundance of caution.

Finally, the Augusta County School Board and Dr. Bond appreciate parents bringing concerns directly to our attention, and a constructive and respectful dialogue between school and community is always welcome. As we have emphasized, no lesson was designed to promote a religious viewpoint or change any student’s religious belief. Although students will continue to learn about world religions as required by the state Board of Education and the Commonwealth’s Standards of Learning, a different, non-religious sample of Arabic calligraphy will be used in the future.

Dymphna did a little digging into the story last night. One person on Facebook said:

I along with another parent whose child was directly involved with the incident that took place at Riverheads High school met with school officials today at 3:45. The school was forthright in admitting that the teacher made a mistake in assigning the children to copy the shahada which is the Islamic creed that indoctrinates one into the Muslim belief. Also, it was admitted that asking the students to put on the head dressing of the Islamic woman was a bad choice in that there was no representation of any other apparel of any other culture or religion. We have been approached by a local news station to present this story to the citizens of this community who we strongly believe have the absolute right to be presented with the facts of the events that have taken place and what consequences have taken place as a result of the mistakes that have been made.

And Dymphna summarizes more of the information from social media thus:

Kimberly Herndon, the parent who initiated the pushback against this “geography assignment” spoke out in a forum held by the Augusta County Schools to address parents’ concerns regarding the shahada assignment. She noted that the Christian religion is a strong presence in the community (it includes a large number of Mennonites) and also addressed the fact that while children are given the shahada to write, no mention of one’s adherence to Christianity is allowed. She said: “If my truth cannot be spoken in schools, I don’t want false doctrine spoken in schools.”

There is no large Muslim presence in Augusta County. The wiki doesn’t give a sectarian breakdown of the county, but at the last census “The racial makeup of the county was 95.02% White, 3.60% Black or African American, 0.15% Native American, 0.28% Asian, 0.02% Pacific Islander, 0.32% from other races, and 0.61% from two or more races.” Not many of those blacks or whites are Muslims, which would mean the Islamic presence must be well under 1.4% of the population. Negligible, in fact.

So it seems unlikely that the assignment handed out by the teacher was being pushed on her by a local Islamic advocacy group. Where did it come from, then?

I browsed through the Commonwealth’s Standards of Learning for history and the social sciences to see what might be found. The 2008 standards are currently in force, but the new standards will be finalized soon. Both of them use the same wording when describing what fully-educated Virginia students must know about Islam:

Nothing in there about Islamic calligraphy. Nothing about teaching students to copy out the shahada or wear the veil.

It’s hard to imagine that the unfortunate teacher devised the assignment herself. It was almost certainly handed to her as part of a package of teaching materials sent out by the state education bureaucracy in Richmond.

And where did the Commonwealth get the materials? The trail grows murky here — there’s no obvious pipeline from the federal education bureaucracy to its local Virginia counterpart. According to the state DOE, Virginia receives federal educational assistance under the No Child Left Behind Act of 2001, but it doesn’t give any details. And although it says Virginia declined the Common Core standards of 2010, at another place it says that the state is in “alignment” with them in some unspecified way.

My bet is that a lot of materials used in school curricula are sent out by the Department of Education in Washington and distributed to school districts by the Commonwealth of Virginia. If that is the case, you can be certain that the Muslim Brotherhood had a hand in the composition of all the content relating to Islam. Agents of the Ikhwan have tunneled through all levels of the federal government like termites in a stump, and they would consider this sort of material — which is actually dawa, “the call”, Islamic proselytizing — well within the scope of their remit.

46 thoughts on “How Did the Shahada Come to Augusta County?”