Update: Due to some sort of file error, the last portion of MC’s essay was missing from the source document I used. The complete text has now been restored below.

Rounding off a series that included Human Sacrifice and Blasphemy, our Israeli correspondent MC tackles the notion of Heresy as it is understood in a West dominated by uniform Leftist politics. 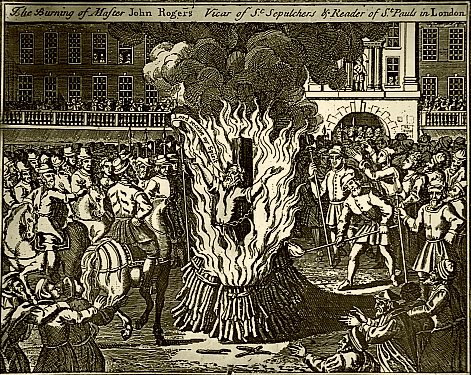 ‘Left’ and ‘right’ are not good terms for the description of political flavor. The right essentially no longer exists; it is almost always referred to as ‘far right’ a term which was originally coined to describe the National Socialist (Nazi) party by the left. The left won the ‘culture battle’ and positioned themselves at the peak of the moral high ground (as defined by themselves) and thus destroyed the right.

So we have a situation where socialism = ‘good’ and conservatism = ‘far right’ = bad.

Thus there is no right. Collectivism, either in the form of Socialism or National Socialism, is the only choice allowed, and this has been the case since World War Two (with notable exceptions).

With the advent of the universal franchise (one person one vote), government became a matter of fashion rather than informed choice. Given the universal appeal of television, leftist virtual signaling became a necessary feature in programming aimed at the TV-watching classes. To be credible, one had to keep the PC rules — heresy was (and still is) simply not acceptable.

Heresy is deviation from dogma, usually religious dogma. In the past it often carried a death sentence, specifically burning at the stake or some other equally cruel and barbaric ritual slaughter. This is particularly true of Islam, and now we see videos of religious executions for the crime of heresy every bit as barbaric as those of history.

But heresy can also be a deviation from political doctrine, and the execution of Trotsky by an ice axe in the brain was a particularly brutal example of the premeditated act of extreme cruelty as a punishment for political heresy. And yes, whilst Stalin was probably afflicted with an extreme form of paranoia, few of his worldwide sycophants stopped to think through the implications of this act, and of how a nut case such as Stalin was able to gain absolute power….

Or was it Mao, or Hitler, or Pol Pot or Ho Chi Minh?

Heresy can only exist in a particular vacuum of ideas. In a zone where free speech exists, heresy is of no consequence, but for heresy to be a punishable crime the heretic must have rejected a doctrine that has been forced upon him/her by some ‘superior’ entity.

This essay is heresy, and there are those who would happily take away my credibility and livelihood (if I had one) in order to punish me and to shut up others who might follow my example.

To have to punish a victim for heresy means that one’s own case is weak and has no credible standing, so we resort to physical and emotional bullying to defend that standing. When we build our house on sand, we have to build sea walls and wind breaks to protect it.

The force of truth is irresistible in the long run, but can be staved off in the short term using a bastion of lies. However, the lie must always be defended, whilst truth needs no defense. It just is.

To defend Political Correctness is to also define a heresy, and the political left has built a huge castle of lies which must be defended against the inevitable at great cost in time and energy. Enormous resources are put into defending PC, but truth still seeps through, enough truth to fill a blog page or two.

The problem of defining a heresy is that each lie promulgated that has to be thus defended, and is corrosive to society. A society built on lies, is, by definition, a flimsy society full of inconsistencies, and in which trade and the consequential generation of wealth can no longer prosper.

It is the increase in prosperity due to honest trade upon which Western culture and civilization are built, and the foundation of that is a search for truth. If truth becomes heresy, the overall prosperity declines because the bad guys can syphon off any surplus and the trickle-down effect is lost. So society polarizes into feudalism.

The search for truth can only happen in a society in which heresy is tolerated. Heresy can mean criticism and change, and to those for whom change is threatening, heresy is thus a fearsome thing.

At the root of all PC is a fear, a phobia of change, where deviation from the PC norm must be crushed, or drowned at birth by howls of disapprobation, and solid platform denial.

PC is the name we give to a controlled dialogue, and to contravene the rule of PC is to commit heresy.

The Oren dialogue in these pages has been very interesting. Here we see the evolution of a dialogue of ‘moderation’ slogging it out with a dialogue of ‘extremism’. Moderation means that a dialogue is PC-compliant, in the sense that there is an elasticity about PC, so that any concept which does not threaten the core assumptions can be accommodated. Oren argues that to be acceptable, The Counterjihad movement must self-censor in order to comply with the mandates of PC, so that it is no longer heresy.

The politically correct dialogue is that ‘moderate’ Islam is a separate ring-fenced sect of Islam. Unfortunately, the ‘fence’ is a chimera — it is about two feet high and does not impede any passage at all. It is only taqiyya that makes it appear foolproof.

But Islam is just a symptom of another more significant malady; a malignant hatred of creation as we see it around us. Sufferers wish to change creation, change the very climate; they hope to bring it under human control. It is obvious to most people that that mankind did not create the universe in which we live, something else did. This is ultra-spooky to those who want humanity to be god, because it means that there is something else out there, another force, mysterious and beyond current human definition. “Immortal, Invisible God only wise”.

Who hates Yahovah’s Creation? The father of lies perhaps….

We were taught that King Canute had to demonstrate to his acolytes that he did not control the tide, and we giggled at the tale. Yet the united leaders of the nations of this planet seem to believe that they too can “bid the mighty oceans deep their own appointed limits keep” and their Lord High executioner, Ban Ki Nanki Poo, has his little list of heretics ready for the gulag.

I hope I joke.

References on heresy and related topics: