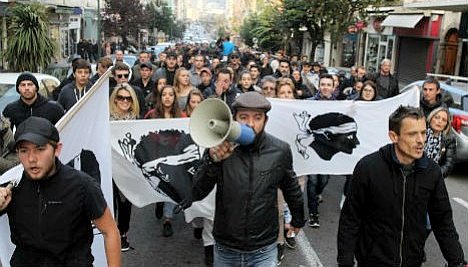 The following video reports and articles concern a situation that is very familiar to those who live in or near culturally-enriched areas of northern Europe, such as the Swedish city of Malmö. Firemen or other emergency personnel are called to an immigrant neighborhood, where they are met with a hail of stones, bricks, bottles, and fireworks. Nowadays the fire brigade in Malmö won’t enter these enriched areas without a police escort.

The same situation arose in the Corsican town of Ajaccio on Christmas Eve, when residents of a Muslim neighborhood attacked firemen responding to an emergency call. The difference between Malmö and Ajaccio, however, is that an immediate, spontaneous resistance formed and fought back against the Muslims. Perhaps there is a strong collective memory in these southern regions of centuries of Islamic occupation and oppression. In any case, a crowd of locals not only took to the streets in protest, they went into the no-go zone and trashed a mosque.

The first video is from RT. Many thanks to Anon for the translation, and to Vlad Tepes for the subtitling:

The second video is from BFMTV. Many thanks to Sassy for the translation, and to Vlad Tepes for the subtitling:

The MSM reports are notable for their equal emphasis on condemning the Corsican demonstrators at least as much as the Muslims who created the no-go zone and attacked the firemen. When quoted, all public officials above the most local levels have been careful to express their outrage about the “profanation of a Muslim place of prayer”.

Below are excerpts from articles on the violent incidents and protests in Corsica. First, from Fox News, December 25:

A crowd vandalized a Muslim prayer room in Corsica a day after an ambush left firefighters injured on the French island.

The region’s top police official was on the tense scene at a housing project Friday evening.

The violence began Thursday night, when firefighters responding to an emergency call were ambushed in Ajaccio, according to the local France 3 television. On Friday a gathering that started as a show of support for the injured emergency officials turned violent, and some in the crowd vandalized a prayer room. France 3 reported new police reinforcements at other prayer rooms.

France’s prime minister, Manuel Valls, called Friday for respect for French law after “the intolerable aggression toward firefighters and unacceptable profanation of a Muslim place of prayer.”

From The Guardian, December 26:

Muslim Prayer Room Vandalised in Corsica After Attack on Firefighters

A crowd vandalised a Muslim prayer room in Corsica a day after an ambush injured two firefighters responding to an emergency in a housing project, the state prefect on the French island has said.

Prefect Christophe Mirmand said police reinforcements from mainland France were being called into the Corsican capital of Ajaccio, and prayer rooms and mosques were being guarded.

Tensions were high on the Mediterranean island. The violence began on Thursday night, when firefighters responding to an emergency call were ambushed in a housing project in the hills of Ajaccio. It was not clear what prompted that violence.

On Friday, a gathering of about 600 people that started as a show of support for the injured emergency officials led to more violence when several dozen people broke away and headed to the prayer room. There, they threw objects and tried to burn Qur’ans and prayer books, officials said. They also vandalised a kebab shop.

France’s prime minister, Manuel Valls, called for respect for French law after “the intolerable aggression toward firefighters and unacceptable profanation of a Muslim place of prayer”.

From The Local, December 26:

Demonstrators ransacked a Muslim prayer hall and set fire to copies of the Koran on the French island of Corsica on Friday, police said, in an attack condemned by the government.

The violence came on Christmas day amid heightened security measures for the holiday, and nationwide fears after the November 13 attacks in Paris by jihadists that killed 130 people.

French Prime Minister Manuel Valls wrote on Twitter that the break-in in the city of Ajaccio was “an unacceptable desecration”.

Tensions had mounted in Ajaccio Friday after two firefighters and a police officer were injured overnight in a low-income neighbourhood of the city when they were “ambushed” by “several hooded youths”, authorities said.

From The Daily Mail, December 26:

Up to 600 French protesters desecrated a Muslim prayer hall in Corsica in a revenge attack prompted by the wounding of two firefighters and a police officer.

Chanting ‘Arabs get out!’ and ‘This is our home’, protesters marched through the streets of the French Mediterranean island’s capital, Ajaccio.

French Prime Minister Manuel Valls described the attack on Twitter as ‘an unacceptable desecration’, and branded the violence towards the firefighters as an ‘intolerable attack’.

The violence began on the night of December 24, when two firefighters were ‘ambushed’ by ‘several hooded youths’ in the low-income neighbourhood of Jardins de L’Empereur.

It escalated when several hundred people gathered in front of police headquarters in the capital city, before marching through the streets to the housing estate where the attack on the firefighters took place.

They then launched the violent assault on the local prayer room.

Interior Minister Bernard Cazaneuve insisted the perpetrators of both incidents would be tracked down and arrested, adding that there was no place for ‘racism and xenophobia’ in France.

Several hundred people marched in Corsica on Sunday after two days of violent anti-Arab riots, sidestepping a ban on demonstrations in a flashpoint neighbourhood by taking their protests elsewhere in the island capital Ajaccio.

Two people were detained over the rioting on the French Mediterranean island, which saw demonstrators vandalise a Muslim prayer hall and set fire to books including copies of the Koran.

Corsica’s administrator Christophe Mirmand announced a ban on all protests and gatherings until at least January 4 in the poor Jardins de l’Empereur housing estate, the epicentre of the violence on Thursday through Saturday.

31 thoughts on “Corsicans Strike Back Against Muslim No-Go Zones”