Prompted by yesterday’s post about Miloš Zeman, our Dutch correspondent H. Numan sends this essay on the parallels between the late Roman Empire and the twilight of the modern European Empire Union.

All Roads Lead to the Fall of the Roman Empire
by H. Numan

You all know how the Roman Empire ended up?

I’m pretty sure of that. It’s still in the curriculum. Entire libraries have been written about why it ended up as it did. However, there is a very direct good cause why the Roman Empire all of a sudden collapsed. And almost nobody knows about it. This is the mismanaged refugee crisis of the fourth century, culminating in the Battle of Adrianople.

In the year 375 AD nobody had an inkling what lay in the future. The Roman Empire had survived the tumultuous third century, in which emperors were murdered at a rate of one every few years. A series of strong emperors set the empire back on its track again. But… there were a few rumblings outside empire. Nothing to worry about, really, as only barbarians lived outside the empire. Who cares what barbarians do amongst each other? The newcomers were the Huns.

Now, to understand the situation correctly you have to know that the Roman Empire was much more multicultural than we are today. The Romans weren’t racists at all. They had a number of emperors from Spain and North Africa. It didn’t matter to them where you were born. What mattered was how you behaved. Learn Latin or Greek, good manners and dress appropriately, and you were a Roman citizen. A lot of top officers and officials were of barbarian origin.

It seemed the empire was back on track once again. But the empire by now was stretched to the very limits of what was humanly possible. It need so much military power to survive; it had changed from an empire with an army into an army with an empire. The empire was split in two: the Western empire and the Eastern (later Byzantine) empire. The most important reason for that was to shorten the line of command and to reduce (in vain) possible coups by governors.

Let me explain that: it wasn’t necessary to shorten communication lines. The Romans had an excellent mail system that rivaled the Pony Express. A message could be answered within 10-14 days. Marching an army was a different matter. Most barbarian raids occurred on the Rhine and Danube borders of the empire, so it was simply a good idea to set up the imperial HQ as close as possible to the action. The capital was where the emperor decided to live. Which was for example Trier or Aachen for the Western empire and Constantinople for the Eastern empire. By then, Rome was in effect a backwater without much importance. During the early empire the governor of Gaul had three legions. During the later empire, Gaul had five governors, each with a lot less than a legion. That was two for the price of one: five governors means five cushy positions to give away, rather than one very fat plum. And those five governors couldn’t rebel easily as they didn’t have enough troops to do it with.

The northern and northeastern borders of the western empire were the Rhine and Danube rivers. A large standing force to keep the barbarians at bay was necessary. The eastern empire had two weak frontiers: to the north the steppes of Eurasia and to the east the Sassanid empire. It had been at war, first with the Parthian and later with the Sassanid empires, since times immemorial. A large standing force to keep it at bay was necessary as well.

Standing armies cost money to maintain. A lot of money. Back in those days the economy was based on agriculture, not on money. About 95% of the entire population until the industrial revolution were farmers. When we read about history, please realize that. You’re reading or studying about what the other 5% did. The other 5% were the emperor and his court, the administration, the army, the churches, artisans, citizens and merchants. The empire’s biggest expenditure by far was on the army.

In terms of military technology, the Roman Empire (both West and East) had no advantage over Germanic tribes or the Sassanids. Their advantage lay in vastly superior logistics and organization, not in better weapons. When compared to the legions of Julius Caesar, one could say that training, equipment and (to a limited extent) organization had seriously declined. In other words: the barbarians became more Roman while the Romans became more barbarian. 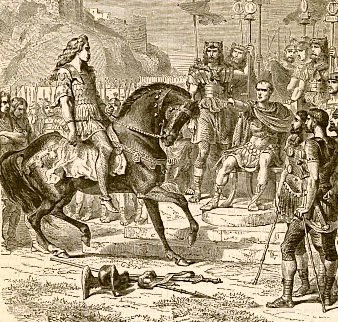 During the fourth century the Roman Empire needed manpower and money badly. It needed to maintain a big (=expensive) border force, and a lot of manpower to work in the fields. Civil wars, barbarian raids and various plague epidemics had depopulated the empire, and consequently money to pay for everything was hard to find. Taxes couldn’t be raised any further. There is a upper level to taxation, and they had reached it.

So how did the empire got manpower? They granted refugees access to the empire, usually on conditions. Tribal leaders had to convince their adherents, so they were granted Roman citizenship immediately. People with some skills often could continue their work. As for the remainder — tough luck. They were set to work in the fields or in the mines. Medieval servitude was in fact a Roman invention. Sometimes as outright slaves, more often for a limited period. Say ten or twenty years.

This had worked well in the past, but in the year 376 AD something happened with vast consequences: the Huns descended upon the Eurasian steppes. Huns were as alien to the Romans as green men from Mars are to us. They knew nothing at all about them. All they knew — and that wasn’t much — came from the Goths. The Goths were independent warlike tribes living just outside the empire. At first the Goths tried to resist the Hunnic raids, but in vain. They were defeated time and time again by the Huns.

By the year 376 they realized they couldn’t defeat the Huns, and lived in a devastated country. All they could do is gather their belongings and humbly ask admittance in the Roman Empire. On any condition acceptable to the emperor. Vast numbers of Goths showed up on the other side of the Danube river. By “vast” think in numbers over a million.

Messages flashed back and forth to the emperor, who was preparing a campaign against the Sassanids in Antioch. Valens couldn’t believe his luck. Normally he would get either manpower or money, but not both at the same time. So he gave the green light for the Goths to come right in: “Wir schaffen das!” More likely “Non possumus facere!” as Valens didn’t speak a lot of German.

And that was the moment everything went wrong. The whole operation was completely mismanaged from the beginning. Thousands drowned while trying to cross the Danube river. Which at the time was in flood, to make matters worse. People tried to swim, used hollowed tree trunks or anything that could float in order to cross over.

Once they arrived on the Roman side, they had to register. The emperor needed to know how many people came into the empire, what they could do and so on. But there simply weren’t enough clerks to do that work. Not only that, there were not enough troops present to control the situation. There wasn’t any food to speak of. The Roman officials had their own agendas: pick out the best Goths to become slaves for themselves, and sell the remainder inferior food at inflated prices.

As you can understand, the situation got out of hand quickly. Don’t forget that the Goth men were for the most part armed. A Goth was not considered a man if he was unarmed. The choice of selling of their children for dog meat or starving together didn’t really endear the Roman officials to the Goths. Nor did a bunched massacre of their leaders. Count Lupicinus followed common Roman practice by inviting the Gothic leaders for a banquet to settle differences and cut their throats. He had their bodyguards murdered, but for unknown reasons allowed the Gothic leaders out alive.

Of course those survivors raised bloody hell. They took up arms and ransacked the countryside. The whole of the Roman province of Thrace was plundered. Only cities with walls could resist the onslaught. The newly emerged Gothic leader Fritigern made his famous statement that ‘he didn’t make wars on walls’ simply because the Goths lacked the means to do it.

Valens was forced to abandon his campaign plans, to save what he could. He had to gather just about anyone available and capable of carrying arms to quell this rebellion. But he had to leave a serious force behind to keep the Sassanids at bay. On the other side emperor Gratian send a force to support his uncle. He himself was busy on the German borders on the Rhine and couldn’t gather that many troops without endangering the Rhine border. Valens was old, over 50 years. And he was highly jealous of his handsome successful and young nephew Gratian. He could have waited a couple of days, and together they could annihilate the Goths. Or fight alone, and collect all the glory for himself. What did Valens choose? Indeed, he wanted to snub his nephew and award himself Triumphal Decorations (the Roman equivalent of the Victoria Cross).

This culminated in the battle of Adrianople, a battle that the Roman Empire never recovered from. The most experienced troops were slaughtered, and Valens lost his life. It wasn’t the first time an emperor died in battle, but never had the empire lost both the emperor and his entire army.

From that moment, the empire (both West and East) went into a downward spiral. They needed the revenue of the land to pay for the army. They needed a large army to protect the land. As the Goths controlled Thracia, there was less revenue, therefore the empire could raise fewer troops, and those were of lesser quality. Which resulted in more victories for Goths and other tribal nations; that’s less land for the empire to generate revenue from. Which means budget cuts for the army — I think you get the point here.

At that time, the Roman Empire was the world’s superpower. It had an army of roughly 600,000 men. So how could an army of Goths less than 20,000 strong defeat it? Not all the Goths were warriors; many, or more accurately, most were non-combatants: women, children, elderly, etc. Nor could the Romans deploy those 600,000 troops together. Most of them were border guards (Limitanei). They had to remain in place against other possible invaders.

I think you can see the semblance with the present refugee crisis: hopelessly naive thinking, coupled with bungling incompetence, mismanagement and simple greed. It took the Roman Empire a century to die. It will take the EU less than a year, I expect.