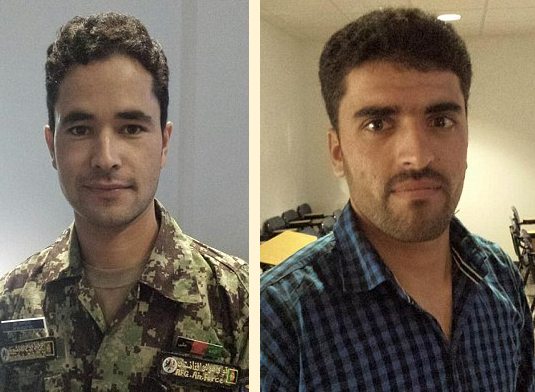 Two culture-enriching soldiers have gone AWOL from Moody Air Force Base in southern Georgia. The two men, Mirwais Kohistani and Shirzad Rohullah, are from Afghanistan, our staunch ally in the “War on Terror”. They are part of a contingent brought into the USA for training.

The fact that Homeland Security is now leading the search for Messrs. Kohistani and Rohullah is a sign that someone in high places is very worried about them. And the public release of their names and photos tells us that DHS is serious about trying to find them — or is at least engaging in advance CYA, keeping in mind recent events in San Bernardino.

And yet they tell us that “there is no evidence that the men pose a threat”. Uh-huh. Why the big media blitz, then?

We are assured that they were “screened prior to their arrival in the United States”. Uh-huh. Presumably with the same rigor that Tashfeen Malik was screened when she entered the country. That makes me feel safer.

The two soldiers have been here for ten months. Why did they wait until now to disappear? Does the timing have anything to do with the mass purchase by Muslims of hundreds of cell phones at several Wal-Mart stores in Missouri?

According to some reports, the Great Jihad of 2016 is scheduled to start on Christmas of this year. Is there a connection?

Below are excerpts from the Breitbart story:

The Department of Homeland Security (DHS), in coordination with the State Department, is leading the efforts to locate two Afghan men who were reported missing after they failed to show up for U.S. military training Monday at a base in southern Georgia, Air Force Lt. Col. Chris Karns said Friday.

Authorities have identified the Afghan nationals as Mirwais Kohistani and Shirzad Rohullah, reports USA Today. They were part of a group 23 Afghans who came to the United States in February for training at the Moody Air Force Base (AFB) near Valdosta, Georgia.

The names and passports of the men were released as part of a federal investigation to track them, reports Daily Mail.

Air Force officials maintain that there is no evidence that the men pose a threat. According to the Air Force, which was in charge of training them, both men were screened before entering the United States.

“Two male Afghan air force students did not report for duty yesterday at their regular maintenance training at Moody AFB in Valdosta, Georgia. Both are assigned to the 81st Fighter Squadron,” said Moody AFB officials in a statement released Tuesday. “They have been at Moody since February 2015 and were screened prior to their arrival in the United States more than a year ago.”

“The students have trained alongside American counterparts for the entirety of 2015 and do not pose any apparent threat,” added the statement. “There is a well-coordinated process among federal agencies to locate the individuals as quickly as possible and return them accordingly to the proper authorities to manage their present situation.”

On Thursday, Moody AFB officials reportedly stressed that the Afghan men still do not pose a threat, although efforts to locate them have been intensified.

If you happen to see either of these fellows at your local 7-11, or shopping mall, or sports arena, better reach for your cell phone and dial 911. But reach for your concealed carry first, and keep it handy — just in case.

4 thoughts on “A Walkabout in Southern Georgia”