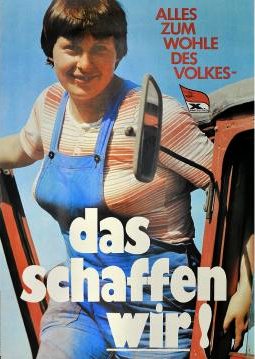 Everyone wants to know what motives Chancellor Angela Merkel has for inviting millions of “refugees” in the Middle East to come to Germany. In the following op-ed from Die Welt, Henryk Broder offers some suggestions. Many thanks to JLH for the translation:

“We can do it!” says the Federal Chancellor, like a mantra. A very similar motto was once in circulation — “That, we can do it!” It was not much use to those in power that time, either.

On the occasion of the tenth party convention of the SED[1], the party leadership commissioned ten posters which were intended to honor the role of the SED in the building of the first German workers’ and farmers’ party. On one of them, two hands intertwine powerfully, Above them is “Our Thanks to You, Party.” On another a pupil holds out a notebook in which she has written “I do my best, so do Mommy and Daddy.”

In three other similarly designed posters are a soldier, a miner and a farm woman, all offering “Everything for the Good of the People.” The soldier says “That, we can protect!”, the miner says “That, we can handle!” and the farm woman says “That, we can do!” The woman is wearing grey-blue overalls, is powerfully built and has her hair in a bob cut — and is the spitting image of the chancellor. Yes, Angela Merkel could have looked like that 34 years ago.

We don’t know the identity of the woman in the photo, who is in the act of descending from the driver’s cab of a tractor. Presumably, she is not a real farm woman, as the soldier might not be a real soldier and the miner might not be a real miner. Yet the poster is authentic in a way that reveals the observer. The sentence “That, we can do!” is an almost word-for-word pre-emption of the sentence Angela Merkel said at the beginning of September — “We can do that!” — and by doing that, unleashed a crisis that simultaneously paralyzes and worries the Federal Republic.

Merkel Rules in the Style of a Feudal Prince

Every day, millions of people wonder anew: What does the chancellor want? What are her intentions? What does the plan look like that she communicated to Anne Will[2]? Amazed, we discover that in a nation with 16 state administrations, 16 state legislatures, 16 governors, a Bundestag, an upper house, a federal president and thousands of civil servants, it is all about what the chancellor wants.

She not only decides the guidelines of policy — with a word or the stroke of a pen, she can open and close borders, abrogate laws and imperiously sweep the table clean of any doubts about the wisdom of her decisions: “We can do that!” Angela Merkel rules in the style of a feudal prince, and that includes the threat to bid farewell to the land she wanted to serve, if the people should refuse their allegiance. As yet, no chancellor has dared to be that offensive.

The poster for the tenth convention of the SED reminds us that the chancellor was socialized in the GDR, in a system which — from its first to its last day — had a dysfunctional relationship with reality. The GDR wanted to be the seventh or eighth largest industrial nation in the world. No country had more tourists than the East Berlin republic, which is connected to the fact that every transiting traveler to or from West Berlin had to apply for a visa.

There was no poverty in the GDR, no unemployment, no xenophobia, no criminality, but, on the other hand, “parade routes” like Stalinallee, which bore witness to the superiority of living conditions under working socialism. Even the weather reports were falsified, if it was too cold or too hot, to decrease the energy usage in households. Where there was a will, there was a way.

The Federal Republic on the Same Path as the GDR

“That, we can do!” refers to the work norms, the five-year plan and supplying the population with such costly consumer goods as bananas, real bean coffee and genuine chocolate. Today, “We can do that!” relates to energy consumption, giving up fossil fuels, saving the rain forests, production or marketing of electric cars and the absorption of millions of refugees from Africa, Arabia and Asia, who are to help us become or remain a diverse, open and tolerant land.

Meanwhile, local traffic is “close to collapse”, because there is no money to properly maintain the routes and the vehicles. It is just simpler to plan Utopia than to renovate a few ramshackle bridges in the Ruhr area.

It looks as if the Federal Republic is on the same path from which the GDR skidded into the abyss of history. The chancellor’s policy is the belated revenge of the GDR on the BRD. She may not be conscious of this, but it is precisely the unconscious that is especially characterized by sustainability and reliability.

The Guessing About Merkel’s Motives Will Continue

The relationship between the former GDR and the Federal Republic may be compared to a family in which the children must first be fully grown before they can repay everything that their parents have done to them. 25 years after the “reunification”, the East Germans have arrived at this point. The further back the end of the GDR lies, so much better can they recall the offenses they had to suffer after November 9th.

When thousands of West German fortune hunters invaded the GDR to con East Germans into insurance policies, sales contracts and newspaper subscriptions or grab up real estate at rock bottom prices… that suddenly changed everything for the GDR Germans. The BRD Germans kept right on, as if a garden fence somewhere in Mongolia had fallen over.

And now the Wessis are threatened with the same hardship as were their brothers and sisters, the Ossis. The GDR imploded because of emigration, the BRD is threatening to collapse under the weight of immigration. Then as now, the opening of the borders was the cause of the calamity. German destiny seems to suffer from a compulsion to repeat. Unless, in the duplication of the events, we can see an act of equalizing justice, brought on by the chancellor from the East.

So the guessing about the chancellor’s motives will go on for now. Even if she acts as if she herself doubts whether “we” can do it.

And now we should just like to know what became of the young farm woman who announced in 1981, to the honor of the SED, “That, we can do!”

Photo: Archive — Isn’t that young Angela Merkel? No, but it could be. An SED poster for the tenth party convention, 1981

24 thoughts on “The GDR’s Belated Revenge on Angela Merkel”