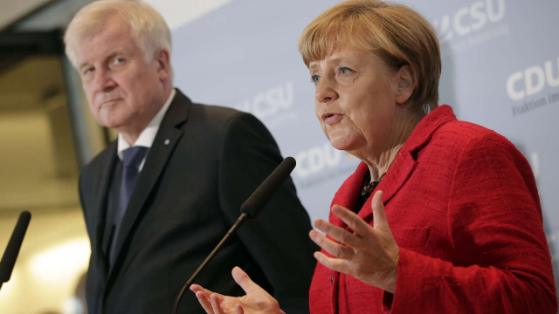 The rift within the German government over the “refugee” crisis has created a lot of headlines in Germany. The issue of family reunification for recently arrived “Syrians” — which, practically speaking, means anyone in the Third World who can raise the price of a forged Syrian passport — is what brought matters to a head.

JLH has translated an article on the topic, and includes this brief introductory note:

The mainstream media picture magazine BILD takes a look at the political upset within Merkel’s party ranks and their partner the SPD (Sozialdemokratische Partei Deutschlands, Social Democrats). One of the most intriguing remarks attached to the coverage — an insight to Merkel’s style of rule — was: Six months ago he (Thomas de Maizière) was a man with a future, Now he is a man of the past…

BILD, I suspect, is not happy to report this, but cannot ignore it.

CDU Executive Committee Comes Down on the Side of de Maizière

A political thriller a revolving around [Interior Minister] Thomas de Maizière and his controversial push to limit protection and family reunification for Syrian refugees!

After Chancellor Angela Merkel (CDU) and the head of the chancellery office Peter Altmaier (CDU) had received the interior minister’s suggestion and actually slapped de Maizière down, party allies are covering his back.

At its meeting on Monday — according to information obtained by BILD — the CDU’s executive committee stood behind Interior Minister Thomas de Maizière and came to an understanding that there should be immediate discussion of a limitation of family reunification for refugees!

Executive committee member and Commercial Secretary to the Treasury Jens Spahn told BILD: “Everyone in the CDU is in agreement with the Interior Minister that family reunification for refugees must be limited. In view of the sheer numbers of refugees, this is a hard but honest call. And we have to talk with the SPD about that.”

With the CDU executive committee, the interior minister now has important allies!

This cannot make the chancellor happy. Officially she let it be known through the government spokesman Steffen Selbert that Interior Minister Thomas de Maizière continues to have the chancellor’s unlimited trust.

De Maizière will seek the counsel of his colleagues in the various federal states in the argument that has flared up over the status of Syrian refugees in Germany.

This is what it’s about

On the objection of the SPD, Interior Minister Thomas de Maizière had to retract a directive to again check Syrians individually on whether they should receive restricted protective status, if they do not come directly from a civil war area.

SPD deputy Thorsten Schäfer-Gümbel sharply criticized coalition partners CDU and CSU on account of the most recent changes in refugee policy, and he spoke of a strain on the governmental alliance.

This raises the question of whether, within the union,[2] “a power struggle is being argued out which has been smoldering for weeks and months,” said Schäfer-Gümbel in the Morgenmagazin of the ZDF.[3]

He spoke of “permanent days of chaos” in the union. This has become “a topic of strain for the coalition.”

Schäuble, too, stands by the interior minister

Even before the executive committee meeting of the CDU, quite a few union politicians — after the retraction in regard to the continuingly high numbers of newly arriving refugees and immigrants — have expressly backed de Maizière’s demand.

On Monday, deputy CDU/CSU chief Julia Klöckner called the minister a “pioneer.” It was clear, she said, that the coalition’s decisions of the past week did not suffice to gain control of the refugee crisis.

Like the executive committee, CSU chief Horst Seehofer and Finance Minister Wolfgang Schäuble (CDU) affiliate themselves with de Maizière and demand that Syrians still be granted only a so-called subsidiary protection. That means limiting residence to a year and denying family reunion.

“Thomas de Maizière is right,” said Seehofer to the Süddeutsche Zeitung. “We must return to acting according to the law, and closely peruse the refugee status of every Syrian.”

Schäuble, too, supports his colleague. In that country torn by civil war, there are five million internal refugees, said the CDU politician on Monday in Berlin in a talk for students: “If all of them come to Europe, instead of efforts being made to solve the problems in Syria, then the situation will not be resolved.”

Not until Saturday did he point out in the ARD[4] broadcast “Report from Berlin” that this was in accord with international and European law: “We must, of course, limit family reunification, because our capacity to absorb is not unlimited,: he said. “I consider that a necessary decision and I am very much in favor of quickly coming to an agreement on that in the coalition.”

What does the press have to say?

The Süddeutsche Zeitung chose the headline, “One Solo Too Many.” “Nonetheless, the minister is not so wrong in feeling that he has touched on something that everyone is thinking about. It is just that no one wanted to talk about it.”

The opinion in the Frankfurter Allgemeine Zeitung is that the minister “said a few things at the wrong time. One thing yet again catches our attention. He tends to underestimate the importance of partisan backup for pragmatic political decisions.” Nevertheless, another article says, “Federal Minister Thomas de Maizière’s comment… only poked the open wound in the coalition. The suggestion is exactly correct and it will eventually turn out that way for the refugees in Syria,”

For Die Welt, de Maizière is a minister who is “rehearsing insurgency.”[5] What is bugging him? “So many in the union — and besides, on the quiet in the SPD — are of the opinion that the number of refugees must be limited quickly and in the long run.”

9 thoughts on “Power Struggle in Berlin”