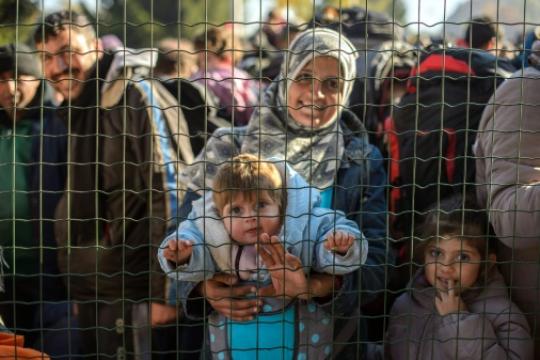 We’ve all seen those heartrending and/or uplifting photos of “refugees” arriving in Europe. The earnest-looking fathers and mothers (mom always in hijab) with their tiny adorable children, waiting behind a fence in awful conditions, but remaining stoic and cheerful in the face of their misfortune. The tear-jerking images fill the vidscreens, from a dead toddler on the beach in Turkey through the crying children on Kos to a fallen woman with a baby being protected by her husband on the railway tracks in Budapest.

And we can expect the heartbreaking tableaux to reach ever-greater levels of pathos — soon they’ll be freezing in Munich and Berlin, if they aren’t already.

Yes, we’ve all seen those photos and videos, and we all know they’re a misrepresentation of the facts. Or we should know — anyone with the mental acuity of a bag of hair can understand that.

It’s true that those are real people, those crying babies and distraught mothers, but they are hardly representative of the vast majority of migrants. If you watch the raw video footage of the huge clots of refugees in Serbia or Slovenia, you can count twenty or thirty healthy single young men walk by before you see a family with kids. For every wailing baby there are dozens of unkempt young punks who shout, make demands, act aggressively, cause trouble, and fight with other refugees. They’re thieving and raping their way to the Promised Land: Germany, where they can continue their favorite pastimes in their new home.

It’s been obvious from the start that the “refugee” photos we see in major media outlets are carefully chosen for their eye-appeal from among hundreds or thousands of others in order to convince the viewing public that what they are seeing is something entirely different from the reality behind the façade. What’s unusual about the following account, however, is that a media editor actually acknowledges what’s going on.

Many thanks to JLH for translating this op-ed by Christian Ortner from Wiener Zeitung:

You Notice the Deception and You Are Upset

The reporting of many German-language media on the refugee crisis is a crisis of its own.

A journalist “must not make common cause. Not even with something good,” as Han-Joachim Friedrichs, an icon of German journalism, once precisely formulated one of the central dogmas of this profession.

If this dogma is taken as seriously as it should be, many media in German-speaking territory have been doing a pretty bad job in recent months. Because media people in past weeks have excessively “made common cause” with that cause which they found — in accordance with their personal inclinations — to be the good one in the immigration drama. Indeed, on both sides of this cultural battle, among the numerically dominant “welcome” journalists as well as the minority of friends of the fence.

So just recently the editor-in-chief of the ARD[1], Kai Gniffke, had to admit what many viewers have known for a long time: “When camera people film refugees, they look for families with small children who have big, saucer-eyes.” The fact is, however, according to the editor-in-chief, that “80% of the refugees are lone, powerfully built, young men.” A phenomenon that must also not be unknown to Austrian TV viewers.

It was not the only manipulation in the interests of the presumably good cause in German state television. ARD jazzed up a meagerly attended chain-of-lights demonstration organized by the SPD for asylum seekers by using video from a large demo against the Iraq War in 2003. And suddenly there was a large demonstration to be seen, while in reality there was only a thin line of demonstrators.

Making common cause with what he considered the good side in this culture war — this time on the other side — a leading journalist for the Kronen Zeitung presented his readers with alleged misdeeds of immigrants, which did not withstand investigation. (It is also noteworthy that the man apologized and admitted his mistake.)

It does not take much pessimism, in view of these and countless other less spectacular examples, to presume that they further erode the already shaky relationship of trust between media and media consumers. Suspicion of not being properly informed by the media is spreading like measles in an unvaccinated elementary school class.

How severe this loss of trust is in Austria we do not know. For Germany, the Forsa-Institute[2] has just published a representative poll. Almost every second respondent (44%) agreed with the “lying press” concept, according to which the media in Germany “are entirely directed from the top” and therefore spread “sugarcoated and irrelevant reports.”

Of course, that is greatly exaggerated — but no surprise when media and the makers of media forget that they “must not make common cause, even with something good.”