UPDATES — Newest are at the top

10:31pm EST — From Vlad: A suspect arrested in Paris reportedly told police: “I am from ISIS.” 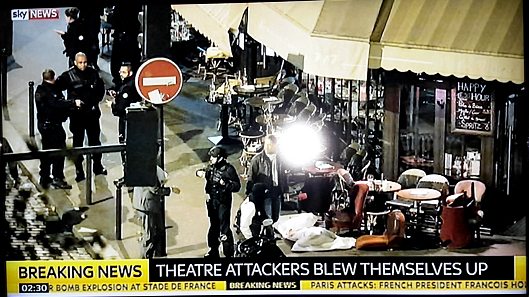 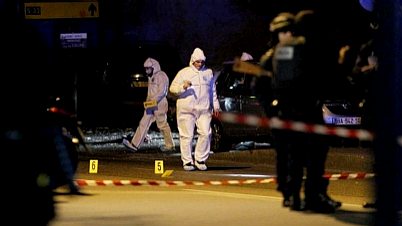 His caption: “Definition of ‘idiot’: A guy in a CSI outfit treating an act of war as if it was a domestic assault”

Commentary from the translator first:

This President Hollande actually says this in front of the Bataclan — where he has gone very quickly with his whole circus, the execrable Minister of Interior (who has TWO complaints against our friends from Riposte Laïque before the courts for having called him “friendly towards Islamists”) included, and of course the first whore for Islam, the Mayor of Paris, Anne Hidalgo.

Before the Bataclan, Francois Hollande reassures his audience: “We must be there among all those who have seen these awful things we will not let ourselves be intimidated. We will lead the fight. It will be merciless…” “When terrorists are capable of such atrocities they must be certain that they will have to face a united and determined France , added the Head of State who evokes an act of “barbarism.”

7:53pm EST — Geert Wilders on Twitter @geertwilderspvv: Paris under attack. This is war. Nothing less.

From Le Figaro, translation by Oz-Rita:

Bataclan: Around a hundred dead, three terrorists killed, Hollande is going there. According to police sources quoted by AFP, about 100 people were killed during the attack at the Bataclan. According to the same sources, three suspected terrorists were killed. Hollande, Manuel Valls (Prime Minister), Cazeneuve, minister of the Interior and [the ghastly] Christian Taubira, Minister of Justice, are going there now.

Also: The Paris Metro has been closed, according to the Australian Foreign Minister.

7:21pm EST — From Vlad: Sky News just said 100 people may have been killed in the concert hall.

“I have heard shots (explosions?) at the level of ‘Les Halles’ (2nd arr.) we had to leave running (order of the cops).”

Gateway Pundit: Geraldo Rivera’s daughter was at the stadium where one of the attacks occurred, but was reportedly unharmed.

Bld. Beaumarchais (between Bastille and Jewish Quarter – Le Marais) is in lock down. Civilian police shouting “Go home, there are terrorists”.

The GIGN [Groupe d’Intervention de la Gendarmerie Nationale, counter-terrorism forces] have been sent to “les Halles” in the centre of Paris [near the Town Hall]

From Vlad Tepes: “Sky News in Australia is reporting two terrorists have been killed at the Theatre. Footage of hostages escaping theatre.”

I have just heard BBC say the following: “We have to announce that apparently according to a witness the attackers have shouted Allahu Akhbar. HOWEVER, we cannot say what kind of allegiance — if any — that signifies.

The attackers at the Bataclan: Two young ones; one of them has explosives strapped to himself — suicide bomber?

Video interview: Police have stormed the Bataclan. They say new attack took place near the Bastille, which is close to a traditional Jewish area.

6:32pm EST — More explosions have been heard. Muslims in Paris have reportedly been observed celebrating.

Hostages are being murdered one by one at the Bataclan.

Paris Hospitals are on the “White Plan” for urgency and crisis.

French Schools closed tomorrow Saturday (usually they have school on Saturdays in France).

A major jihad attack was launched tonight in Paris, and is ongoing as I write this. Dozens of people have been killed (more than 40 the last I heard) and hostages taken in a theater. Bodies are lying in the street. As of five minutes ago, more reports of gunfire were coming in from different locations.

President Francois Hollande has declared a national state of emergency. France will reportedly close its borders.

“In the Bataclan [theater] the shooters shouted ALLAHU AKHBAR according to a witness who sounded very emotional having just escaped from there.”

See The Daily Mail for more.

I’ll add more information and links as they come in.

119 thoughts on “Jihad Attack in Paris”