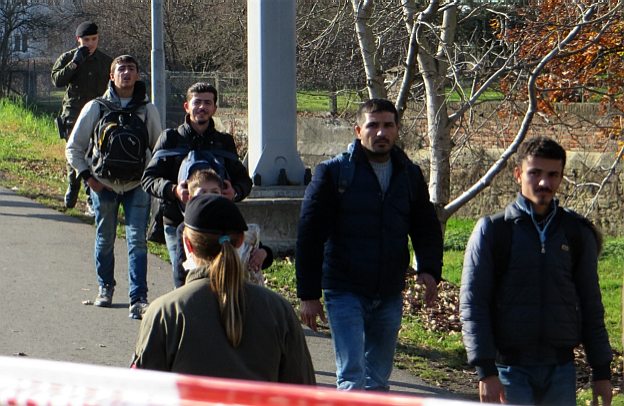 The Austrian town of Spielfeld has been in the news a lot lately, due its location adjacent to the border crossing with Slovenia where thousands of “refugees” pass through every day on their way to Germany. Spielfeld is not the only entry point being used, however. Bad Radkersburg, somewhat to the east of Spielfeld along the River Mura, also has a border crossing where the migrants enter Austria.

Just across the river in Slovenia is the town of Gornja Radgona. Immigrants who do not immediately transit through to Austria are accommodated there overnight in a warehouse.

The media features about the “refugees” always show columns of migrants walking, as if they had walked all the way from the ferry terminal at Piraeus to the Austrian border. But the total distance walked by any given immigrant during his journey from Greece is very small, a few kilometers at most. The rest of the trip is spent on buses and trains, with the costs paid by someone else — no migrant ever has to purchase a ticket after his initial payout to the people-smugglers.

The following video will make clear how short a distance the “refugees” have to walk on the final leg of their journey to Austria. They get off the bus in Gornja Radgona, and if it is late in the day they are housed overnight in a heated warehouse — with food, water, clothing, and shoes provided at no cost to themselves. The next morning they walk 500-1,000 meters (450-900 yards) across the bridge to Bad Radkersburg in Austria. After being processed by Austrian border officials they board another bus — again, free of charge — for the trip to Germany, the Land of Milk and Welfare Benefits.

And, as the photo at the top of this post reminds us, it’s also the Land of Uncovered Meat for all those young sex-starved male culture-enrichers who make up the vast bulk of the migrating horde.

Last Thursday Elisabeth Sabaditsch-Wolff, reporting on behalf of Bürgerbewegung Pax Europa, visited the warehouse in Gornja Radgona where “refugees” are accommodated until they can cross the border into Austria. She interviewed the woman in charge of the facility, who was kind enough to show visitors around and answer a few questions.

Many thanks to R.K. for recording this video, and to Vlad Tepes for editing and uploading it:

Below are some more photos from the border area at Gornja Radgona.

According to Elisabeth, on the Austrian side donations such as these are actually provided by the government at taxpayers’ expense. But here in Slovenia, they truly are donated: 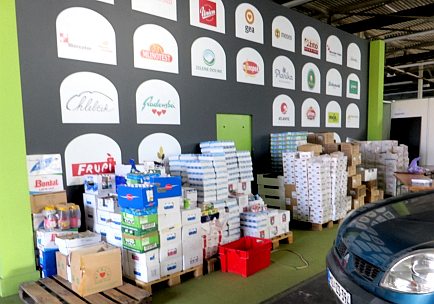 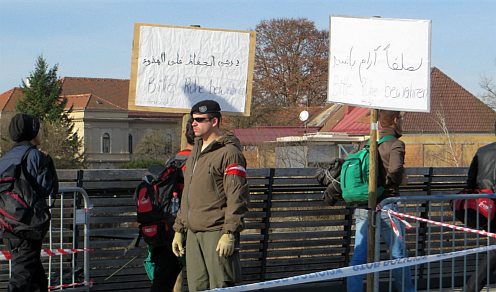 The authorities have erected signs along the footpath of the bridge over the Mura giving the migrants instructions in German and other languages. A close-up of the previous photo is instructive: 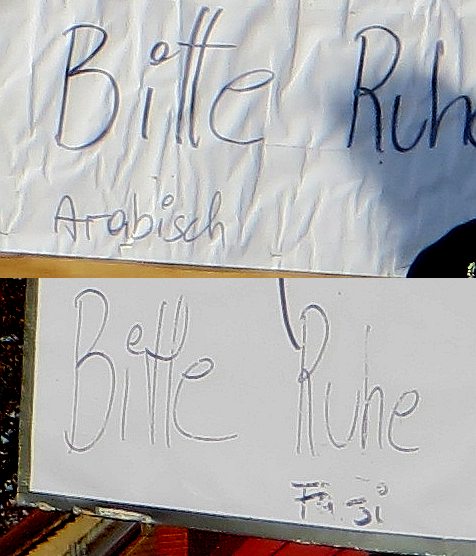 The signs are labeled — presumably for the benefit of the Slovenian or Austrian employees who have to set them up — as “Arabisch” (Arabic) and “Farsi”.

I thought all these longsuffering people were Syrian “refugees”. Why do any of the signs need to be in Farsi?

Iran is not a war zone. The Austrian government has friendly, even cozy, relations with Iran. How can any Farsi-speakers possibly qualify as refugees?